I am reading about the quantile function, but it is not clear to me. Could you provide a more intuitive explanation than the one provided below?

All this may sound complicated at first, but it is essentially about something very simple.

By cumulative distribution function we denote the function that returns probabilities of $X$ being smaller than or equal to some value $x$,

This function takes as input $x$ and returns values from the $[0, 1]$ interval (probabilities)—let's denote them as $p$. The inverse of the cumulative distribution function (or quantile function) tells you what $x$ would make $F(x)$ return some value $p$,

This is illustrated in the diagram below which uses the normal cumulative distribution function (and its inverse) as an example. 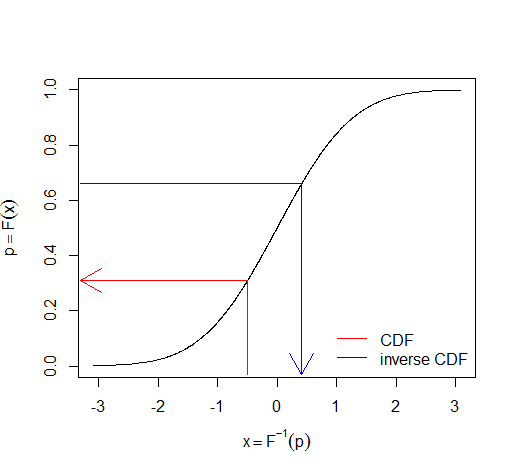 As an simple example, you can take a standard Gumbel distribution. Its cumulative distribution function is

and it can be easily inverted: recall natural logarithm function is an inverse of exponential function, so it is instantly obvious that quantile function for Gumbel distribution is

As you can see, the quantile function, according to its alternative name, "inverts" the behaviour of cumulative distribution function.

The definition, translated to plain English, says that for given probability value $p$, we are looking for some $x$, that results in $F(x)$ returning value greater or equal then $p$, but since there could be multiple values of $x$ that meet this condition (e.g. $F(x) \ge 0$ is true for any $x$), so we take the smallest $x$ of those.

Functions with no inverses

In general, there are no inverses for functions that can return same value for different inputs, for example density functions (e.g., the standard normal density function is symmetric, so it returns the same values for $-2$ and $2$ etc.). The normal distribution is an interesting example for one more reason—it is one of the examples of cumulative distribution functions that do not have a closed-form inverse. Not every cumulative distribution function has to have a closed-form inverse! Hopefully in such cases the inverses can be found using numerical methods.

The quantile function can be used for random generation as described in How does the inverse transform method work?

Chapter 2 of the book "Statistical Distributions" by Forbes, Evans, Hastings, and Peacock has a concise summary with consistent notation.

A quantile is any possible value (e.g. in context of a random draw) of a variable, that is, a variate. The authors give an example of a sample space of tossing 2 coins as the set {HH, HT, TH, TT}. The number of heads in that sample is a quantile of the ordered set {0, 1, 2}.

For a probability distribution or mass function, you are plotting the variate on the x-axis and the probability on the y-axis.

If you knew the probability and the function and wanted to deduce the variate on the x-axis from it, you would invert the function or approximate an inversion of it to get x, knowing y.

The CDF (cumulative distribution function) is more convenient as the function plotted is increasing along the x-axis and the y-axis. Extracting the quantile, that is, the variate from CDF is usually easier math.

There are a few diagrams in the book demonstrating properties of the discrete probability distribution, and the CDF in chapter 2 and those are shown in answers posted to your question above this one also (though I can't see them while I'm typing this answer).

Table 2.1 has a concise summary of many terms and item 4 is for the inverse distribution function or quantile function (of probability alpha) and refers to determining x from the inverse function which takes the probability as an argument.

The book is a practical handbook on the subject with examples, though implementing the inverse functions requires other resources (like pre-computed tables findable at NIST or published approximation algorithms etc. https://www.itl.nist.gov/div898/handbook/eda/section3/eda367.htm).

(NOTE: everything past the 1st sentence was added in response to the comment from gung.)

25
How does the inverse transform method work?
4
How to convert percentage values from 7 point scale to 5 point scale?
6
Questions regarding proof of probability integral transform
8
Sample uniformly from unit square conditioned on sum and product
6
Inverse function for a non-decreasing CDF
5
Calculating probability that a probability of heads lies in a given interval
3
Using Standard Deviation and Flipping Coins
2
the two step approach
2
Intuition behind F(X) following a uniform distribution
1
Inverse Transformation Sampling with Gaussian
See more linked questions

2
Inconsistency between sample median and theoretical median for skewed normal using rsnorm in fGarch
8
How to obtain the quantile function when an analytical form of the distribution is not known
3
How to calculate quartiles and other percentiles?
2
Python: Gaussian Copula or inverse of cdf
1
Efficient estimation of conditional means from pdf, CDF, & quantile function supplied numerically
2
How is that possible, that in R, SAS or other packages there are so many ways to calculate quantiles? Isn't median just median?
1
qrule mathematic interpolation in quantile estimation in R survey package