Why does the continuity correction (say, the normal approximation to the binomial distribution) work?

I wish to better understand how the continuity correction to the binomial distribution for the normal approximation was derived.

What method was used to decide we should add 1/2 (why not another number?). Any explanation (or a link to suggested reading, other than this, would be appreciated).

binomial asymptotics
share|cite|improve this question
edited May 23 '16 at 1:18 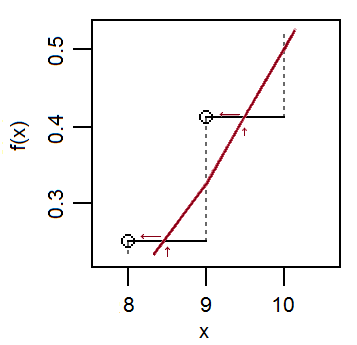 I believe the factor arises from the fact that we are comparing a continuous distribution to a discrete. We thus need to translate what each discrete value means in the continuous distribution. We could choose another value, however this would be unbalanced about a given integer. (ie you would weight the probability of being at 6 more toward 7 than 5.)

Not the answer you're looking for? Browse other questions tagged binomial asymptotics or ask your own question.

0
Approximating a discrete distribution with a continuous distribution: why add/subtract 0.5/N?
2
What does *correct for continuity* mean?
1
Mann-Kendall trend test, z-Transformation of test statistic, Why is the mean +/-1?
0
Can someone please explain ‘why’ one standard deviation of the number of heads/tails in reality is actually proportional to the square root of N?