Why is my Spearman's Rho result contradicting my Wilcoxon matched pairs?

In brief I'm trying to find out if 62 people perform better on test one or test two.

I ran a Spearman's rho and it has come back positive and significant with a moderate strength. I.E As the test 1 scores increased so did test 2 scores increase.

However when I ran the same data through a Wilcoxon matched pairs it has come back significant but showing that the ranked means and medians were lower for the second test than for the first. I have checked the data 3 times and it always comes back the same.

Can someone help me understand why this might be happening please?

There's no contradiction whatever. Those outcomes are perfectly consistent with each other.

Populations might differ in location (one way of getting a good chance of rejection in the Wilcoxon signed rank test) while being correlated (leading to likely rejection in the test of Spearman's rho).

The significant result for the correlation measure tells you nothing about the relative size of the values on the two tests, only that they tend to move in the same direction (broadly, the same people tend to do well or poorly on both)

* or indeed any other common measure of correlation. 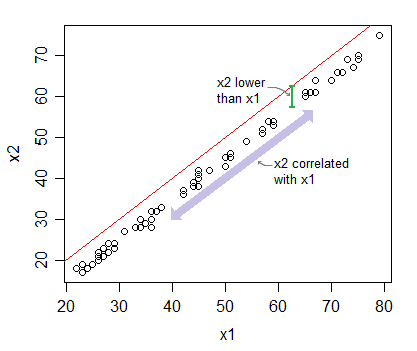 showing that the [...] medians were lower for the second test than for the first.

Actually rejection in the Wilcoxon signed rank test doesn't necessarily indicate that. If the assumption of symmetry holds, this should tend to be the case*, but in general rejection by the Wilcoxon signed rank test doesn't imply a difference in population medians is non-zero but rather that population pseudo-median of the differences** is nonzero.

* 1. In a symmetric population the pseudomedian is same as the median but in a sample they can still differ. 2. You're talking about the difference in medians rather than the median of the differences, in general all three things may be different in populations or in samples.

**(the population quantity corresponding to the Hodges-Lehmann estimator)

The population pseudo-median is the median of pairwise averages among all possible pairs in the population. It's sometimes said to be "like the median" but the two can be different (and can differ in sign).

Here's an example illustrating that the median difference and the difference in medians needn't even have the same sign: 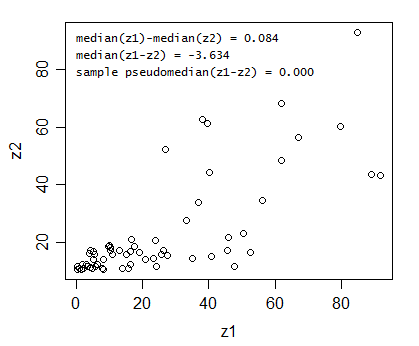 Not the answer you're looking for? Browse other questions tagged statistical-significance spearman-rho wilcoxon-signed-rank or ask your own question.