Stepwise regression in R - How does it work?

I am trying to understand the basic difference between stepwise and backward regression in R using the step function. For stepwise regression I used the following command

I got the below output for the above code. 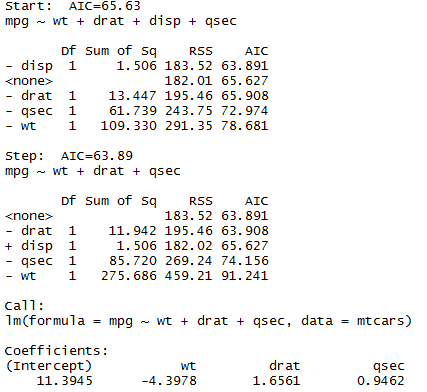 For backward variable selection I used the following command

And I got the below output for backward 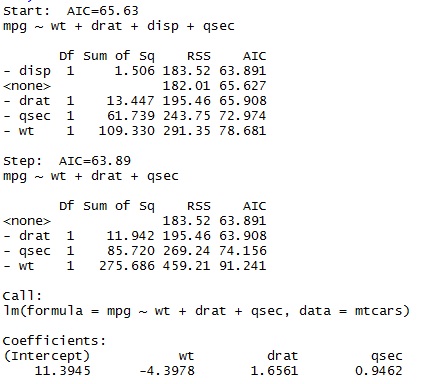 I really want to understand how this function is working in R. Thanks in advance for the help!

Perhaps it would be easier to understand how stepwise regression is being done by looking at all 15 possible lm models.

Here's a quickie to generate formula for all 15 combinations.

AIC values for each of the model are extracted with:

If the model do not remove anything (none), then the AIC is still 65.63

Basically the summary reveal the all possible stepwise removal of one-term from your full model and compare the extractAIC value, by listing them in ascending order. Since the smaller AIC value is more likely to resemble the TRUTH model, step retain the (-disp) model in step one.

The process is repeated again, but with the retained (-disp) model as the starting point. Terms are either subtracted ("backwards") or subtracted/added ("both") to allow the comparison of the models. Since the lowest AIC value in comparison is still the (-disp) model, process stop and resultant models given.

With regards to your query: "What is the function trying to achieve by adding the +disp again in the stepwise selection?", in this case, it doesn't really do anything, cos the best model across all 15 models is model 11, i.e. lm(mpg ~ wt + drat + qsec).

However, in complicated models with large number of predictors that require numerous steps to resolve, the adding back of a term that was removed initially is critical to provide the most exhaustive way of comparing the terms.

Hope this help in some way.

Here a simplified response. First, both procedures try to reduce the AIC of a given model, but they do it in different ways. Then, the basic difference is that in the backward selection procedure you can only discard variables from the model at any step, whereas in stepwise selection you can also add variables to the model.

About the output in the stepwise selection, in general the output shows you ordered alternatives to reduce your AIC, so the first row at any step is your best option. Then, there is a +disp in the third row because adding that variable to your model would be your third best option to decrease your AIC. But obviously, as your best alternative is <none>, that means not doing anything, the procedure stops and gives you the same results as in backward selection.

4
Backward selection for Cox model using R
0
Coefficient with a high cor and low p-value in a high R² regression. How to interpret?