I am somewhat unsure how to interpret some result from an analysis that I have done on two independent variables and a dependent variable. My goal is to test whether the abnormal return difference on low and high market beta stocks can be explained by skewness.

To do this I have used double sorts, first sort on beta variable, then on skewness variable – calculated the value weighted returns to the portfolios then ran a time series regression of the portfolio returns on factors from an asset pricing model (Fama French + Carhart). The results are in the first picture: Q1:Q4 portfolios of low to high beta (average skewness), R-RF is excess returns, a is the time series intercept, B the realized beta of the portfolio.

I have also added in the second picture the same analysis only with beta as a sort variable.

How should I interpret the effect on beta from controlling for skewness? Is the difference portfolio of alpha (Low - High) with t-statistic of t=1.72 and below t=2 enough power to reject a null hypothesis of no difference in abnormal returns between Low and High beta portfolios? 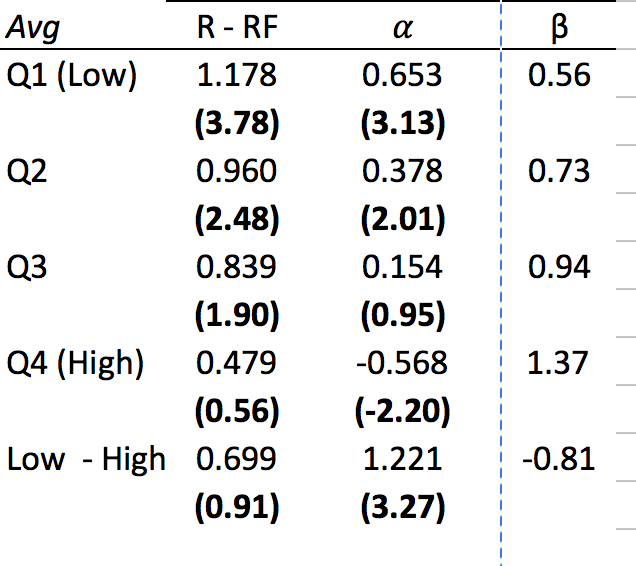 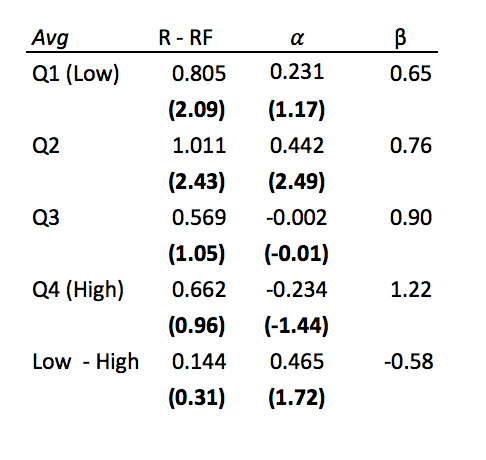 regression time-series
Share
Improve this question
asked May 26 '16 at 20:46

Caveat, I haven't thought about skewness issues much, so there's a chance I'm missing something. Several comments: