A way to show Simpson's paradox is happening in the data

I'm not entirely sure what I am talking about is Simpson's paradox, because an opposite relationship does not appear when you combine two data sets, but merely a different one. Still, I think it is some variation of the paradox.

I present below some data I am working with, made generic as X and Y.

Here are the relationships in question uncombined: 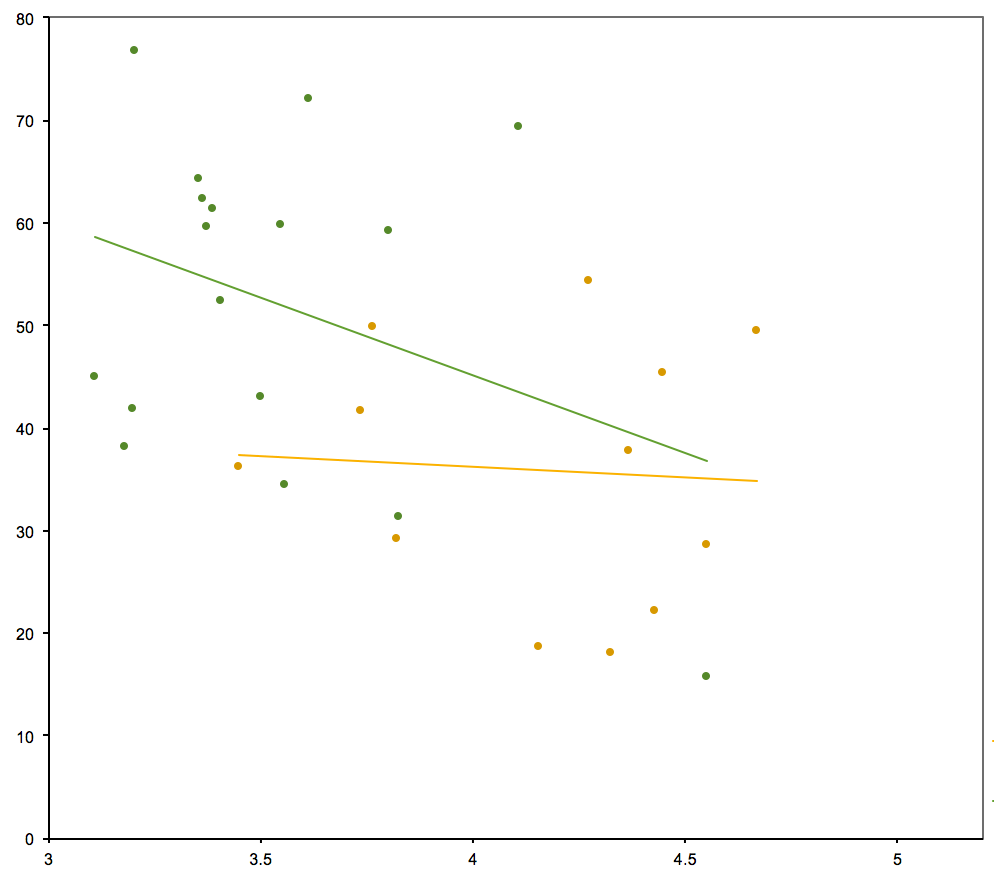 What I want to know is there any kosher way to say—or to show statistically—in a publishable paper that a strong negative relationship may only appear when these datasets are combined due to the following: The datapoints for Y in the green set are generally higher than the Y datapoints in the yellow set, and the datapoints for X are generally smaller for green than they are for yellow?

I have asked my statistician working with me on this, and he does not know of any such way, but he advised me to seek out a way to do it, if feasible.

Here are the data for these two sets, color coded:

You can call it "confounding" or "omitted variable bias":

Both are describing the same problem in different words. Simpson's paradoxon can be viewed as an extreme case of those phenomena.

When I reread your post I was somehow unconfortable about my answer because usually, we want to avoid confounding/omitted variable bias but it seems that you are preferring the "crude", unadjusted relationship between $X$ and $Y$.

Usually, we first describe the crude relationship and then revise it by confounder adjusting it. But I am sure also the converse can be useful in some cases.

Now, how can you "quantify" confounding? In a regression setting, you would compare the estimated slopes between two regressions both run on the pooled data set: One by regressing $Y$ on $X$ and a more complex one by regressing $Y$ on $X$, $\text{Color}$ and eventually on the interaction of $X$ $\text{Color}$ (then you have two comparisons to make). It is a very broad topic, so it is difficult to provide a complete answer.

However, Simpson's paradox is just a special case of a more general phenomenon. If the third variable, we could call it Z (or in our case color), is not perfectly uncorrelated with X and Y, then the apparent relationship between them will change when we take Z into account. Whether or not the sign flips is dramatic, but not necessarily substantively important. Consider a case where the correlation changes from $r = .1 \rightarrow r = -.1$, and compare that to a case where the correlation changes from $r = .9 \rightarrow r = .1$. In which case might the change have been more important? I suppose it depends on the subject matter, but my first guess would be the latter. For a fuller treatment of this topic, it may help to read my answer here: Is there a difference between 'controlling for' and 'ignoring' other variables in multiple regression?

At any rate, you want to show that this is what is going on in your data. To establish this, you just have to show that the correlations between color and X, and between color and Y, are not exactly 0 in your sample (you don't need hypothesis tests). You can do that by reporting the two correlations. If you want to make a statement about the values of X and Y differing by color in the population, you could do a couple of t-tests. If you wanted to determine if the relationships between X and Y were the same in both color groups, you would fit a multiple regression model with an interaction and see if the slopes and intercepts were close enough for your purposes to state that the differences 'might as well be 0 for all you care'. (Note that this is an equivalence test, which is an inversion of the more typical logic of hypothesis testing. To understand this more fully, it may help you to read my answer here: Why do statisticians say a non-significant result means “you can't reject the null” as opposed to accepting the null hypothesis?)

Here are examples of the analyses I've discussed, coded in R:

Not the answer you're looking for? Browse other questions tagged correlation pearson-r simpsons-paradox or ask your own question.

47
Why do statisticians say a non-significant result means “you can't reject the null” as opposed to accepting the null hypothesis?
50
Is there a difference between 'controlling for' and 'ignoring' other variables in multiple regression?