How can I find the field which most affects or contributes to decision making in a machine learning algorithm?

Consider the example below. On a larger dataset, it would be fairly obvious that name and gender are not a good indicator of whether a person is an adult or a kid, and that it's age which best decides the class.

How can I use statistics or an algorithm or a function / parameter in say, R to understand which column / field most affects the class I'm trying to predict.

r machine-learning feature-selection
Share
Improve this question
edited May 29, 2016 at 16:10

There are many ways to do this work. It's been called, variable importance, feature selection, ranking, ... in different fields.

These are some ideas:

I have used all of these in MATLAB. Unfortunately, I don't know about them in R.

I'll just give some R examples to demonstrate what @PeyM87 already mentioned, including feature filters and wrappers, and classic feature correlation (using data from the small mtcars dataset):

And here a feature wrapper example (using caret recursive feature elimination), which states the actually most important features for the target variable by including model training in the process:

Note that those approaches give similar but not exact same results.

Alternatively, after training a model on predicting the target variable, the variable importance for some models can just be stated:

And in case your data would only have numeric features you could also employ classic correlation, PCA, and similar approaches that only work with numeric values. Here's a feature correlation example that shown correlation between features and the target variable: 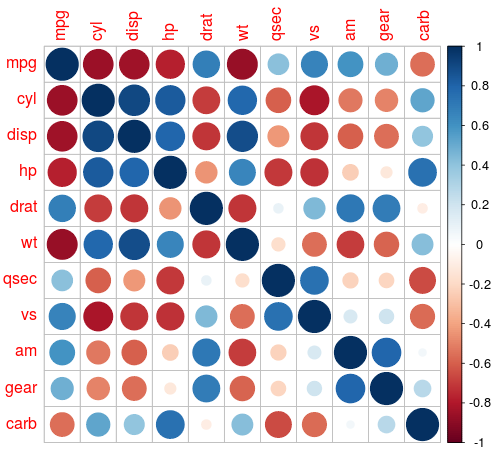 You can also reduce features by selecting them so that the maximum correlation is bounded (exclude the target variable from the process): 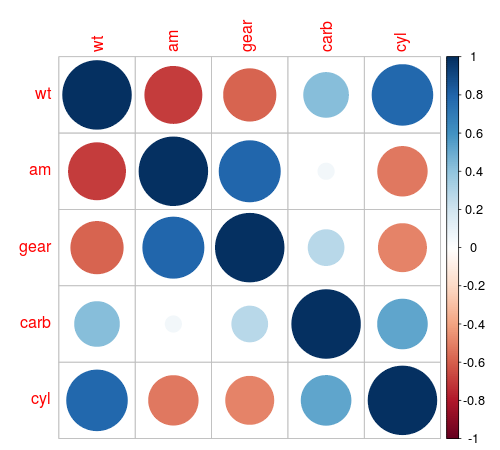 Not the answer you're looking for? Browse other questions tagged r machine-learning feature-selection or ask your own question.

2
Asymmetrical selective sampling for linear classification
6
Fisher Distance for feature selection
6
How to store (and analyse) multi-answer multi-choice questionnaire data
7
In neural networks, how to tell the feature which contributes the most to the output value?
0
Machine Learning - How to use a classifier to find the most likely model
1
In machine learning how to find feature interdepencies?