Likelihood of observations for HMM with continuous state and observation distributions

The conditional CDF is

and is artificially defined to exist anywhere, being $F_X(x)$ where $f_Y(y)$ is too small. The same for conditional density.

This is my question.

What have I tried:

The advices I found so far look corresponding to a discrete HMM, where we can easily calculate probabilities of hidden states and observations.

Google told me that I can use Forward algorithm to compute probability of observations given the model $$P(O_t\mid \{\pi,\mu,\nu\}) $$ that I can use to compare models.

Where probabilities $\alpha_t(j)$ for each state $j$ are computed as:

So, my attempt is

where nu_grid and mu_grid are values of respective densities on the grid with $\Delta x = 0.02$.

But this gives me very big value 1.802114e+226 that cannot be probability. This seems to be mathematically correct result of such an expression, because it is related to integrating conditional densities over their condition, which means that I made a mistake somewhere earlier.

I have already(yesterday) determined that my model belongs to General State Space models, and Particle filter seems to be a particular case. Formulas I found so far are very close to what I need and the model setup seems similar to mine, but the resulting equations (one, two) are a bit confusing to me and until now I couldn't understand how to implement them in the code.

According to it, my likelihood should look like (lets forget at the moment about initial distribution):

where $O_t$ are my observations. The probabilities in the product are estimated as

which seems to exactly correspond to the distribution $\alpha_t$ that is computed in my algorithm (see quote) and for which I have CDF and can easily sample from. The supporting theory that I have for my algorithm defines $\alpha_t$ as:

With this approach, I get values of magnitude like 1e-17 or even 1e-30 for both real and estimated model. I don't know whether it is correct, I found even lesser values here. Maybe the algorithm is correct, but I don't see the growth of likelihood for iterative models $(\pi^{\text{est}},\mu^{\text{est}}, \nu^{\text{est}})$ and don't know whether it is the problem of my algorithm of the likelihood is computed incorrectly. Searching for the answer, I keep question still open and welcome any suggestions.

EDIT 2. The problem was in my model - incorrect computation of backward (smoothing) distribution. After fix, model can detect the difference between two data sets: 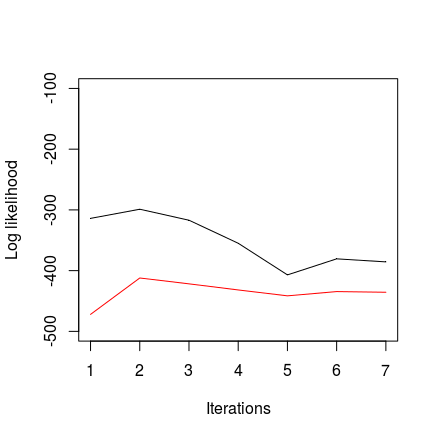 Thanks to everybody and good luck!

Hidden Markov Models are designed with discrete state distributions in mind. Consider instead something like a Kalman Filter, which is built around continuous state distributions. The dynamics are limited to being Gaussian, and so you may want to use the extended Kalman Filter or a particle filter if your situation requires it.

Not the answer you're looking for? Browse other questions tagged estimation likelihood hidden-markov-model or ask your own question.