Which observed frequency in a 2x2 contingency table is responsible for rejection of H0?

I'm carrying out a study on reported deaths of vultures (Gyps fulvus) in the Apennine mountains, Italy. I've performed a chi-square test on a 2x2 contingency table relating gender (male, female) to age (adult, subadult). Data are as follows: adult males= 8; adult females= 13; subadult males=13; subadult females= 4. The chi-square is 5.5981 p=0.018, so the two variables (gender, age) are not independent. Is there a method to calculate which observed value/s is/are significantly different from expected value/s? I.e. is the rejection of H0 depending on which particular cell value/s?

At the left is your table and at the right is a generic $2\times 2$ table showing the counts $a$ through $d$, marginal subtotals, and total $n=a+b+c+d$.

In the $\chi^2$ analysis of this table, the row totals $a+b$ and $c+d$ are fixed and so are the column totals $a+c$ and $b+d$ (and so, therefore, must the total count $n$ be fixed). We contemplate varying the cell counts $a, b, c, d$ randomly subject to these constraints.

In this model, the total count acts like a conserved quantity in physics, such as the total amount of water in a (non-leaky) pipeline: counts can move around and reside in different parts of the system (the cells), but they cannot just disappear or grow.

The fixed column totals could be viewed as dual pistons, as shown in the figure. 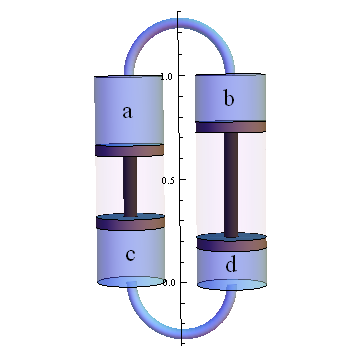 If the pistons were sealed, nothing could change. But these are connected at their tops and bottoms by two narrow pipes. Those pipes permit water to flow between $a$ and $b$ and between $c$ and $d$. We may therefore vary, say, the amount $a$ by pushing or pulling on the left tie rod. Pushing it up, for example, causes water to flow out of $a$ and into $b$. However, because the total amount of water in any isolated part of the system is conserved, the total in $a$ and $b$ remains constant. In the example, that total would always be $21$, the first row sum.

Similarly, the bottom pipe permits flow between $c$ and $d$, but conserves the total $c+d=17$ (the second row sum).

In this fashion these two connected dual pistons physically enforce the four marginal constraints in the table: all row sums and all column sums remain constant.

The "one degree of freedom" is afforded by our ability to move either of the tie rods. When we do so, the water flowing out one pipe and back in through the other forces the tie rod in the other piston to move in the opposite direction. 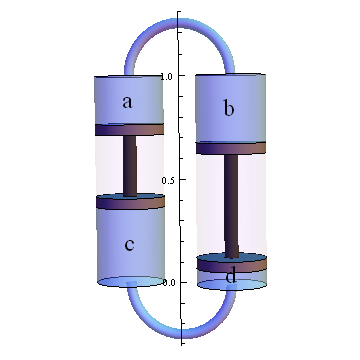 In this new configuration, the left tie rod has been pushed upward, reducing $a$ and thereby increasing $b$ and $c$ at the expense of $d$.

The first figure shows the system at "equilibrium" where the relative amounts of water in each piston are the same: $a:c$ equals $b:d$. These are the "expected values" of the table. The amount of flow that occurred in going from the first figure to the second affects $a$, $b$, $c$, and $d$ equally. These changes are the residuals. The test of independence in a two-way table adopts the null hypothesis that the pistons have varied only randomly from their equilibrium position. The $\chi^2$ statistic measures how much variation there has been. Exactly the same amount of variation occurs in each cell (up to sign).

Our conclusion is that because water (=counts) is conserved, all residuals are equal in size. Furthermore, the residuals for $a$ and $d$ have the same sign, which is opposite the sign of the residuals for $b$ and $c$. Consequently, we cannot attribute any deviation from equilibrium to any particular cell: they have all been affected equally.

Not the answer you're looking for? Browse other questions tagged chi-squared-test contingency-tables or ask your own question.