To demonstrate the concept of Naïve Bayes Classification, consider the example displayed in the illustration above. As indicated, the objects can be classified as either GREEN or RED. My task is to classify new cases as they arrive, i.e., decide to which class label they belong, based on the currently exiting objects.

Since there are twice as many GREEN objects as RED, it is reasonable to believe that a new case (which hasn't been observed yet) is twice as likely to have membership GREEN rather than RED. In the Bayesian analysis, this belief is known as the prior probability. Prior probabilities are based on previous experience, in this case the percentage of GREEN and RED objects, and often used to predict outcomes before they actually happen.

Thus, we can write:

Since there is a total of 60 objects, 40 of which are GREEN and 20 RED, our prior probabilities for class membership are:

Having formulated our prior probability, we are now ready to classify a new object (WHITE circle). Since the objects are well clustered, it is reasonable to assume that the more GREEN (or RED) objects in the vicinity of X, the more likely that the new cases belong to that particular color. To measure this likelihood, we draw a circle around X which encompasses a number (to be chosen a priori) of points irrespective of their class labels. Then we calculate the number of points in the circle belonging to each class label. From this we calculate the likelihood:

Although the prior probabilities indicate that X may belong to GREEN (given that there are twice as many GREEN compared to RED) the likelihood indicates otherwise; that the class membership of X is RED (given that there are more RED objects in the vicinity of X than GREEN). In the Bayesian analysis, the final classification is produced by combining both sources of information, i.e., the prior and the likelihood, to form a posterior probability using the so-called Bayes' rule (named after Rev. Thomas Bayes 1702-1761).

Finally, we classify X as RED since its class membership achieves the largest posterior probability.

This is where the difficulty of my maths understanding comes in.

p(Cj | x1,x2,x...,xd) is the posterior probability of class membership, i.e., the probability that X belongs to Cj but why write it like this?

I never took math, but my understanding of naive bayes is fine I think just when it comes to these decomposed methods confuses me. Could some one help with visualizing these methods and how to write the math out in an understandable way?

I'm going to run through the whole Naive Bayes process from scratch, since it's not totally clear to me where you're getting hung up.

We want to find the probability that a new example belongs to each class: $P(class|feature_1, feature_2,..., feature_n$). We then compute that probability for each class, and pick the most likely class. The problem is that we usually don't have those probabilities. However, Bayes' Theorem lets us rewrite that equation in a more tractable form.

The prior probabilities, $P(class)$, can be calculated as you described in your question.

That leaves $P(features|class)$. We want to eliminate the massive, and probably very sparse, joint probability $P(feature_1, feature_2, ..., feature_n|class)$. If each feature is independent , then $$P(feature_1, feature_2, ..., feature_n|class) = \prod_i{P(feature_i|class})$$ Even if they're not actually independent, we can assume they are (that's the "naive" part of naive Bayes). I personally think it's easier to think this through for discrete (i.e., categorical) variables, so let's use a slightly different version of your example. Here, I've divided each feature dimension into two categorical variables. 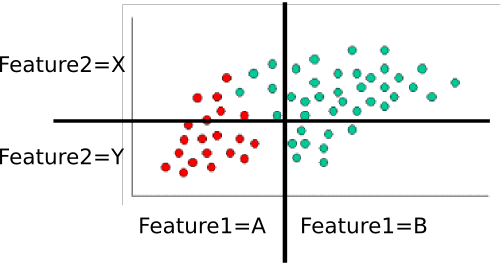 To train the classifer, we count up various subsets of points and use them to compute the prior and conditional probabilities.

Next, we have to compute the conditional probabilities of each feature-value given a class. Here, there are two features: $feature_1$ and $feature_2$, each of which takes one of two values (A or B for one, X or Y for the other). We therefore need to know the following:

Let's classify the white point from your example. It's in the "A" region for $feature_1$ and the "Y" region for $feature_2$. We want to find the probability that it's in each class. Let's start with red. Using the formula above, we know that: $$P(class=red|example) \propto P(class=red) \cdot P(feature_1=A|class=red) \cdot P(feature_2=Y|class=red)$$ Subbing in the probabilities from the table, we get

Subbing in those values gets us 0 ($2/3 \cdot 0 \cdot 2/10$). Finally, we look to see which class gave us the highest probability. In this case, it's clearly the red class, so that's where we assign the point.

In your original example, the features are continuous. In that case, you need to find some way of assigning P(feature=value|class) for each class. You might consider fitting then to a known probability distribution (e.g., a Gaussian). During training, you would find the mean and variance for each class along each feature dimension. To classify a point, you'd find $P(feature=value|class)$ by plugging in the appropriate mean and variance for each class. Other distributions might be more appropriate, depending on the particulars of your data, but a Gaussian would be a decent starting point.

I'm not too familiar with the DARPA data set, but you'd do essentially the same thing. You'll probably end up computing something like P(attack=TRUE|service=finger), P(attack=false|service=finger), P(attack=TRUE|service=ftp), etc. and then combine them in the same way as the example. As a side note, part of the trick here is to come up with good features. Source IP , for example, is probably going to be hopelessly sparse--you'll probably only have one or two examples for a given IP. You might do much better if you geolocated the IP and use "Source_in_same_building_as_dest (true/false)" or something as a feature instead.

I hope that helps more. If anything needs clarification, I'd be happy to try again!

The main assumption behind the naive bayes model is that each feature (x_i) is conditionally independent of all other features given the class. This assumption is what allows us to write the likelihood as a simple product (as you have shown).

This is also what helps the naive bayes model generalize well in practice. Consider the training phase: if we did not make this assumption, then learning would involve estimating a complicated, high dimensional distribution: p(x1, x2, ..., xn, c) in which all of the features are jointly distributed. Instead, we can train by estimating p(x1, c), p(x2, c), ..., p(xn, c), since by knowing the value c makes the values of all the other features irrelevant (they provide no additional information about x_i).

I don't know a good way to visualize this (besides the standard graphical model notation), but to make it more concrete you can write some code to learn a Naive bayes model (you can grab some example data here). Train and test. Now drop the conditional independence assumption and modify the code. Train, test, and compare to the previous model.

Not the answer you're looking for? Browse other questions tagged machine-learning naive-bayes or ask your own question.

3
Length normalization in a naive Bayes classifier for documents
45
Difference between naive Bayes & multinomial naive Bayes
8
Decision threshold for a 3-class Naive Bayes ROC curve
7
When is a Naive Bayes Model not Bayesian?
0
Text classification for classes whose probabilities do not add to 1
3
Naive Bayes likelihood
0
Naive Bayes - calculation error?
0
How can Naive Bayes overfit the data?