I realise this topic has come up a number of times before e.g. here, but I'm still unsure how best to interpret my regression output.

I have a very simple dataset, consisting of a column of x values and a column of y values, split into two groups according to location (loc). The points look like this 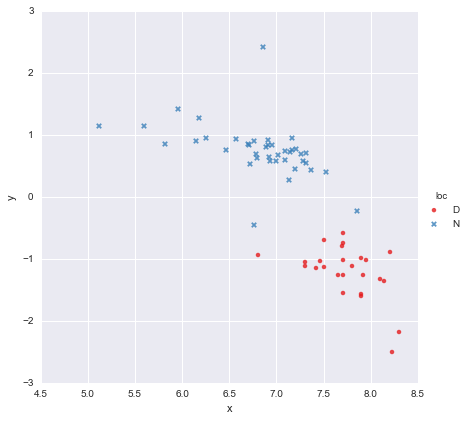 A colleague has hypothesised that we should fit separate simple linear regressions to each group, which I have done using y ~ x * C(loc). The output is shown below. 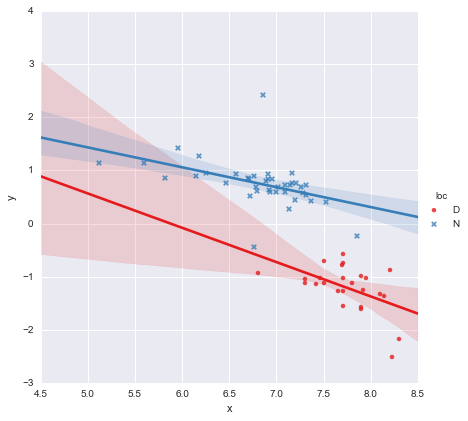 Looking at the p-values for the coefficients, the dummy variable for location and the interaction term are not significantly different from zero, in which case my regression model essentially reduces to just the red line on the plot above. To me, this suggests that fitting separate lines to the two groups might be a mistake, and a better model might be a single regression line for the whole dataset, as shown below. 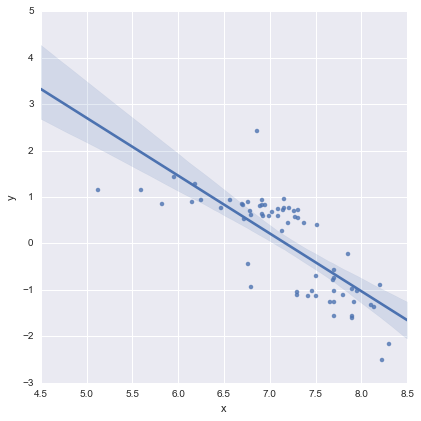 This looks OK to me visually, and the p-values for all the coefficients are now significant. However, the AIC for the second model is much higher than for the first.

I realise that model selection is about more than just p-values or just the AIC, but I'm not sure what to make of this. Can anyone offer any practical advice regarding interpreting this output and choosing an appropriate model, please?

To my eye, the single regression line looks OK (though I realise none of them are especially good), but it seems as though there is at least some justification for fitting separate models(?).

Edited in response to comments

As I understand it, this is essentially just shorthand for a model like this

where $l$ is a binary "dummy" variable representing location. In practice this is essentially just two linear models, isn't it? When $loc=D$, $l=0$ and the model reduces to

which is the red line on the plot above. When $loc=N$, $l=1$ and the model becomes

which is the blue line on the plot above. The AIC for this model is reported automatically in the statsmodels summary. For the one line model I simply used

I think this is OK?

I don't think the single line model is obviously better, but I do worry about how poorly constrained the regression line for $loc=D$ is. The two locations (D and N) are very far apart in space, and I wouldn't be at all surprised if gathering additional data from somewhere in the middle produced points plotting roughly between the red and blue clusters I already have. I don't have any data yet to back this up, but I don't think the single line model looks too terrible and I like to keep things as simple as possible :-)

Just for completeness, here are the residual plots as suggested by @whuber. The two-line model does indeed look much better from this point of view. 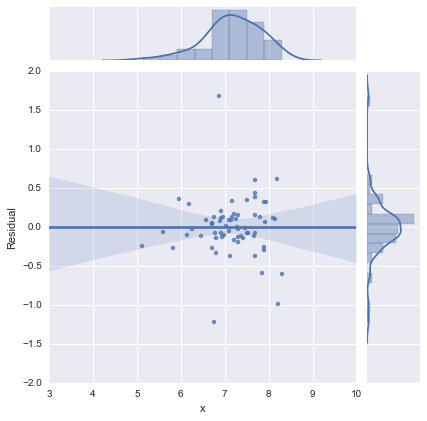 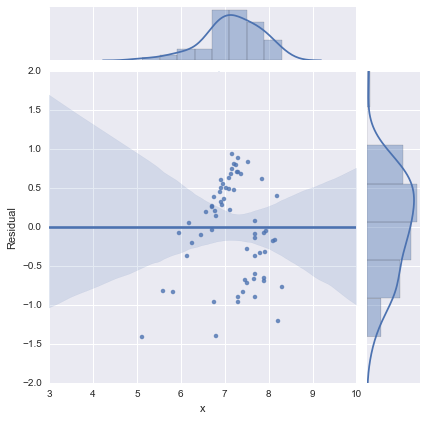 Did you try using both predictors without the interaction? So it would be:

The AIC might be better in the first model because location is important. But the interaction is not important, which is why the P-values are not significant. You would then interpret it as the effect of x after controlling for Loc.

I think you did well to challenge the notion that p-values and AIC values alone can determine the viability of a model. I'm also glad you chose to share it here.

As you've demonstrated, there are various trade-offs being made as you consider various terms and possibly their interaction. So one question to have in mind is the purpose of the model. If you're commissioned to determine the effect of location on y, then you should keep location in the model regardless of how weak the p-value is. A null result is itself significant information in that case.

At first glance, it seems clear the D location implies a larger y. But there is only a narrow range of x for which you have both D and N values for location. Regenerating your model coefficients for this small interval will likely yield a much larger standard error.

But maybe you don't care about location beyond its capacity for predicting y. It was data you just happened to have and color coding it on your plot revealed an interesting pattern. In this case you may be more interested in the predictability of the model than the interpretability of your favorite coefficient. I suspect AIC values are more useful in this case. I'm not familiar with AIC yet; but I suspect it may be penalizing the mixed term because there is only a small range in which you can change location for fixed x. There is very little that location explains that x doesn't already explain.

You must report both groups separately (or perhaps consider multi-level modelling). To simply combine the groups violates one of the basic assumptions of regression (and most other inferential statistical techiques), independence of observations. Or to put it another way, the grouping variable (location) is a hidden variable unless it is taken into account in your analysis.

In an extreme case, ignoring a grouping variable can lead to Simpson's paradox. In this paradox, you can have two groups in both of which there is a positive correlation, but if you combine them you have a (false, incorrect) negative correlation. (Or vice versa, of course.) See http://www.theregister.co.uk/2014/05/28/theorums_3_simpson/.

Not the answer you're looking for? Browse other questions tagged regression p-value least-squares aic or ask your own question.

24
AIC or p-value: which one to choose for model selection?

0
Interpreting Cox & Binomial Regression: non-significant Chi-Square values w/ significant wald statistics
3
Heteroskedasticity and autocorrelation in simple linear regression?
1
Linear regression results: How to interpret the plot?
6
Errors and residuals in linear regression
0
Why can't I calculate the $R^2$ in some regression models if I use the method of maximum likelihood estimation?
3
Anova and Tukey HSD vs Linear Regression
2
AIC for logistic regression