Are any pairs of these four structural models nested in another? 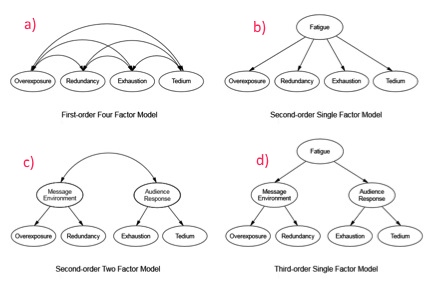 I have taken the liberty of editing the figure to add labels a)-d) and re-uploading it within the question.

Three definitions of nesting, in SEM are:

You are correct that model b) is nested in model c). The one-factor model is a restricted version of the two-factor model. To see this, consider what happens if we fix the correlation between the two factors in model c) to 1. In this case the 2 factors will be identical which is the same as replacing them both with a single factor.

By similar reasoning, we can also see that d) is nested in c) if we fixed both paths from Fatique in model d) to 1.

c) and d) are equivalent models. d) isn't identified without a constraint on the loadings, so there is only one parameter to estimate.

All that we are left with is the relationship between b), and c)/d). These are nested, but not (quite) in the usual way. Constraing the correlation to 1 in model b) gives you nested models, but you can't test these nested models using the chi-square test, because the parameter is on the boundary of the permitted space. In a sense it's a one-tailed test - when you relax the correlation in model c) we know that the parameter will change, but it must get smaller, not larger. The nested model chi-square test assumes that the parameter can change in any direction. It's surprisingly tricky. Here's a paper: http://psycnet.apa.org/?&fa=main.doiLanding&doi=10.1037/1082-989X.13.2.150

Not the answer you're looking for? Browse other questions tagged structural-equation-modeling confirmatory-factor nested-models or ask your own question.

4
What is causing degrees of freedom and negative variance issues when estimating CFA with uncorrelated factors?
5
Linear regression - are my models nested or non-nested?
5
Is structural equation modeling (SEM) just another name of confirmatory factor analysis (CFA)?
1
Are these glm models nested?
4
Feasible to do hierarchical CFA with only two first-order factors?
13
What is the relationship between ANOVA to compare means of several groups and ANOVA to compare nested models?
2
Nested GLM Models