Why would one ever use z-score over a t-score?

Forgive me if this seems like an elementary question, but no amount of googling has turned up a satisfying answer for me. From what I understand, a t-score should be used instead of a z-score when the sample size is considered small. I've also read that a t-score should be used when one is using the estimated variance, $s^2$, as opposed to the known population variance, $\sigma^2$. In addition, I've read that it is fine to use a t-score when $n$ is large and $\sigma^2$ is unknown, such as @gung's states here: Choosing between $z$-test and $t$-test. The reason being that the t-distribution closely approximates the normal distribution when the degrees of freedom are large, and therefore switching from a t-score to a z-score will likely make little difference. And then, finally, if $n$ is large, and $\sigma^2$ is known, it seems the consensus is to use a z-score, meaning you essentially end up with a flow chart like this: 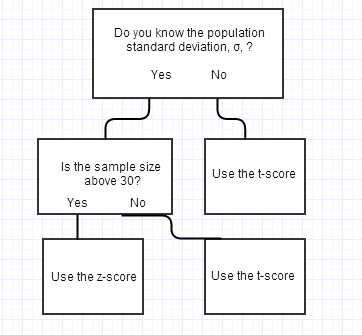 My question is, why would one use a z-score in the case where the sample size is large and $\sigma^2$ is known? If a t-score is to be used when $\sigma^2$ is known and $n$ is small, and the t-distribution closely approximates the z-distribution as $n$ becomes large, then wouldn't the choice between a z-score and a t-score make little difference? And if that is the case, why would anyone every use a z-score over a t-score? Is there some advantage to using a z-score I am missing, or perhaps a flaw in my understanding?

0
Under what conditions should I use an approximate Z-score vs a t-test?
22
Choosing between $z$-test and $t$-test