Interpreting the direction of an interaction effect in Binary Logistic Regression

I have reviewed prior posts in the forum and can't seem to find an answer to a problem I am having with interpreting an interaction:

The goal: interpret the direction of the interaction term.

Variables: I have two continuous predictors (heart rate [HR] and pupil dilatation [PD]), predicting a dichotomous outcome (diagnosis of conduct disorder - no=0, yes=1) I am controlling for age and gender.

Results: The interaction between HR and PD is significant, the beta is positive (suggesting a positive interaction - as HR increases so does PD). And my odds ratio is above 1 (3.1) so I interpret the odds ratio as meaning an increase in both HR and PD elevates the likelihood of being diagnosed with conduct disorder.

My closing thoughts are that the odds ratio may help explain this but I am not entirely sure if this is accurate.

I am open to suggestions, and would love to have some feedback on how to interpret this interaction term in regards to the direction of effect. 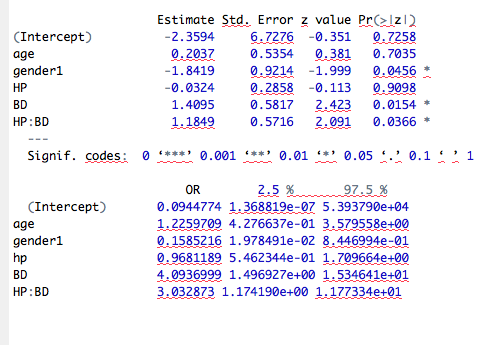 Many thanks in advance

To interpret an interaction, it's often less helpful to look at the coefficients themselves than to look at the effect of interaction in combination with the associated main effects. For example, we can plot the effects of HP, BD, and HP × BD like this (change HP and BP values as appropriate for your actual data): 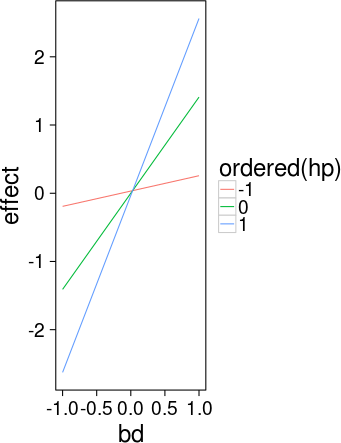 We see that as HP increases, the effect of BD on the DV also increases.

I have just come across Jeremy Dawson's plot templates to help interpret interaction effects in a binary logistic regression (and other methods). I figured I'd post it here for those who do not use r.

Not the answer you're looking for? Browse other questions tagged regression logistic interaction or ask your own question.