My problem is how to find the best decreasing 3rd degree polynomial regression in R. I have data, lets say

Here I want to find best polynomial fitting these points, with a constraint, that polynomial must be in whole interval decreasing (here the is interval from 0 to 1). When I use simple lm

the polynomial is not strictly decreasing.

This polynomial is decreasing when

From here I can find the constraints, that are

Is there any way how to input these constraints into lm ?

PS: I found this link with similar question, but my problem is little more complex. Hope somebody can help!

EDIT: I tested the current answer on this new data set and it doesn't work, why?

First of all, let's write the unconstrained model so that the coefficients are consistently ordered (in this case, from lowest to highest degree):

In your case the data are decreasing, which is good. But you also have 4 data points where the ordinate is nearly constant (with respect to the range of y, $I_y =[\min(y),\max(y)]$), even if the corresponding variation in x is considerable, with respect to $I_x = [\min(x),\max(x)]$.In other words, you have a large plateau in the center of your sample: 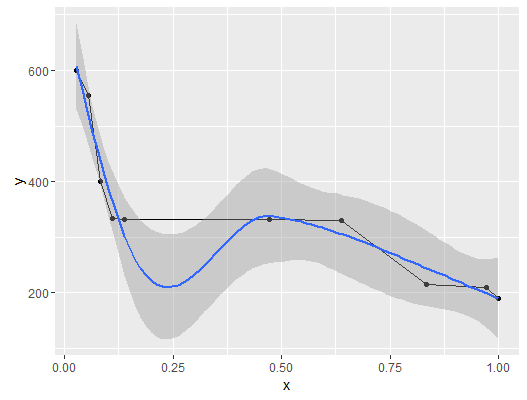 This is not a pattern which can be easily fit by a monotone decreasing third degree polynomial.

Having said that, let's solve the constrained regression problem. First of all let's get explicit equations for the constraints in terms of of the model coefficients. You already noted that the third degree polynomial is decreasing in $I=[0,1]$ if and only if

Note that $d$ doesn't appear in this inequality, and the reason is obvious -whether our model (the third degree polynomial) is increasing or not, doesn't depend on the value of the intercept. Since $3ax^2+2bx+c$ must be negative in 0, we get one of the constraints as $c<0$. Now, to get the other constraint inequalities, we just need to make the substitutions

We are then led to the simpler problem of imposing a negativity constraint on a linear (degree one) polynomial in two variables:

Great, now let's get predictions for both models. lm objects have a predict method, but no equivalent method is available for the results of lsei. Thus we'll use a different approach and define a my_predict function 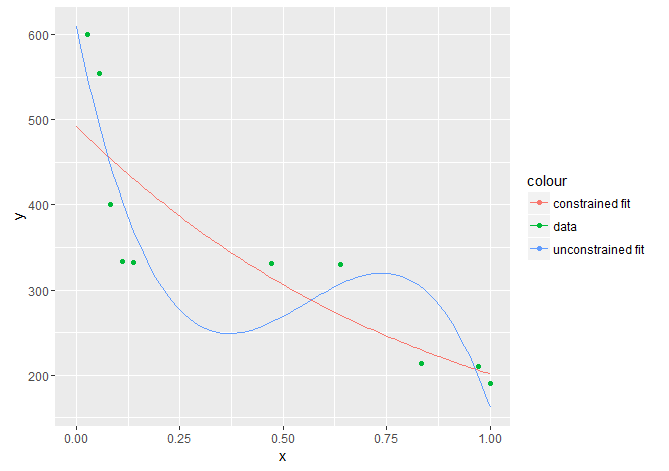 As expected, the constrained fit is considerably worse than the unconstrained one. We can also compute the $R^2$, and get the same picture:

Concerning the new set of data:

Repeating exactly the same calculations leads to a constrained model having the highest degree term equal to zero:

which, given the accuracy of the computations involved, is basically 0. The fact that $x=1$ is a minimum is also evident from the plot: 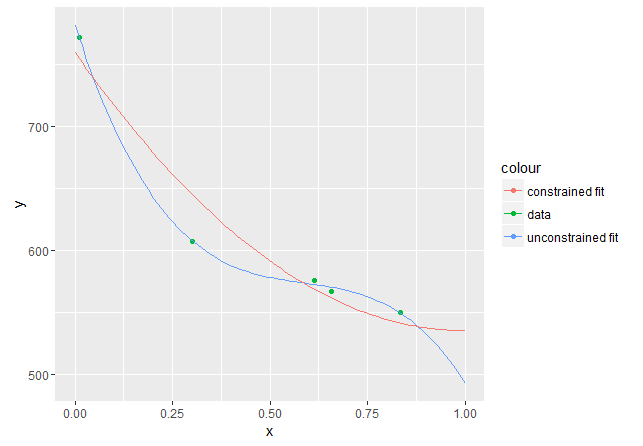 Not the answer you're looking for? Browse other questions tagged r regression polynomial constrained-regression or ask your own question.