Probability of winning a tournament

As I promised I've edited this question. The previous version was written with the intention of simplifying the real question, but it ended in losing the real significance. Now I'm posting the "whole story". ;)

My purpose is to calculate $n$ players' equity in a poker tournament (their probability of ending the tournament) in every $j$ place (1st, 2nd, and so on).

I've previously solved this problem in 2 different ways you can find here:

And for the code:

So, when I know every players' number of chips, I can easily apply those formulas and get their equity.

There are 2 problems involved that hopefully can be solved with a statistical method. (I'm not a mathematician so I'm not sure it will be feasible).

Optimistically these 2 problems can both be solved with some kind of approximations.

In particular the formulas mentioned above should be applicable to scenarios with 27,45,90 players who are distributed in tables of 9.

For example in the case of 27 players there would be 3 tables: when there are 18 players left they will be redistributed in 2 tables and when there are only 9 left the final table will be opened. It's not important to take into account the players' skill since it's a high variance game where its influence is reduced to the minimum, and mostly there are coin flips that eliminate players.

So I'm in a situation where I know:

As I suggested in the previous question, this seems to me (from my humbles math skills) to be a gaussian curve, with a maximum, a minimum and an average number of chips.

I think that's all. If you need additional details please leave a comment, and I will add them as soon as possible. I wanna thank you for your interest, and for all the previous comments and answers. I hope your statistics can help me solve this. :D

I'd like to calculate or approximate the probability that I have to win a tournament where every player has a determined amount of chips.

Let's consider a scenario where there are 9 players and I know everyone's number of chips, to calculate my probability of winning I would do: my chips/(tot chips - my chips).

Now imagine those 9 players are put on 3 different tables of 3 players each, and I know the chips only of the 2 players of my table and mine obviously. I also know the total number of chips, the max and min amount chips the players have and the average stack.

Is it possible to make an approximation of my probability of winning?

I have only basic math skills but I think players' stack could be approximated to a gaussian curve, then use some "statistical trick" to calculate my probability.

Thanks in advance for any hint!

probability normal-distribution games
Share
Improve this question
edited May 23, 2017 at 12:39

The model described in the links is not the diffusion model. The model you are trying to implement is called the Independent Chip Model or ICM. They give different estimates for your expected share of second and lower place prizes. Here are two ways to describe the ICM:

(2) Randomly remove the chips one at a time so that each remaining chip has the same chance to be removed next. When your last chip is removed, you are eliminated.

It's not obvious that these are the same model. In fact, it's clear that the first description only depends on the proportion of chips, and doesn't require that the number of chips is an integer. It's not obvious that the second method gives the same chance to place second if the stacks are $(100,200,300)$ as for $(1,2,3)$. (In other models, these situations are different.) However, you can see that these are equivalent (when both are defined) by a third description:

(3) Each player marks all of his chips. Then they are shuffled and ordered. Players are ranked by their highest chips.

You can find a lot of information about the Independent Chip Model on the web because it is used by serious tournament poker players, particularly those who play Sit-N-Go (SNG)/Single Table Tournaments (STTs). See, for example, this Nash Equilibrium Calculator for push/fold decisions in STTs which uses the ICM. There are other models like the diffusion model, but the Independent Chip Model seems good enough and is easier to compute. You can find a section on the ICM in my book, The Math of Hold'em, and I have also made videos on it for poker instructional sites.

One of the other answers asks why bother since it's all luck. Understanding equities assuming that you have no skill advantage (but the stacks are not equal) is how many serious poker players GET an advantage. Getting all-in with a $60\%$ chance to win and negligible dead money is sometimes great, and sometimes terrible. The equities say which. Also, if you run a poker server, you need to be prepared to divide the prize money fairly in case the server crashes during the tournament. A poker server asked me for help with this.

As you have noted, a naive implementation which computes your chance to place $p$ out of $n$ players sums over many terms, $(n-1) \times (n-2) \times ... \times (n-p) = \frac{(n-1)!}{(n-p-1)!}$. This may be too large in practice. One improvement I use in my program ICM Explorer is to memoize the probabilities with each subset of up to $p-1$ opponents removed. If you are computing each probability, this takes $n 2^{n-1}$ steps instead of $(n-1)!$, which makes the difference between whether you can calculate the case $n=10$ crisply, and whether you can calculate the case $n=20$ in under a second versus not at all.

If you have repeated stack sizes among your opponents, you can remember how many of them have been eliminated instead of which subset. This is particularly useful when you are analyzing multitable tournaments where you only see the stacks at your table, or only a few front-runners, and you assume everyone else you don't see has the same stack size. This makes calculating your equity feasible for large tournaments. This method has a complexity roughly equal to $k \prod_{i=1}^k (m_i+1)$ where there are $k$ different stack sizes among your opponents whose multiplicities are $m_1, ... ,m_k$.

There is one implementation I know about which lets the user calculate ICM equities for multitable tournaments. This uses a simulation. The author assured me that it converges rapidly to within a $0.1\%$ chance for each place. In case you need more accuracy, one simple variance reduction method works very well: Estimate your luck from being chosen or not to finish next at each step by the exact calculations with fewer distinct stack sizes. Subtract this estimate of luck (a vector) from the vector of probabilities obtained in the simulation.

If one of the players with $500$ wins, your remaining opponents will average $1000$, so you estimate your chances using the ICM exactly assuming $2$ opponents with $1000$ chips. Since all stacks would be equal, by symmetry all $3$ players would have an equal chance to finish second, third, and fourth, so your place distribution would be $(0,1/3,1/3,1/3)$.

The weighted average is

The luck estimate averages to $(0,0,0,0)$ and greatly reduces the number of trials needed to achieve a given level of accuracy, particularly for the places closer to first, which are most important for estimating your fair share of the prize money.

Do players keep playing until they run out of chips? Suppose we assume players A B C each have some number of chips and keep playing until they have 0. Suppose we further assume odds of winning a hand are either 1/3, 1/3, 1/3 or some other value (per Michelle's comment about skill). Suppose we further assume each pot consists of either win (+2) or loss (-1) -- an unrealistic but simplifying assumption. Then doesn't this become a question of the relative probability of hitting 0 first? There's literature I'm not really familiar with that deals with this (Martingale wagers, but without the increasing bets). With multiple tables, equal chip pools per table and 1 winner per table 2nd round would be p=1/3.

More: I did some quick simulations along these lines. Each player is equally skilled. A always starts with 50% of the chips, B 1/3 of the chips and C 1/6 of the chips. I just varied the total number of chips. I did 3 runs at 3 levels, each consisting of 2000 simulations until only 1 player was left (18,000 simulations total). This suggests that it might indeed be as simple as p(I win) = my proportion of chips. 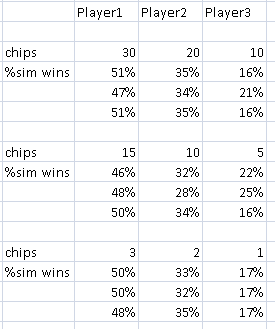 I suspect you are making this more complex than it needs to be. If there are 27 million players (or even 27 thousand - I think you have a typo) and the game is pure chance and we can reasonably assume that no player has a significant number of chips compared to the total number of chips...

Then your chance of winning is: $\frac{my chips} {total chips}$

Your change of coming second, given you didn't win, is: $\frac{mychips}{totalchips-winnerchips}$ which is effectively the same as your chance of winning. And so on.

Given the vast numbers involved and if as you say it is all chance I doubt it is worthwhile doing any more sophisticated calculation. The secret of "statistical tricks" is to know when to use an approximation :-)

Not the answer you're looking for? Browse other questions tagged probability normal-distribution games or ask your own question.

14
How can I predict the odds that a dodgeball team is going to win based on the winning history of its players?
5
Winning Poker criteria in PLO against a player who always raises
2
Calculate advantage of Serves in Table Tennis
1
Probability of winning multi participant events
4
Probability of winning a game for toddlers