Pointwise multiplication of two Gaussians and normalization in Python

The Bayesian update contains a multiplication of the Prior and the Likelihood. The area under the bell curve of a gaussian sums up to 1. We know that this only holds if we integrate from -Inf to +Inf.

This is not feasible on a computer, so I tried to somehow approximate the normalization step after a multiplication of two gaussians.

First, I create one gaussian using the quasi-continuous space between -50.0 and +50.0:

When I'd do a Riemann-like integration, like multiplying each x distance with the y value, then it will some up to appx. one:

When I plot these two curves, I see the desired and well-known picture: 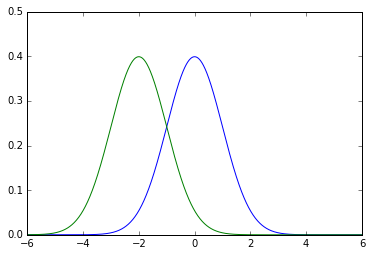 So, now let's assume that I multiply these two gaussians:

When I would add this y3 to the plot, of course the values would be too small as the y3 are not normalized yet - but, I also cannot normalize the values to sum up to 1 - as seen above, my original PDF-values of y1 and y2 have either summed up to 99.99 due to the sampling. So, I do an approximation:

which is kind of a scaled normalization. When I now plot the y3 along with the other two gaussians, I get an image that does not look to be totally wrong: 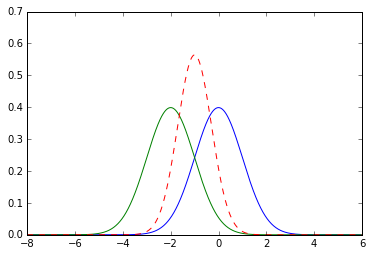 Now, my questions are:

Browse other questions tagged python normal-distribution or ask your own question.