Such thing as a weighted correlation?

I have some interesting data on the most popular musical artists streamed divided by location into about 200 congressional districts. I want to see if it's possible to poll a person on his or her musical preferences and determine whether he or she "listens like a Democrat" or "listens like a Republican." (Naturally this is light hearted, but there's real entropy in the data!)

I have data on about 100 artists, plus the average percentage votes for Republicans and Democrats in each district over the past three election cycles. So I ran a correlation on each artist to see which ones were most disproportionately listened-to as a function of vote share for Democrats. Those correlations run from about -0.3 to 0.3 for any given artist, with plenty in the middle that have little or no predictive power.

Second, I'm curious how to combine these correlations into a composite guess as to the user's politics. Let's say I take the 20 artists with the highest absolute correlative values (positive and negative), ten in each direction, and poll a user on how much he or she likes each artist. So I have up or down votes on each artist plus the correlation to the politics for all 20 values. Is there a standard way to combine these correlations into a single estimate? (I'm thinking something like the NYTimes' famous dialect quiz, where it combined the regional probabilities for 25 questions into a heat map. But in this case, I just need a single value on how Democratic or Republican one's taste in music is.

Formula for weighted Pearson correlation can be easily found on the web, StackOverflow, and Wikipedia and is implemented in several R packages e.g. psych, or weights and in Python's statsmodels package. It is calculated like regular correlation but with using weighted means,

having all this you can easily compute weighted correlation

As about your second question, as I understand it, you would have data about correlations between political orientation and preference for the twenty artists and users binary answers about his/her preference and you want to get some kind of aggregate measure of it.

Basically taking tangents of correlation coefficients "flattens" the extreme values (see below) so they have lower influence on the final estimate and makes their distribution closer to normal. This procedure was also described by Bushman and Wang (1995) and Corey, Dunlap and Burke (1998). 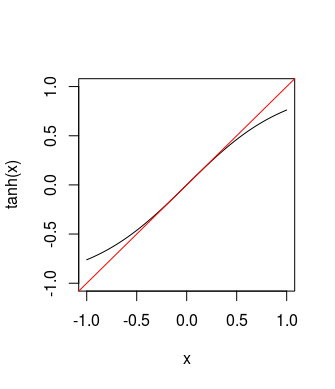 i.e. compute average correlation that inverts the signs for correlations accordingly for preferred and disliked artists. By applying such procedure you end up with the average "correlation" of users preference and political orientation, that as regular correlation ranges from $-1$ to $1$.

Don't you think that all of this is an overkill for something that is basically a multiple regression problem? Instead all the weighting and averaging you could simply use weighted multiple regression (linear or logistic depending if you predict binary preference or degree off preference in either direction) where weights are based on sizes of subsamples. You would use musical preference for each artist as predictor. In the end you'll use user's preference to make predictions. This approach is simpler and more statistically elegant. It also applies relative weights to the artists while averaging the correlations doesn't correct for their relative "impact" on the final score. Moreover, regression takes into consideration the base rate (or default political orientation), while averaging correlations does not. Imagine that vast majority of the population prefers party $A$, this should make you less eager to predict $B$'s and regression accounts for that by including intercept. The only problem is multicollinearity but when averaging correlations you ignore it rather then dealing with it.

Not the answer you're looking for? Browse other questions tagged correlation prediction pooling weighted-data or ask your own question.