Why is the arithmetic mean smaller than the distribution mean in a log-normal distribution?

So, I have a random process generating log-normally distributed random variables $X$. Here is the corresponding probability density function:

There are two different ways to estimate that mean (at least, that's what I understood: I could be wrong):

The problem is that the distributions corresponding to each these estimates are systematically different:

The "plain" mean (represented as the red dashed line) provides generally lower values than the one derived from the exponential form (green plain line). Though both means are calculated on the exact same dataset. Please note that this difference is systematic.

Why aren't these distributions equal?

The two estimators you are comparing are the method of moments estimator (1.) and the MLE (2.), see here. Both are consistent (so for large $N$, they are in a certain sense likely to be close to the true value $\exp[\mu+1/2\sigma^2]$).

The MLE is, however, not unbiased.

In fact, Jensen's inequality tells us that, for $N$ small, the MLE is to be expected to be biased upwards (see also the simulation below): $\hat\mu$ and $\hat\sigma^2$ are (in the latter case, almost, but with a negligible bias for $N=100$, as the unbiased estimator divides by $N-1$) well known to be unbiased estimators of the parameters of a normal distribution $\mu$ and $\sigma^2$ (I use hats to indicate estimators).

Try increasing $N=100$ to a larger number, which should center both distributions around the true value. 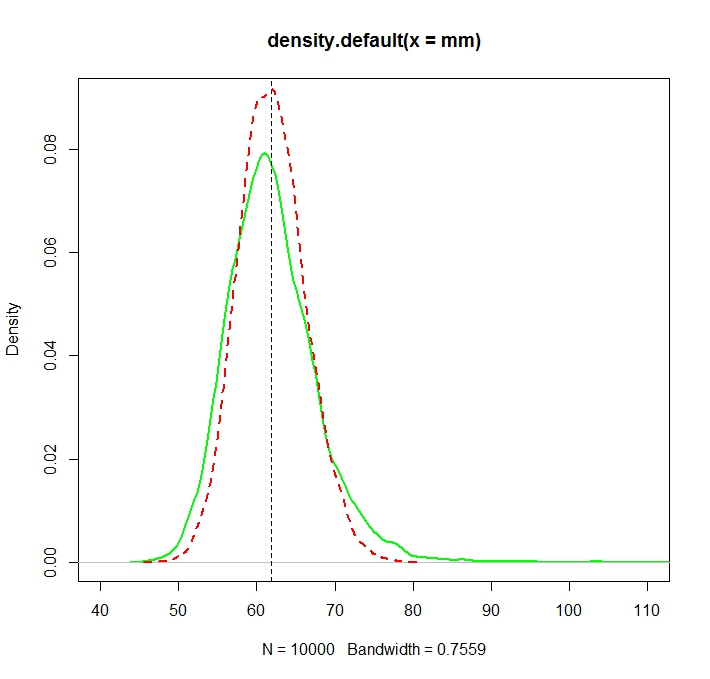 We note that while both distributions are now (more or less) centered around the true value $\exp(\mu+\sigma^2/2)$, the MLE, as is often the case, is more efficient. 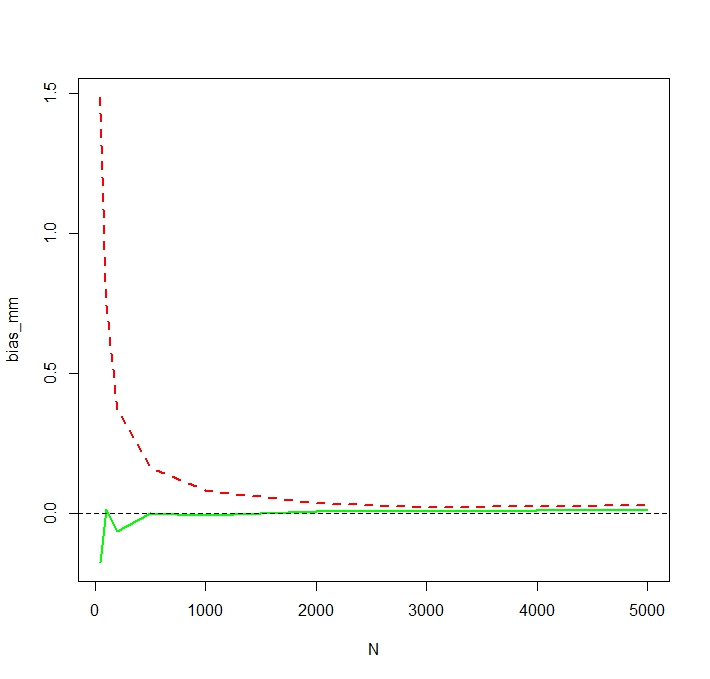 We see that the MLE is indeed seriously biased for small $N$. I am a little surprised about the somewhat erratic behavior of the bias of the MM estimator as a function of $N$. The simulated bias for small $N=50$ for MM is likely caused by outliers that affect the non-logged MM estimator more heavily than the MLE. In one simulation run, the largest estimates turned out to be

Not the answer you're looking for? Browse other questions tagged estimation bias fitting lognormal-distribution moments or ask your own question.