How to read Cook's distance plots?

Does anyone know how to work out whether points 7, 16 and 29 are influential points or not? I read somewhere that because Cook's distance is lower than 1, they are not. Am, I right? 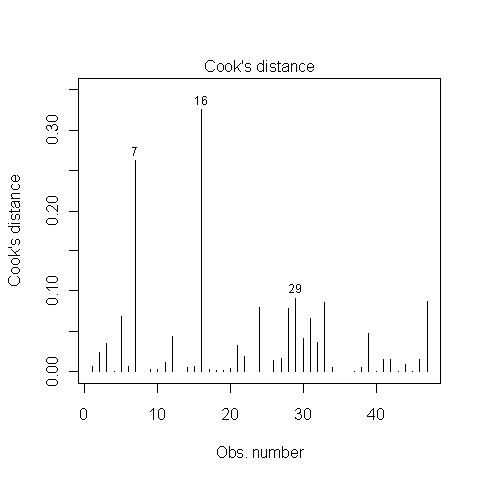 Some texts tell you that points for which Cook's distance is higher than 1 are to be considered as influential. Other texts give you a threshold of $4/N$ or $4/(N - k - 1)$, where $N$ is the number of observations and $k$ the number of explanatory variables. In your case the latter formula should yield a threshold around 0.1 .

John Fox (1), in his booklet on regression diagnostics is rather cautious when it comes to giving numerical thresholds. He advises the use of graphics and to examine in closer details the points with "values of D that are substantially larger than the rest". According to Fox, thresholds should just be used to enhance graphical displays.

In your case the observations 7 and 16 could be considered as influential. Well, I would at least have a closer look at them. The observation 29 is not substantially different from a couple of other observations.

There is one other point worth making here. In observational research, it is often difficult to sample uniformly across the predictor space, and you might have just a few points in a given area. Such points can diverge from the rest. Having a few, distinct cases can be discomfiting, but merit considerable thought before being relegated outliers. There may legitimately be an interaction amongst the predictors, or the system may shift to behave differently when predictor values become extreme. In addition, they may be able to help you untangle the effects of colinear predictors. Influential points could be a blessing in disguise.

Not the answer you're looking for? Browse other questions tagged r regression residuals diagnostic cooks-distance or ask your own question.