I am studying a treatment that degrades device quality and performed an independent sample test on two batches that had different initial quality. I analyzed the data with a two variable linear regression, the details are in my previous question here: How to combine 2 unpaired t tests that test the same effect

My specific questions in bold at the bottom of the post after this background information.

For easy reference the output of the regression is here:

It is very reasonable to assume that that the initial quality of the device batch could determine the size of the effect of the treatment. For this reason I also tried including a interaction term in the regression. 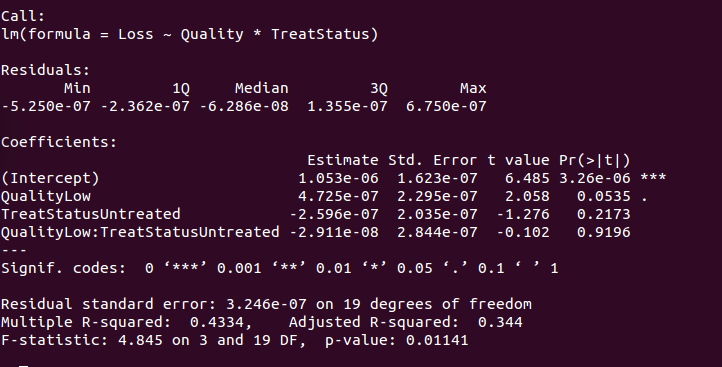 When I am presenting my data I am reporting the model with no interaction term. My justification for this is:

1) Including the interaction term results in a reduced F-statistic for the regression.

a.) The interaction term has a p-value of 0.91, which suggests it adds no value to the model.

1) Have I made a reasonable decision to exclude the interaction term?

2) Are my justifications sufficient or could anything additional be considered / mentioned?

Browse other questions tagged regression correlation interaction f-statistic or ask your own question.