Does no correlation imply no causality?

No. Any controlled system is a counterexample.

Without causal relationships control is clearly impossible, but successful control means - roughly speaking - that some quantity is being maintained constant, which implies it won't be correlated with anything, including whatever things are causing it to be constant.

So in this situation, concluding no causal relationship from lack of correlation would be a mistake.

Let's look at the random variable $x$, and the non random function $f(x)=x^2$, with which we create a random variable $y=f(x)$. The latter is clearly caused by the former variable, not just correlated. Let's draw a scatter plot: 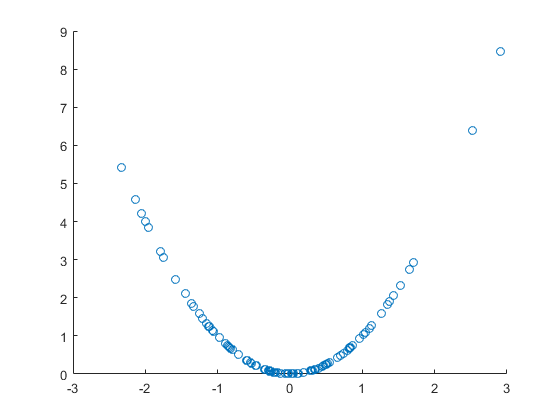 We'd get the same result for any symmetrical distribution, such as uniform $U[-1,1]$.

No. In particular, random variables can be dependent but uncorrelated.

Maybe looking at it from a computational perspective will help.

As a concrete example, take a pseudorandom number generator.

Is there a causal relationship between the seed you set and the $k^\text{th}$ output from the generator?

Is there any measurable correlation?

The better answer to the question is that correlation is a statistical, mathematical, and/or physical relationship while causation is a metaphysical relationship. You can't LOGICALLY get from correlation (or non-correlation) to causation, without a (large) set of assumptions binding the metaphysics to the physics. (One example is that what two people might agree to be "a rational observer" is to a large degree arbitrary and probably ambiguous). If A pays B to do C which results in D, what is D's cause? There's simply no rational reason to choose C or B or A (or any of A's precursor events). Control theory deals with systems in realms where they are under control. One way to get a dependent variable under control is to reduce the response of that variable to the possible range of (controlled) variation of the independent variable to statistical noise. For instance, we know air pressure correlates to health (just try breathing vacuum), but if we control air pressure to 1 +/-0.001 atm, how likely is ANY variation of air pressure to effect health?

Yes, contrary to previous replies. I'm going to take the question as nontechnical, particularly the definition of "correlation". Maybe I'm using it too broadly, but see my second bullet. I hope it will be considered appropriate to discuss other answers here, because they illuminate different portions of the question. I'm drawing on Pearl's approach to causation, and in particular my take on it in some papers with Kevin Korb. Woodward probably has the clearest nontechnical account.

I do not know what @user2088176 had in mind, but I think if we take the question very generally, then the answer is yes. At least I think that's the answer required of the causal discovery literature and the interventionist account of causation. Causes are differences that make a difference. And that difference will be revealed, in some experiment, as persistent association.

152
Does causation imply correlation?
18
Relationships between correlation and causation
5
Does autocorrelation imply temporal dependence?
3
real world examples of causality without correlation
0
Isn't it okay to correlate acceleration with calorie regardless whether acceleration contains gravity or not?
0
What do r (Pearson correlation coefficient) and R^2 stand for?
0
Causality of the regression