Ways to determine if experience or recent practice time is more significant in ranking?

I'm a college paintball coach and I have two populations of players:

I. Players that have a lot of experience/skill prior to joining the team e.g. playing for amateur non college teams but who don't often play together for various reasons.

II. Players that are not very experienced/skilled but who have a lot of recent practice time playing together with other players in this population.

I've also recently read this article by Michael Lewis about Shane Battier. In summary, it recounts how he has very low or non-existent traditional basketball "stats" but he has a very high "plus/minus" wherein whenever he is on the court, he limits the scoring of the other team. This leads me into the questions.

What I have so far:

b. A record of 1 vs 1 encounters that allows me to say things like: Player A has beat Player B 66% of the time in 1 v 1 matches

c. A record of n vs n encounters (with n being up to 5 inclusive)

Each weekly practice gives me additional data to use as well.

My thinking is that after enough 1 v 1 matches each player would have played every other player multiple times. This would allow me to rank everyone at an individual level (e.g. using ELO).

Is there a way to structure the n v n matches in such a way that this becomes easier? e.g. if round robin every possible 3 v 3 combination will this increase the sample size and give me better eventual outcomes?

As a side benefit, as mentioned above, if I could find players that have low individual skills scores and/or low ELO rankings but somehow have a high correlation with wins when playing on n v n matches (with n being greater than 1).

If there is any more detail needed, please let me know.

So we're now a couple weeks in of tracking how each player does in 1v1 and 3v3 match ups. I've created two ELO rankings based on each category (one for 1v1 and one for 3v3). I used the same formula and weight as this page. For the 3v3, I took the average in the same manner that the link does for doubles.

Here is a scatter plot showing the two categories where each point is one player: 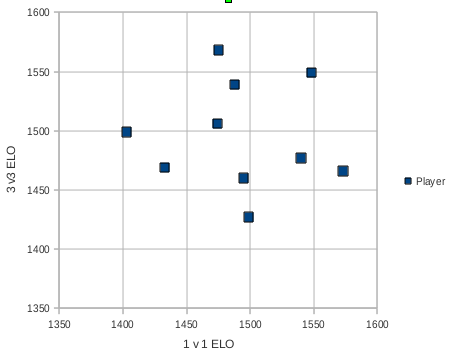 My next question would be thoughts on how best to calculate the 3v3 ELO e.g. is it better to take the average, max, min, average of min and max etc. I'm keeping track of how accurate the ELO is for predicting the winner as well so hopefully the data will answer this question as well.

That sounds like we're stuck, however assuming that the 3v3 mixes the players around a bit, so the players don't have the same team mates for every 3v3, the compositional changes to the 3v3 teams may be masking overall individual performance within teams. The scatterplot could be telling us that, when matched with a lower skilled player, the presence of a higher skilled player on a 3v3 team does not automatically lift team performance (and vice versa).

To answer your second question, when you have enough data to change the rankings from 1500, look at those players who score low on the 1v1 ELO axis and have a higher ranking on the 3v3 ELO axis - this tells you the players with poorer individual skills who make large contributions to teams assuming that the teams are matched overall on terms of mix of skills. For example, if one poorer player keeps being matched with the two top players in a team, then the team result is likely due to the top players with the poorer player having probably little effect, and therefore the team result won't be an accurate reflection of how well the poorer player works in a team generally.

For your first question, experience and skill will be highly correlated simply because practice tends to increase skill, so both factors are unstable over time. Could you further define how you wish to examine recent playing experience? Do you mean:

These are two quite different questions and will require different approaches.

Not the answer you're looking for? Browse other questions tagged probability ranking games or ask your own question.

7
Do variations of ELO system exist for non-mirror games?
7
Winning probability in a game with multiple players
6
Validating correctness of ranking algorithm
4
If C wins B 80% of the time, and B wins A 80% of the time, how often would C beat A?
3
How do you verify a rating system?
3
How can I calculate expected finishing order in a board game?
1
Does the Elo K-factor affect winning probabilities?
1
Statistical test for determining advantage from win ratio in a 4 player game