The Wikipedia article states that $F_\beta$ "measures the effectiveness of retrieval with respect to a user who attaches β times as much importance to recall as precision".

And how to show β times as much importance?

Instead of using weights in the denominator that are equal and sum to 1 ($\frac{1}{2}$ for recall and $\frac{1}{2}$ for precision), we might instead assign weights that still sum to 1 but for which the weight on recall is $\beta$ times as large as the weight on precision ($\frac{\beta}{\beta+1}$ for recall and $\frac{1}{\beta+1}$ for precision). This yields your second definition of the $F_\beta$ score:

Again, if we had used $\beta^2$ instead of $\beta$ here we would have arrived at your first definition, so the differences between the two definitions are just notational.

The particular way of defining the relative importance of the two metrics that leads to the $\beta^{2}$ formulation can be found in Information Retrieval (Van Rijsbergen, 1979):

The motivation for this being:

To see that this leads to the $\beta^{2}$ formulation we can start with the general formula for the weighted harmonic mean of $P$ and $R$ and calculate their partial derivatives with respect to $P$ and $R$. The source cited uses $E$ (for "effectiveness measure"), which is just $1-F$ and the explanation is equivalent whether we consider $E$ or $F$.

Now, setting the derivatives equal to one another places a restriction on the relationship between $\alpha$ and the ratio $P/R$. Given that we wish to attach $\beta$ times as much importance to recall as precision we will consider the ratio $R/P$1:

Defining $\beta$ as this ratio and rearranging for $\alpha$ gives the weightings in terms of $\beta^{2}$:

Which can be rearranged to give the form in your question.

Thus, given the quoted definition, if you wish to attach $\beta$ times as much importance to recall as precision then the $\beta^{2}$ formulation should be used. This interpretation does not hold if one uses $\beta$.

You could define a score as you suggest. In this case, as Vic has shown, the definition for the relative importance you would be assuming is:

To point something out quickly.

It means that as the beta value increases, you value precision more.

If you want to weight the F-β scoring so that it values precision, β should be 0 < β < 1, where β->0 values only precision (the numerator becomes very small, and the only thing in the denominator is recall, so the F-β score decreases as recall increases).

TLDR; Contrary to the literature which all traces back to an arbitrary proposed definition, using a $\beta$ term like OP suggests is actually more intuitive than the $\beta^2$ term.

A Person's answer does well to show why $\beta^{2}$ appears, given Van Rijsbergen's chosen way to define the relative importance of precision and recall. However, there is a consideration that's missing in the literature, which I'm arguing here: the chosen definition is unintuitive and unnatural, and if you actually used $F_\beta$ (in practice) the way it's defined, you would quickly be left thinking, "the effect of $\beta$ seems way more aggressive than the value I've chosen".

To be fair, it is mostly Wikipedia's summary that is misleading, as it neglects to mention the subjective measure of importance involved, whereas Van Rijsbergen merely presented a possible definition that was simple but not necessarily the best or most meaningful one.

Generally speaking, if $R/P > \beta$ then an increase in $P$ is more influential than an increase in $R$, whereas $R$ is more influential than $P$ where $R/P < \beta$. But here's why I would argue that the weighting is unintuitive. When $P = R$, increases in $R$ are $\beta^2$ times as effective as $P$. (This can be calculated from the partial derivatives provided in A Person's answer.) When someone says "I want recall to be weighted 3x more important than precision", I would not jump to the definition that equates to "precision will be penalised until it's literally a third of the value of recall", and I certainly wouldn't expect that when precision and recall are equal, recall contributes 9x as much. That doesn't seem practical in most situations where you ideally want both precision and recall to be high, just one to be a little higher than the other.

Below is a visual representation of what $F_\beta$ looks like. The red lines highlight the ratio $R/P = \beta$ and that the partial derivatives of $F_\beta$ are equal at that ratio, shown by the solid red slopes. 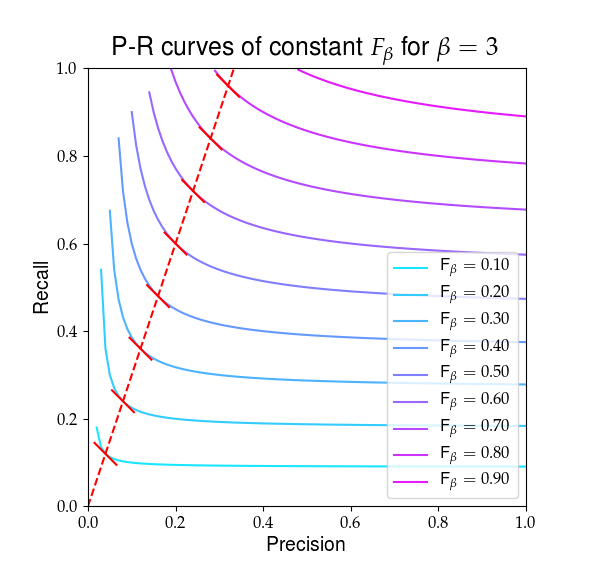 Remembering that $P = R$, this simplifies to:

What does this mean? An informal summary:

The beta value greater than 1 means we want our model to pay more attention to the model Recall as compared to Precision. On the other, a value of less than 1 puts more emphasis on Precision.

Not the answer you're looking for? Browse other questions tagged machine-learning precision-recall model-evaluation or ask your own question.

0
Precision and Recall for highly-imbalanced data

6
Summary statistics of the precision-recall curve
5
Should I use the opposite of an F1 score?
1
How to design and evaluate video recommender system from implicit click feedback?
15
Confidence interval of precision / recall and F1 score
3
What are best practices for choosing the beta for an F-measure score?
1
k-fold cross validation much better than unseen data
2
Classifier can predict time series 1 day in advance, but not more. Why?
6
Why to downweight Precision in nominator of F-beta when I actually want to upweight Precision?