Tuning an exponential moving average to a moving window mean?

Is there some way to tune the alpha parameter such that the smoothing is approximately the same as that of a moving window mean of a given size? (Not looking for identical results, obviously, and offsets are OK). So, say tune alpha such that the resultant time series is as close as possible in shape to the result provided by a 3-month moving window?

edit: context: I'm trying to generate multiple proxy for soil moisture, from rainfall data, which abstractly represent different depths (which I'm assuming are related to long-term rainfall averages). A moving window allows me to calculate e.g total rainfall in the past 3 days, 3 months, or year, which might correspond to top few centimetres of soil, the top meter, and the extended soil column, respectively. However, a moving window requires data from the past, which isn't always available (e.g. at the start of a series). If an exponential average is used instead, then I only need to store one value for each average (the average from the previous time step), and this value can be initialised with the long-term mean.

Let $x$ be the original time series and $x_m$ be the result of smoothing with a simple moving average with some window width. Let $f(x, \alpha)$ be a function that returns a smoothed version of $x$ using smoothing parameter $\alpha$.

Define a loss function $L$ that measures the dissimilarity between the windowed moving average and the exponential moving average. A simple choice would be the squared error:

If you want the error to be invariant to shift/scaling, you could define $L$ to be something like the negative of the peak height of the normalized cross correlation.

Find the value of $\alpha$ that minimizes $L$:

Here's an example using a noisy sinusoidal signal and the mean squared error as the loss function:

Another example using white noise as the signal:

The loss function appears to be well behaved and have a single global minimum for these two different signals, suggesting a standard 1d optimization solver could work (as I used to select $\alpha$ here). But, I haven't verified that this must be the case. If in doubt, plot the loss function and use a more sophisticated optimization method if necessary.

Here's a plot of the optimal alpha (for exponential smoothing) as a function of window size (for simple moving average). Plotted for each of the signals shown above. 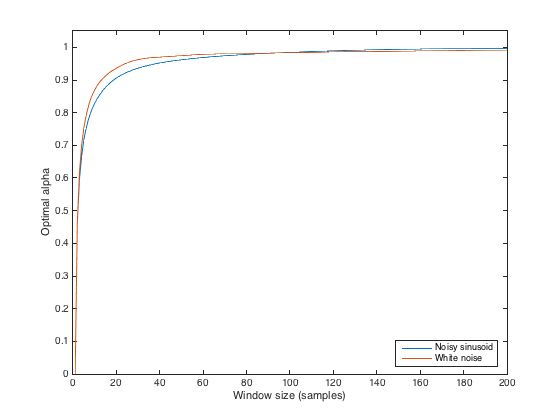 If I understand the question correctly, the issue is one of trying to make an exponentially decreasing weight series fit to a discrete uniform (constant weight with cutoff): 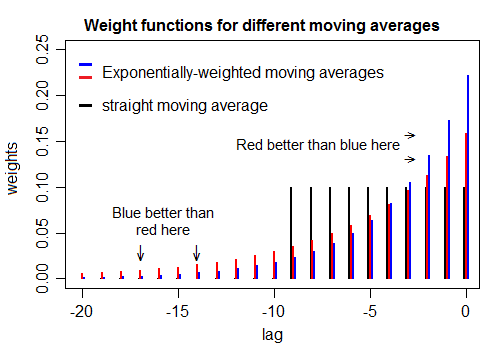 Exactly which choice of $\alpha$ will do best at matching the results from uniform-weights will depend crucially on how you measure performance and (naturally) on the characteristics of the series (both ordinary moving average and EWMA would only be reasonably suitable for weakly-stationary series for example, but that covers a lot of cases with potentially different relative performance for different $\alpha$ values)

We can think of this as a hyperparameter optimization problem.

We have a target X_mean which is the target value.

We are searching for a hyperparameter (alpha) for the exponential moving average to minimize loss.

An exponential moving average ($EMA$) is an IIR filter: Infinite impulse response, meaning that, technically, the "weights" vector of the $EMA$ is of infinite length, because an $EMA$ uses its own output in the previous time step as an input in the current one:

However, you can approximate an $EMA$ with a finite window length $n$, depending on the number of decimals you require: I refer to this thread.

It is known that the $\alpha$ of the $EMA$ is associated with window length $n$ like this:

And the general shape of the $EMA$ weights will look like this (although I would plot them in reverse order, because a window slides over a time series from left to right, if it's a causal filter).

The interesting aspect about this question is that all these different types of moving averages (SMA, EMA, LWMA, HMA, ...) are more or less the same once you express them in function of lag. I refer to this thread.

Not the answer you're looking for? Browse other questions tagged exponential-smoothing moving-average calibration moving-window or ask your own question.

2
What is the lag associated with Moving Average smoothing?