How to define a Rejection Region when there's no UMP?

I've previously asked what criteria should be used to define a Rejection Region(RR), see the answers to this question, and the main one was to choose the RR that made the test as powerful as possible.

In this case, with the alternative being a bilateral composite hypothesis there's usually no UMP test. Also, by the answer given in the book, the authors don't show if they did a study of the power of their RR. Nevertheless, they chose a two-tailed RR. Why is that, since the hypothesis do not 'unilaterally' determine the RR?

Easier to first work through the case where the regression coefficients are known & the null hypothesis therefore simple. Then the sufficient statistic is $T=\sum z^2$, where $z$ is the residual; its distribution under the null is also a chi-squared scaled by $\sigma^2_0$ & with degrees of freedom equal to the sample size $n$.

Next find the ratio of the likelihoods under $\sigma=\hat\sigma$, the maximum-likelihood estimate of $\sigma$, & $\sigma=\sigma_0$:

This is a fine statistic for quantifying how much the data support $H_\mathrm{A}:\sigma \neq \sigma_0$ over $H_0:\sigma = \sigma_0$. And confidence intervals formed from inverting the likelihood-ratio test have the appealing property that all parameter values inside the interval have higher likelihood than those outside. The asymptotic distribution of twice the log-likelihood ratio is well known, but for an exact test, you needn't try to work out its distribution—just use the tail probabilities of the corresponding values of $T$ in each tail.

If you can't have a uniformly most powerful test, you might want one that's most powerful against the alternatives closest to the null. Find the derivative of the log-likelihood function with respect to $\sigma$—the score function:

Evaluating its magnitude at $\sigma_0$ gives a locally most powerful test of $H_0:\sigma=\sigma_0$ vs $H_\mathrm{A}:\sigma \neq \sigma_0$. Because the test statistic's bounded below, with small samples the rejection region may be confined to the upper tail. Again, the asymptotic distribution of the squared score is well known, but you can get an exact test in the same way as for the LRT.

A plot helps show the bias in the equal-tail-areas test & how it arises: 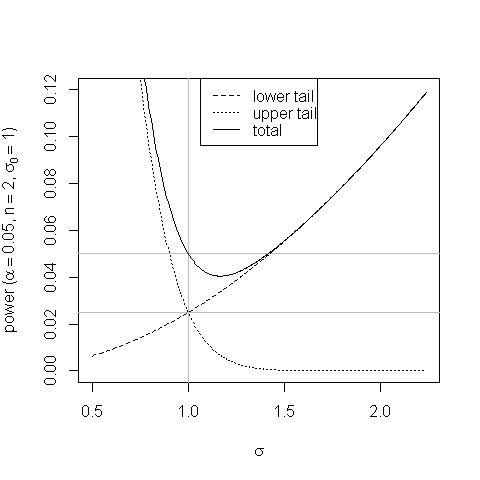 Being unbiased is good; but it's not self-evident that having a power slightly lower than the size over a small region of the parameter space within the alternative is so bad as to rule out a test altogether.

Two of the above two-tailed tests coincide (for this case, not in general):

The LRT is UMP among unbiased tests. In cases where this isn't true the LRT may still be asymptotically unbiased.

With the composite null hypothesis, the arguments become a little more complicated, but I think you can get practically the same results, mutatis mutandis. Note that one but not the other of the one-tailed tests is UMP!

In this case, with the alternative being a bilateral composite hypothesis there's usually no UMP test.

I am not sure if that is true in general. Certainly, a lot of the classical results (Neymon-Pearson, Karlin-Rubin) are based on either simple or one-sided hypothesis, but generalizations to two-sided composite hypothesis do exist. You can find some notes on that here, and more discussion in the textbook here.

For your problem specifically, I don't know whether a UMP test exists or not. But intuitively, it seems to be that under 0-1 loss, a one sided test will probably be inadmissible, and thus the class of admissible test will be all two-sided tests. Give the class of two sided tests, the goal is to find the one with the largest power, which should automatically happen by choosing quantiles around the one mode of the $\chi^2$. (This is all based on intuition).

Not the answer you're looking for? Browse other questions tagged regression hypothesis-testing mathematical-statistics inference or ask your own question.

60
Is chi-squared always a one-sided test?
22
P-value in a two-tail test with asymmetric null distribution
5
Chi-Square-Test: Why is the chi-squared test a one-tailed test?
4
Behavior of the statistical power
3
How to define a rejection region?