Can I use a paired t-test on data that are averages?

Is this still an acceptable use of the paired t test?

It's probably not a problem at all, provided the sample sizes are similar to each other.

There could be complications with small sample sizes, though. Intuitively, an average of a small sample is more variable than averages of large samples. If some pairs are both based on small samples, they could create unusual outlying values. It's well known that the Student $t$ test does not work well in such cases.

If all the sample sizes were the same, say equal to $m$, then every one of the observations would behave as independent Normal random variables with variance $\sigma^2/m$. This is where a paired $t$ test is ideal: the differences $\bar x_A - \bar x_B$ then have Normal distributions with mean $0$ and variance $2\sigma^2/m$ and they are all independent. The Student $t$ statistic--equal to the difference in means of the $\bar x_A$ and the means of the $\bar x_B$, divided by the estimated standard error of those differences, then will have exactly a $t_{n-1}$ distribution, where $n$ is the number of pairs.

To see whether this might be a practical issue, I simulated $10,000$ paired t-tests for $20$ pairs. First I computed the values in each pair as the average of two independent values (equal to $2$). All data were independently drawn from the same Normal distribution. (You may easily vary the code to simulate your particular circumstances.) I collected the t-statistic for each iteration. Here they are, displayed as a histogram. On it is drawn (as a red curve) the Student $t$ distribution with $20-1=19$ degrees of freedom: it is supposed to describe this histogram well, especially in the tails, which correspond to significant results. 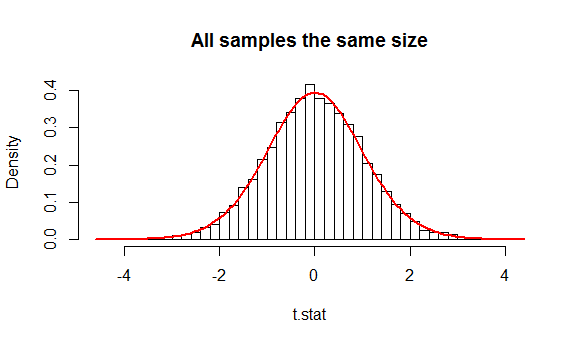 It's a nice agreement between theory and simulation, confirming the appropriateness of the t-test (and, incidentally, showing the code is likely working as intended). 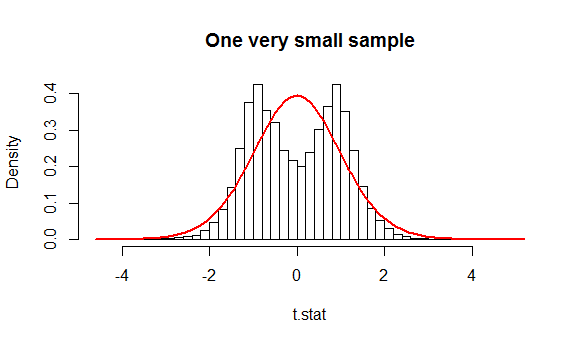 Something went very wrong. The single pair based on a small sample has caused the $t$ statistics to be less extreme than we might otherwise suppose, but rarely near zero. This is due, as previously suggested, to its effect on the estimated standard deviation: the inflated SD pulls in the tails--it's hard to get a large fraction when its denominator is large--but also the deviation of the single pair dominates the numerator. Accordingly, numerator and denominator tend to be comparable (but can have different signs). That's why the histogram bunches up near $\pm 1$.

As a result, the t-test will have a harder time detecting a departure from the null hypothesis: it will be less powerful than we think.

In practice, we can expect there to be a certain amount of this behavior in your data. A deeper analysis of variance estimates and $\chi^2$ distributions indicates it really won't be much of a problem unless there are indeed some pairs with radically smaller sample sizes than others.

Although I haven't fully analyzed any alternatives (the question did not ask for a solution, only for whether a paired t-test would work!), I believe that this analysis could readily be extended to study an obvious weighted version of the t-test, weighting the data by the reciprocals of their sample sizes, and that the weighted version would have superior performance. It could take some effort to figure out the appropriate degrees of freedom to use in general.

This is the R code that created the figures. By suitably changing n.group you can specify the sample sizes in your pairs and re-run it to study the extent to which using a paired t-test might be problematic.

In principle it's fine, but you are not using the full power of your data though, since you use only the 15 averages and not the rest of the data. You are testing the null hypothesis of whether $<A_i - B_i>_i = 0$ (with $i$ from 1 to 15), where $A_i$ and $B_i$ are random variables. If you compute not only their means but also their variances, you can compute the total variance using the fact that the variance of the mean is the mean of the variance (and not only the sample variance of your means), the t statistic and the p value yourself.

EDIT (after discussion with @whuber): This approach holds as long as the sample sizes do not get widely different, so that the data can be assumed to be identically distributed. This article proposes a paired T test for non iid data.

Not the answer you're looking for? Browse other questions tagged statistical-significance t-test mean paired-data or ask your own question.

1
Can a significance test be done on two variables which are 3,140 county averages? (Significantly different sample sizes.)

21
Paired versus unpaired t-test
3
How to test if 2 means are significantly different for non-normal non-paired data
1
Comparison among 3 paired data sets. (paired t-test, ANOVA?)
1
Can I do Paired T-test for averaged data
1
Unsure of whether to use an unpaired or paired t-test for two different samples
1
Can I use a chi-square test to determine whether my samples are independent or paired?
0
Which test to use? Paired or unpaired?
4
what is the difference between a two-sample t-test and a paired t-test