Can standardized $\beta$ coefficients in linear regression be used to estimate the $R^2$?

I am trying to interpret the results of an article, where they applied multiple regression to predict various outcomes. However the $\beta$'s (standardized B coefficients defined as $\beta_{x_1} = B_{x_1} \cdot \frac{\mathrm{SD}_{x_1}}{\mathrm{SD}_y}$ where $y$ is the dependent variable and $x_1$ is a predictor) reported don't seem to match the reported $R^2$: 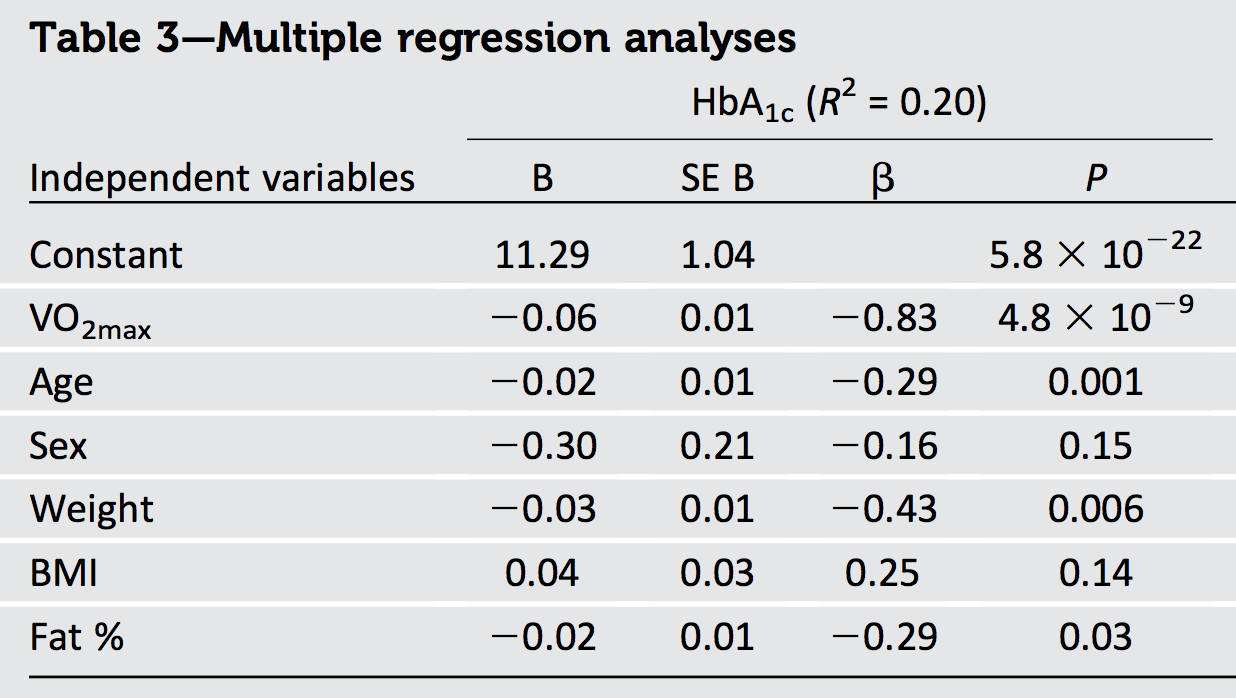 Also, the three predictors: weight, BMI and fat % are multi-collinear, correlated around r=0.8-0.9 with each other within sexes.

Additionally, might problems with the multicollinear predictors affect the $\beta$ of a fourth predictor (VO2max), which is correlated around r=0.4 with the aforementioned three variables?

Most of what we need to know can be seen in the case of two regressors $x_1$ and $x_2$ with response $y$. The standardized coefficients, or "betas," arise when all three vectors are standardized to a common length (which we may take to be unity). Thus, $x_1$ and $x_2$ are unit vectors in a plane $E^2$--they are located on the unit circle--and $y$ is a unit vector in a three dimensional Euclidean space $E^3$ containing that plane. The fitted value $\hat y$ is the orthogonal (perpendicular) projection of $y$ onto $E^2$. Because $R^2$ simply is the squared length of $\hat y$, we needn't even visualize all three dimensions: all the information we need can be drawn in that plane.

The nicest situation is when the regressors are orthogonal, as in the first figure. 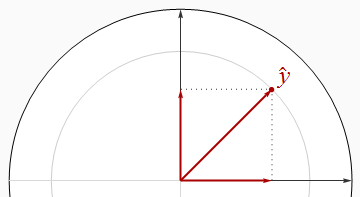 In this and the rest of the figures I will consistently draw the unit disk in white and the regressors as black arrows. $x_1$ will always point directly to the right. The thick red arrows depict the components of $\hat y$ in the $x_1$ and $x_2$ directions: that is, $\beta_1 x_1$ and $\beta_2 x_2$. The length of $\hat y$ is the radius of the gray circle on which it lies--but remember that $R^2$ is the square of that length.

Because the Pythagorean Theorem holds in any number of dimensions, this reasoning generalizes to any number of regressors, yielding our first result:

When the regressors are orthogonal, $R^2$ equals the sum of the squares of the betas.

An immediate corollary is that when there is just one regressor--univariate regression--$R^2$ is the square of the standardized slope. 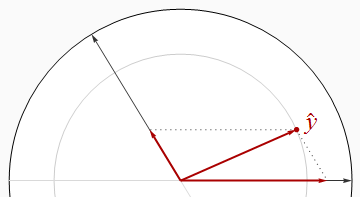 It is visually apparent in this image that the sum of squares of the betas is strictly greater than $R^2$. This can be proven algebraically using the Law of Cosines or by working with matrix solution of the Normal Equations.

By making the two regressors almost parallel, we can position $\hat y$ near the origin (for an $R^2$ near $0$) while it continues to have large components in the $x_1$ and $x_2$ direction. Thus, there is no limit to how small $R^2$ might be.

When regressors are correlated, $R^2$ may be arbitrarily smaller than the sum of squares of the betas.

However, this is not a universal relation, as the next figure demonstrates. 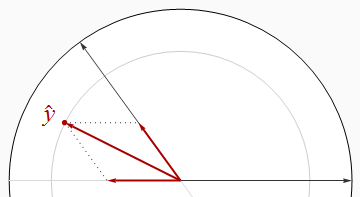 Now $R^2$ strictly exceeds the sum of squares of the betas. By drawing the two regressors close together and keeping $\hat y$ between them, we may make the betas both approach $1/2$, even when $R^2$ is close to $1$. Further analysis may require some algebra: I take that up below.

I leave it to your imagination to construct similar examples with positively correlated regressors, which thereby meet at acute angles.

Notice that these conclusions are incomplete: there are limits to how much less $R^2$ may be compared to the sum of squares of the betas. In particular, by examining the possibilities carefully, you may conclude (for a regression with two regressors) that

Assemble the column vectors $x_i$ into an $n\times p$ matrix $X$. The rules of matrix multiplication imply that

is the correlation matrix of the $x_i$. The betas are given by the Normal Equations,

Moreover, by definition, the fit is

The geometric analysis suggested we look for inequalities relating $R^2$ and the sum of squares of the betas,

The $L_2$ norm of any matrix $A$ is given by the sum of squares of its coefficients (basically treating the matrix as a vector of $p^2$ components in a Euclidean space),

The inequality is attained, for instance, when all the $x_i$ are perfectly positively correlated.

There is an upper limit on how large $R^2$ may be. Its average value per regressor, $R^2/p$, cannot exceed the sum of squares of the standardized coefficients.

What may we conclude in general? Evidently, information about the correlation structure of the regressors as well as the signs of the betas could be used either to bound the possible values of $R^2$ or even to compute it exactly. Absent that full information, little can be said beyond the obvious fact that when the regressors are linearly independent, a single nonzero beta implies $\hat y$ is nonzero, demonstrating $R^2$ is nonzero.

One thing we can definitely conclude from the output in the question is that the data are correlated: because the sum of squares of the betas, equal to $1.1301$, exceeds the maximum possible value of $R^2$ (namely $1$), there must be some correlation.

Another thing is that since the largest beta (in size) is $-0.83$, whose square is $0.69$--far exceeding the reported $R^2$ of $0.20$--we may conclude that some of the regressors must be negatively correlated. (In fact, $\text{VO}_{2\,\text{max}}$ is likely strongly negatively correlated with age, weight, and fat in any sample that covers a wide range of values of the latter.)

If there were only two regressors, we could deduce a great deal more about $R^2$ from knowledge of high regressor correlations and inspection of the betas, because this would enable us to draw an accurate sketch of how $x_1$, $x_2$, and $\hat y$ must be situated. Unfortunately, the additional regressors in this six-variable problem complicate things considerably. In analyzing any two of the variables, we have to "take out" or "control for" the other four regressors (the "covariates"). In so doing, we shorten all of $x_1$, $x_2$, and $y$ by unknown amounts (depending on how all three of those are related to the covariates), leaving us knowing almost nothing about the actual sizes of the vectors we are working with.

Not the answer you're looking for? Browse other questions tagged regression regression-coefficients multicollinearity r-squared or ask your own question.

3
Can you calculate $R^2$ from correlation coefficents in multiple linear regression?