What can be said about about significant predictors in simple regression that become insignificant in multiple linear regression?

I have two predictor variables: An indicator variable A and a continuous variable B. My response variable is continuous (and also bounded, have not made it logit for reasons of simplicity).

Crucial to the theory my study is about is the possibility that the variance explained by B is in large part explained by variable A. It doesn't seem like I am able to justifiably make any such claim.

But what can I say in regards to the impact of A and B on the response and their relationship with one another?

I am happy to provide more details if needed.

Here are the intervals --

FAB.Average is quantitative predictor, the HSSorSTEM is the indicator. My n = 30, but each datapoint is the average of 500+ observations, if that makes any difference.

I'm not quite sure what a joint confidence ellipse is (I work with a knowledgable statistician, but am not myself one), but here was my try at making one: 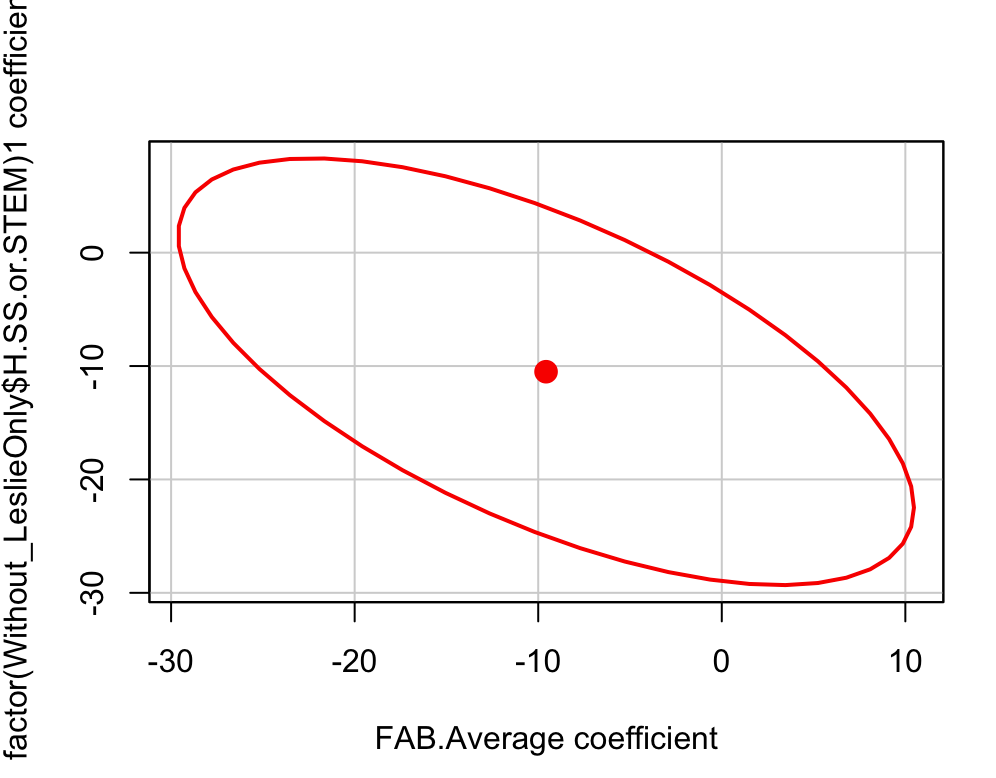 Per-se the information that something goes from being significant to not being significant in a slightly different analysis does tell you very little. It happens all the time and may very often indicate that results were not very robust and compelling in the first place. This should usually not be overinterpreted (or as Gelman says:'The Difference between "Significant" and "Not Significant" Is Not Itself Statistically'). Particularly, if there is no massive change in the regression coefficients, my first suspicion would be that there is nothing very interesting going on here.

Other possibilities include that the two variables could be correlated and as a result the model has trouble deciding between whether to explain things through one variable or the other. In the end, it compromises thereby attenuating the regression coefficients for both variables (and the evidence in favor of an effect) and partially as a result of that the resulting p-values are not significant. In contrast, you could even get a situation, where one of the regression coefficients reverses sign and is significant with a coefficient that on the face of it appears to not make sense (i.e. if you do not condition on the knowledge about the other predictor), but from what you say that is not the case here.

Not the answer you're looking for? Browse other questions tagged regression multiple-regression variance or ask your own question.

63
What is the effect of having correlated predictors in a multiple regression model?