I have to do a model for non-linear data with repeated measurements.

I worked with predatory insects. I did an experiment with 4 treatments, where per each treatment predators received a different diet during their nymphal development. When the predators reached the adult stage I assessed their predation rate in 2 days for every individual (in day 1 and day 5 after moulting respectively). The experiment had 2 replicates.

I am looking for a model in which I can see what had an impact on the predation rate (different diets(treatment), sex of the predator, etc.) and if there was a difference between the predation performance in day 1 and day 5.

However, the random effect is not significant therefore I am using a generalized linear model (glm) instead. 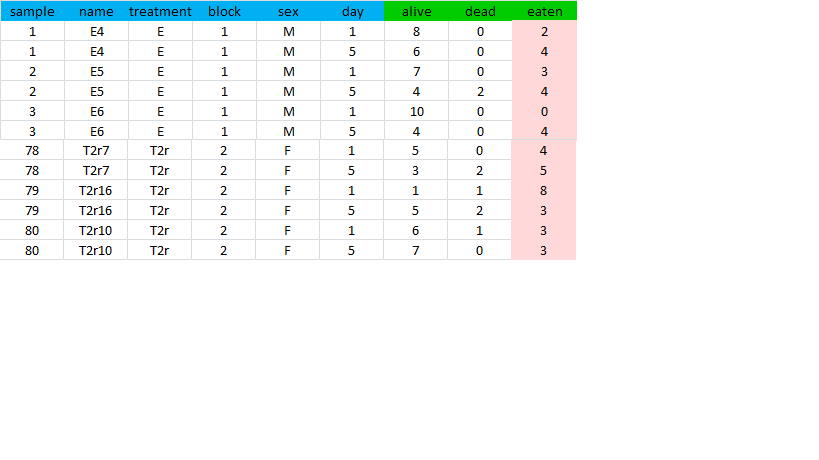 which is assuming that name in your data is the identifier of the individual or subject that the repeated measures are on, as it appears from the short data extract in your post. Note that this should be a factor, not numeric, in R.

Also, you can't use anova() to test for the "significance" of random effects, because, assuming that the likelihoods are calculated in the same way, this is equivalent to using a likelihood ratio test to test whether the variance of a random effect is zero. Since this test occurs on the boundary of the parameter space (ie. you are testing whether something that cannot take negative values is zero) this test is not appropriate. There are modifications to this test, such as that implemented in Stata:

When using glm() and glmer() in particular, since these are different packages, there is a distinct possibility that the likelihoods are computed differently, so in addition to the problem outlined above, a LRT would dangerous anyway.

You could, of course, fit a model with crossed random effects, such as:

Not the answer you're looking for? Browse other questions tagged r mixed-model lme4-nlme repeated-measures poisson-distribution or ask your own question.