I am currently estimating a stochastic volatility model with Markov Chain Monte Carlo methods. Thereby, I am implementing Gibbs and Metropolis sampling methods.

Assuming I take the mean of the posterior distribution rather than a random sample from it, is this what is commonly referred to as Rao-Blackwellization?

Overall, this would result in taking the mean over the means of the posterior distributions as parameter estimate.

Assuming I take the mean of the posterior distribution rather than a random sample from it, is this what is commonly referred to as Rao-Blackwellization?

Instead the Rao-Blackwellized estimator depends o the knowledge of the mean of the full conditional; but even then sampling is still required. I explain more below.

Suppose the posterior distribution is defined on two variables, $\theta = (\mu, \phi$), such that you want to estimate the posterior mean: $E[\theta \mid \text{data}]$. Now, if a Gibbs sampler was available you could run that or run a M-H algorithm to sample from the posterior.

How can you now estimate the posterior mean of $\phi$ using only these samples from the marginal posterior of $\mu$?

This is done via Rao-Blackwellization.

is called the Rao-Blackwellized estimator for $\phi$. The same can be done by simulating from the joint marginals as well.

Here $y$ is the data given to you and is thus known. The Rao Blackwellized estimator would then be

Notice how the estimator for the posterior mean of $\phi$ does not even use the $\phi$ samples, and only uses the $\mu$ samples. In any case, as you can see you are still using the samples you obtained from a Markov chain. This is not a deterministic process.

We observe that the RB estimate does much better (as it exploits the conditional information): 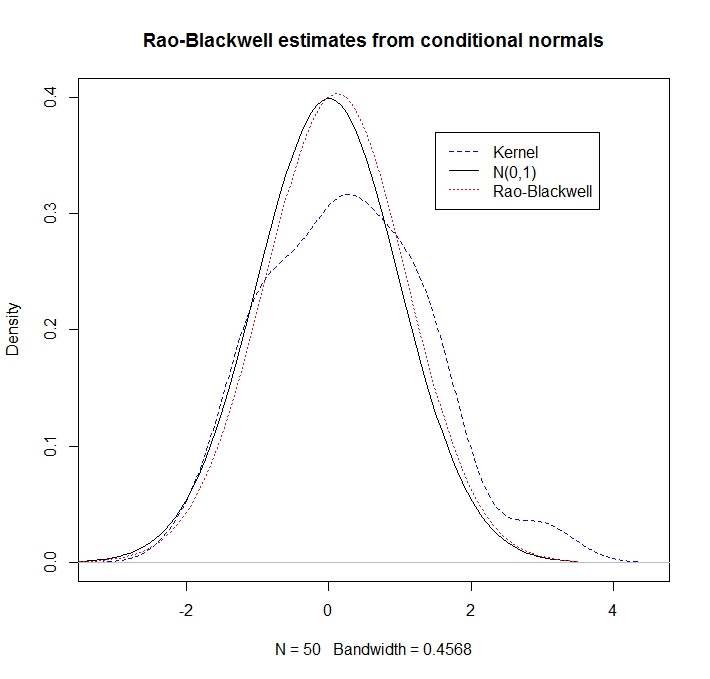 Not the answer you're looking for? Browse other questions tagged markov-chain-montecarlo monte-carlo gibbs point-estimation rao-blackwell or ask your own question.

7
Using all Metropolis-Hastings proposals to estimate an integral
4
Can a posterior expectation be used as a approximate for the true (prior) expectation?
2
Why can Gibbs sampling outputs be used in Rao-Blackwellization?
4
Obtain marginal CDF from joint CDF by simulation
2
How does this Sampler work for the Concentration parameter of Dirichlet Process?
0
How to built Gibbs sampler of Mixture Bayesian regression in R?