Is this a skewed distirbution or bimodal? 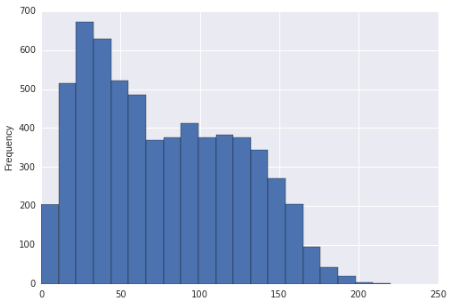 If the histogram were actually the distribution that the data were drawn from (it would then be a piecewise uniform one, clearly), you could say it was right skew (by pretty much any reasonable measure) and multimodal, since there's clearly more than two modes.

But presumably we're trying to use the histogram to infer something about the population distribution.

Here we have two problems.

If you have the original sample you can avoid the second problem to a greater extent by considering more than one display -- not only can histograms be done for a few different bin-widths and bin-origins but other displays can be used -- QQ-plots, empirical cdfs and so on. (They're a bit harder to learn to extract the information from, but they're not nearly so subject to the those kinds of problems.)

That said, given your large sample size and assuming your sample is a random sample of some population, we would be pretty safe in concluding that the distribution from which such a sample were drawn would be right skew. The impression of bimodality is relatively weaker (in the sense that we might reasonably see that happen with a population that's not actually bimodal, at least in a smaller sample), but I'd still mention the appearance of bimodality in the display.

Completely ignoring the issue in 2. for the moment, we can get some sense of whether that histogram could occur with a unimodal population by considering a just-unimodal distribution that's close to what is observed and seeing if it can produce something as far from unimodal as what you observe in the sample.

To simplify the situation, consider the region between about 67 and 133* (where I have included my estimates of the bin counts for the relevant bins in that region): 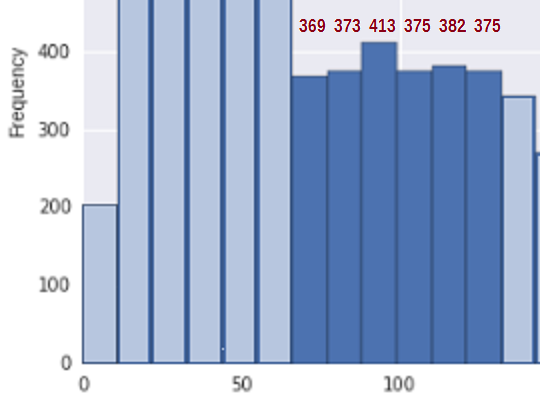 Either side of this, in several bins before and after this segment, the density is pretty clearly decreasing; the question is, can we reasonably regard this piece as a random sample from a non-increasing segment of a distribution?

* Note that the impact of choosing a particular part and focusing on this part in particular is being ignored here, but this is not something that should really be ignored (this definitely carries the problem of "looking at the data" -- for example, should we really have included the next bin after the last one we included?). However, I am going to charge ahead anyway to give the sense of a simple analysis that would give a ballpark idea of whether a nonincreasing density is compatible with the data (conditional on the bin placement). Note that this "picking out the weird part to look at" like this is generally going to increase the chance of finding something "significant", so if we don't find anything, there's really little reason to say that it couldn't be unimodal.

The "best" non-increasing case to produce our display will be the uniform.

The total count in this region is 2287 and there are 6 bins.

What's the chance that a sample of size 2287 from six equally-likely categories could produce an total-up-jump, $U$ of at least 51? That's something easily found by simulation.

Trying that in R:

So this suggests that in a uniform section of a density you could easily see that amount of increase from that size of sample -- about half the time it would increase at least that much if it were uniform.

Of course we might have chosen some other measure, but that's sufficient for me. I regard that as consistent with uniformity in that section, and hence the histogram is not inconsistent with a random sample from an overall unimodal distribution.

[Edit: for completeness I later went back and looked at a couple of other reasonable test statistics to see if it would make much difference, but they didn't indicate anything either]

That's not enough to declare it to be unimodal, of course. We just can't tell that it's not unimodal.

So I'd describe it as appearing to be right-skew. If you must talk about whether or not the population has more than one mode, I'd only go so far as to say that there's some possibility of a second mode somewhere near 100, but it's difficult to conclude anything from this display.

111
Assessing approximate distribution of data based on a histogram