We are measuring weekly staff performance, so that management can make informed decisions about task assignment. [1] To the end we have measured performance as follows:

Assuming this approach is valid (challenges welcome), we are now faced with interpreting the following chart. We are looking to identify:

Can we use boxplot measures and the mean to identify these types? 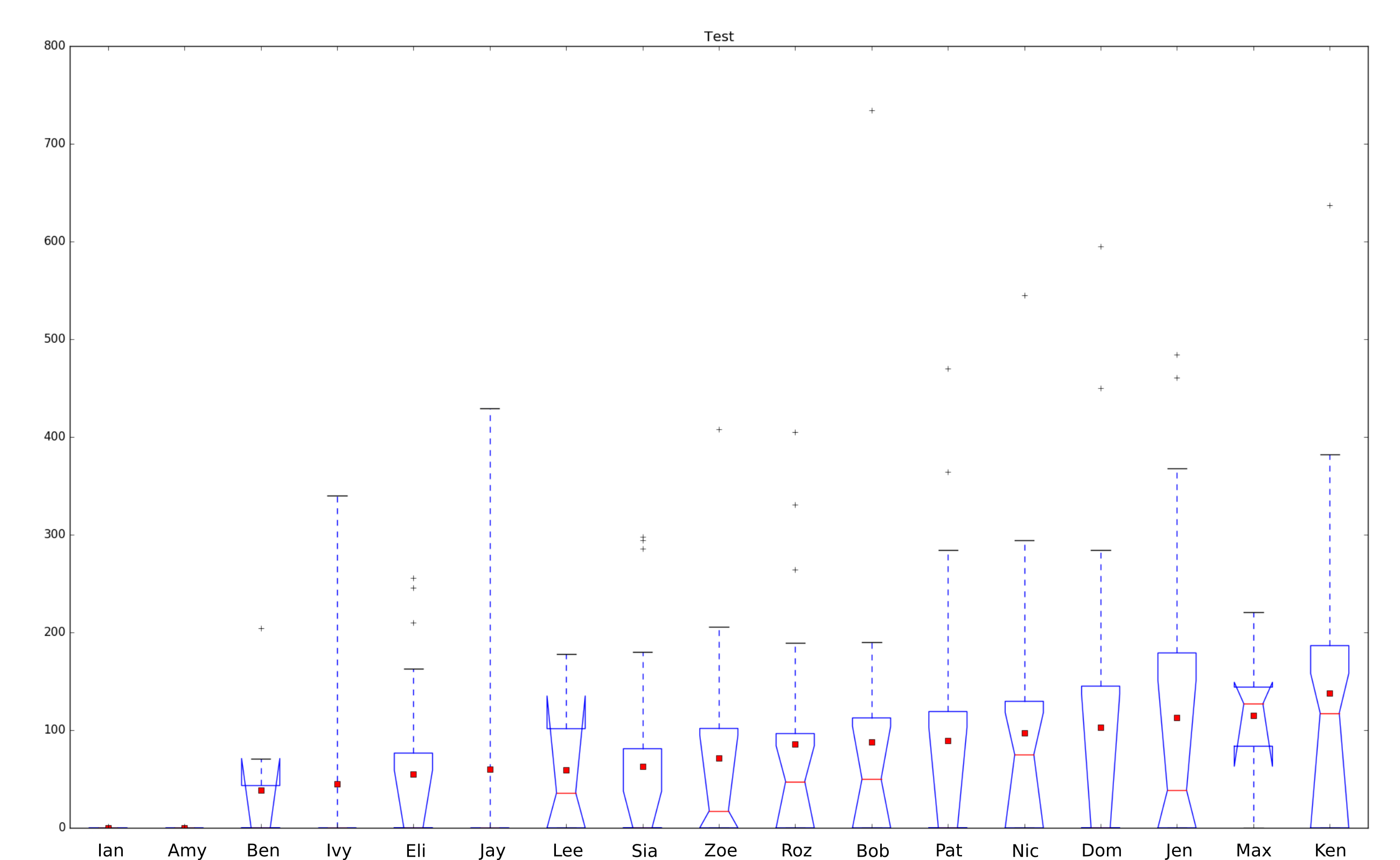 To make the question more concrete, here are some sample interpretations for validation/correction (feel free to use or ignore):

If the batches differ in complexity then assigning complex batches to high performers is guaranteed to make them do worse. So unless you're accounting for the different difficulty of batches when comparing performance, the next time you go "oh, they're doing badly". People are terrible at appropriately adjusting for this via intuition (give them a measure and they'll use it).

The point was to measure performance, but if it's used the way you suggest it no longer measures performance, it confounds it with task complexity. If there's some good measure of task complexity/difficulty, it would be possible (e.g. via regression methods or similar) to account for this and still have a measure of performance (by giving a way to have a complexity-adjusted performance).

Response to the discussion of the boxplots (using your numbering):

\1. The notches aren't "weird"; the interval they give is just further out that at least one of the quartiles (/hinges). That might just by accident be too small a number for you to regard it as reliable, but if you apply some sensible criterion to decide your n is large enough to use, it probably won't really correspond to this -- maybe it would be half as many or twice as many as saying "the plot looks funny".

\3. On sample mean, sure. But not on all sensible measures. Note also that these estimates are so noisy that every median (and every mean, though that's not really relevant) is inside Ken's notch-interval, so saying "Ken is fastest" is like saying my coin is better than your because when we each tossed 10 times I got 6 heads and you got 4. It's probably just noise.

\4. Nothing about the plot makes 25% "too many", though the interpretation that there are at least 25% zeros is the case for everyone but Max.

\6. This is simply a result of the fact that the distribution is reasonably skew. "In their zone" doesn't mean anything I can discern but whatever it's intended to mean, this isn't evidence for anything than a count variable with a small mean (especially with a fair chance of a zero) is likely to be pretty right skew. There's no basis for assigning much meaning to that, it's almost certainly a consequence of the thing you're measuring, and the small sample sizes would suggest that anything above "it's just the nature of the process" is probably noise.

\8. -- 11. No, it's probably just noise. You don't have nearly enough data here for this level of detailed conclusion. "In their groove" doesn't mean anything to me, but whatever it is, this doesn't show it

11
How to interpret notched box plots

4
Boxplot with glme
1
boxplot : computed values combined with raw data
2
Reproduce boxplot with only data points at given quantiles
3
Box plot with just two values does not have its whiskers in R
13
What information does a Box Plot provide that a Histogram does not?
2
Boxplot with whiskers close to zero
1
Help needed with my box plot