I am interested in knowing whether there is any discrete probability distribution similar to Poisson but also extended in the negative value part (i.e., it can take negative values and there is no a lower limit for the values it can take).

Is there any family of discrete distributions meeting these requirements?

More requirements: The shape is not necessarily symmetrical. There is one more condition to be met: values close to $-1$ and $1$ are very likely to be observed, but value $0$ is very improbable. Besides this, the probabilities of observing values greater than $1$ or lower than $-1$ monotonically decrease (more or less like a Poisson distribution does, but also in the negative side).

Answering the comments below: yes, my data follow a sort of bimodal distribution with modes in $1$ and $-1$.

There's an infinite number of such distributions -- one need merely a way to get a probability for each value of $i$ and one has just such a distribution. It's a simple matter to spend a leisurely weekend afternoon or an evening inventing a hundred of the things.

However, few are explicitly named in the literature.

One example that does come up now and then is the Skellam distribution, which is the distribution of the difference between two independent Poisson variates. If the two Poisson parameters are equal, it is symmetric. 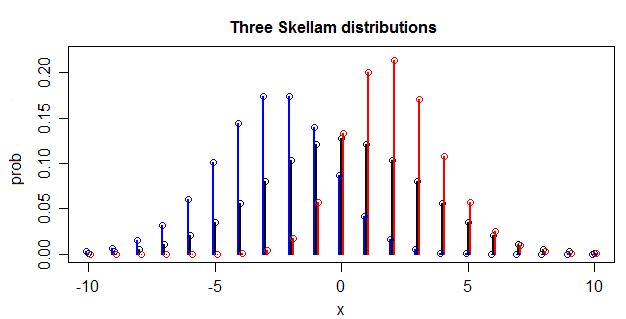 or indeed any other method that is of interest/relevance to some problem.

For example, if you took the positive and negative halves as geometric, you'd have 4 parameters in the distribution (the two geometric p's, and the two mixture probabilities on those geometric parts; the probability at zero being defined by the other two, since they must add to 1) 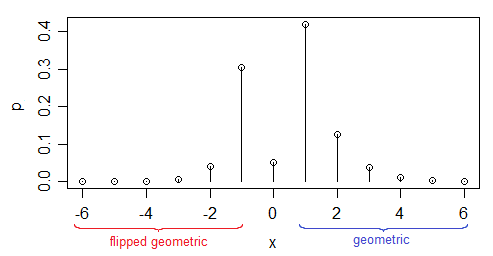