What do statisticians do that can't be automated?

Will software eventually make statisticians obsolete? What is done that can't be programmed into a computer?

@Adam, if you think of statistical researchers analogously to those in other fields - people who build upon the existing methodology and knowledge - then it might make it more clear that the answer to your first question is 'No'.

Statisticians that make a living from simply applying canned software packages could quite possibly be replaced by computers for every step except writing the discussion section of a paper where the results must be interpreted. So, in that sense, yes - it could be automated (although it would have to be a complicated piece of software that has one hell of a natural language processor).

However, as most researchers eventually figure out, the "canned" routines that people often use are pretty limited and must be modified (or new methods entirely must be developed) to answer specialized research questions - this is where the human aspect of statistics is indispensable. Or, a researcher must simply settle for a somewhat different, but related, research question that can be answered using classical methods.

Most statisticians I know work in research jobs (e.g. professors, research scientists) where their primary role is to develop new methodology. If this process could be automated, meaning that a computer can formulate and crank out useful new methodology, then I'm afraid researchers in every field would be obsolete.

Computers will only make statisticians obsolete when strong AI makes humans as a whole obsolete.

The question reminds me of the question about, "If there are all of these robust statistical methods, why do people still use other methods?" Some of the answer is habit and training, but much of it is that the question is naive: "robust" doesn't mean "you don't have to think about and understand what you're doing", as the question implies.

I mean, you could download the R statistics package today, and be doing any basic statistical technique by nightfall. You could then download a couple of packages and start using methods so esoteric that most of us haven't even heard of them. The question is: would you get reasonable answers? The answer is: probably not.

The algorithms are automated, but you still have to make many judgement calls all along the investigative path: from the plan of attack to the final judgement of whether the results actually make sense. To get to that point, you're really talking about Star-Trek-like computers where you can say, "Computer, tell me...", by which point pretty much every human vocation is obsolete.

What can a statistician do that a computer can't? Write the original program they get replaced by.

Beyond that somewhat silly answer, the root of the question is ignoring the actual science of statistics in favor of its mechanics, and entirely discounting the role of the creative process in statistical analysis. This is, to use Peter Flom's car example, like saying cars are built using rivets and welds, so there's no reason the new Mustang couldn't be designed by riveting and welding robots.

A tremendous amount of the doing of statistics involves subject-matter expertise, judgement calls, and creativity. "Canned" analysis running from an algorithm often won't get you the best answer, and there are myriad documented examples where using automated methods actually gives you the wrong answer - or at least not the answer you think you're getting. The use of stepwise p-value based variable selection procedures and analysis based on purely numerically defined quantiles are two I'm most familiar with, but I'm sure you can find a wealth of others out there.

Even if all that was still somehow automated, there is the matter of interpreting results. The statistician (or statistically-inclined scientist)'s job isn't done when you obtain a regression coefficient or p-value. What does that finding mean. What are the caveats? What does this represent in the context of what's come before?

Finally, you have the development of new methods. Statistics isn't something that was simply laid out long ago by people whose names we recognize - Fisher, Cox, etc. It's an evolving field, and you can't program a new method into a computer until a person develops the method itself.

Another way to interpret this question might be: "has the rapid increase in automated statistical techniques in recent years corresponded with a decreased demand in jobs for dedicated statisticians and data analysts?"

We can address this question by looking at the data 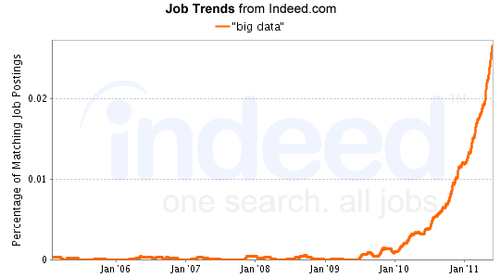 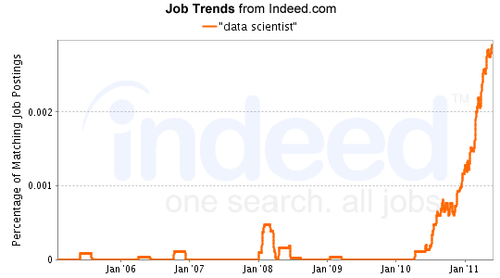 I don't entirely agree with the premise of the question, i.e. I think there is no way in which computers could ever hope to replace statisticians, but to put a concrete example to why I think that:

The work which statisticians do with scientists, particularly, in the design and interpretation of experiments, requires not only a human mind but even a philosophical bent which it is inconceivable that computers could ever show.

Unless we end up in some sort of Skynet type situation, of course, in which case I reckon all bets are probably off as far as the future of all humanity, never mind about just the statisticians, is concerned :-)

The question suggests a naive view of a statistician-—that it's all about checking to see if a p < 0.05 and reporting some numbers and standard graphs. If that's what you mean by statistician then you are correct in your implication that much of it could be entirely automated. But that's not what statistician means.

Define your term statistician though, and you might get better answers.

Loading a statistics package onto your computer doesn't make you a statistician any more than buying a car makes you able to drive.

Even if the statistician just applies "canned" routines there are lots of questions.

But the job starts way before the computer is turned on, and ends long after the statistical package is turned off.

Before: What does the client want to do? Often this is a lot of work! What data does the client have? Oy vey! The variables are labeled V1 to V828171 Which are which? What is the state of the literature? What will the client expect? How technical should it be?

After: What do results mean? (and not just "this means that the regression is significant") How should the results be explained to the client? What other questions do the results raise?

It will, I think, be a long time before computers can do this.

Academic studies which look at the probability of automation of different occupations or task do not think that statisticians will be soon substituted by computers. See for example the controversial Frey & Osborne (2013) study which ranks occupations according to their probability of computerization, statisticians are ranked low 213 out of 702 with a probability of 22% (see table in the appendix). If you are further interested, see also the Slate article here.

Arntz et al. (2016) (here an The Economist article) look at tasks rather than occupations for the European Union and come to a similar conclusion: Doing "Complex Math or Statistics" is statistically significantly negatively related to job automatibilty (see Table 3).

But some caution is advisable, academics and/or economists have not always been very good in predicting the future (the Nobel laureate Robert Lucas for example concluded in 2003, a few years before the financial crises, that the "central problem of depression prevention as been solved, for all practical purposes, and has in fact been solved for many decades."). Both studies appear to be working paper, which are widely discussed but have not been published in standard peer-reviewed journals.

Regarding the academic debate, here you can find an overview article about the state of research about automation.

I think that AI will only make statisticians smarter and more competitive. Why? Because this is the intent of artificial intelligence since their conception many decades ago...

Not the answer you're looking for? Browse other questions tagged machine-learning dataset careers or ask your own question.

5
Is there a software package designed to automatically check the assumptions of various statistical tests?
1
Why is there no standard script or software package for regression which explains and interprets results in layman's terms
1
Deep learning of Models!

12
What is it that a statistician does?
9
What data and statistics skills are currently in high demand and where are they in high demand?
5
What statistical tools does a analyst (financial) require?
25
What is the daily job routine of the machine learning scientist?
12
Is automated machine learning a dream?
1
Given a prediction problem, what principles drive the design of a neural network for that problem?