Detect outliers in mixture of Gaussians

I have a ton of univariate samples ($x_i \in \mathbb{R}^+$). I'd like an automated method to check for outliers and identify the outliers, if any are present. A reasonable model for the distribution of the non-outliers is a mixture of Gaussians. The number of Gaussians in the mixture and their parameters are not known a priori. Can you suggest a simple method for identifying outliers? Do you have any recommendations? It'd be nice if it were simple to code up in Python.

Something quick and dirty -- say, easy to understand, easy to implement, and pretty effective-- beats something complex but optimal. For example, I'm a bit reluctant to wade into something fancy based upon expectation maximization.

Update: People have asked how anything could possibly be an outlier, given these assumptions. (Presumably, the unstated concern is that this problem may be unsolvable: if every data set is always explainable by some mixture model, then there's no basis to ever identify anything as an outlier.) That's a fair question, so let me try to respond. In my application domain, I can reasonably assume that there will be dozens of samples from each component Gaussian. e.g., I might have 40,000 samples from a mixture of 100 Gaussians, where each Gaussian component has a probability no lower than 0.001 (so it is almost guaranteed that I have at least 10 samples from each Gaussian). I realize I didn't state this assumption earlier, and I apologize for that. However, with this additional assumption, I believe the problem is solvable. There exist examples of data sets where one or more points can be considered outliers (they cannot reasonably be explained by any mixture model). For example, consider a data set that has a single isolated point that is very far from all others: if it's far enough away, it can't be explained by the Gaussian mixture model and thus can be recognized as an outlier. In conclusion, I believe that the problem is well-defined and is solvable (given the additional assumption stated here): there do exist example situations where some points can reasonably be identified as outliers.

I have suggested, in comments, that an "outlier" in this situation might be defined as a member of a "small" cluster centered at an "extreme" value. The meanings of the quoted terms need to be quantified, but apparently they can be: "small" would be a cluster of less than 10 values and "extreme" can be determined as outlying relative to the set of component means in the mixture model. In this case, outliers can be found with simple post-processing of any reasonable cluster analysis of the data.

Choices have to be made in fine-tuning this approach. These choices will depend on the nature of the data and therefore cannot be completely specified in a general answer like this. Instead, let's analyze some data. I use R due to its popularity on this site and succinctness (even compared to Python).

First, create some data as described in the question:

This command specifies 102 components: 100 of them are situated like 100 independent draws from a normal(100, 20) distribution (and will therefore tend to lie between 50 and 150); one of them is centered at 250, and one is centered at 300. It then draws 100 values independently from each component (using a common standard deviation of 1) but, in the last component centered at 300, it draws only 9 values. According to the characterization of outliers, the 100 values centered at 250 do not constitute outliers: they should be viewed as a component of the mixture, albeit situated far from the others. However, one cluster of nine high values consists entirely of outliers. We need to detect these but no others.

Most omnibus univariate outlier-detection procedures would either not detect any of these 109 highest values or would indicate all 109 are outliers.

Suppose we have a good sense of the standard deviations of the components (obtained from prior information or from exploring the data). Use this to construct a kernel density estimate of the mixture: 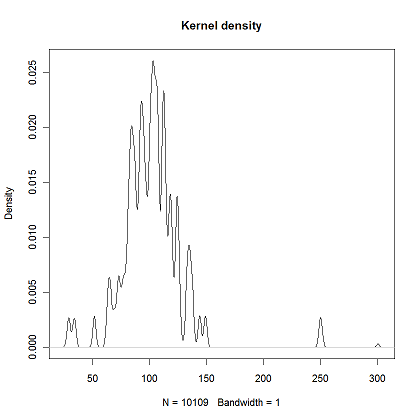 The (almost invisible) blip at the extreme right qualifies as a set of outliers: its small area (less than 10/10109 = 0.001 of the total) indicates it consists of just a few values and its situation at one extreme of the x-axis earns it the appellation of "outlier" rather than "inlier." Checking these things is straightforward: 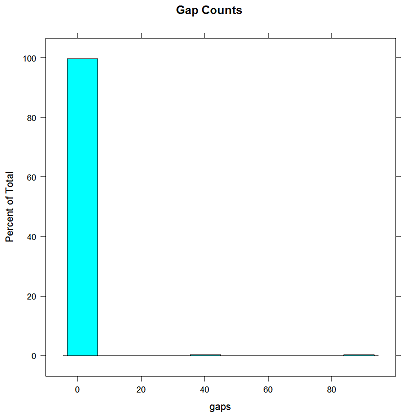 The density estimate d is represented by a 1D grid of 1000 bins. These commands have retained all bins in which the density is sufficiently large. For "large" I chose a very small value, to make sure that even the density of a single isolated value is picked up, but not so small that obviously separated components are merged.

Evidently the gap distribution has two high outliers (which can automatically be detected using any simple procedure, even an ad hoc one). One characterization is that they both exceed 25 (in this example). Let's find the values associated with them:

The 100 is too large to be unusual: that's one of the components of the mixture. But the 9 is small enough. It remains to see whether any of these components might be considered outlying (as opposed to inlying):

In order, they are

I'm not sure I understand the issue here, but the MAD-Median rule:

is pretty commonly used. Wilcox's WRS package in R has an out() function that fits this and returns the cases to keep and cases to drop, and I'm sure it would be easy to code in other languages. On the face of it this would be an answer to your question - one of many of course because there is a vast literature on outliers.

You may need a more restrictive definition of "outlier", of course. If you are happy with any observations that are consistent with a mixed distribution of 100s of Gaussian variables it is hard to imagine anything being ruled an outlier.

If your range of possible distributions of non-outliers is so broad, I don't think you can have any outliers. But perhaps you can impose some restrictions on the mixture?

In addition, in general, automated searching for outliers can only be a first step.

The most elegant solution I can think of is a mixture of Gaussians model, in which you have k Gaussians corresponding to your signal (with a prior encouraging their variances to be reasonably small), and 1 diffuse Gaussian capturing the outliers ("diffuse" means huge variance), where you specify the prior proportion of outliers (e.g. 1%) in a Dirichlet prior. If you don't want to do EM, you may consider using k-means as a warm-start, and then optimize iteratively, where the slow step is the optimization of the discrete cluster assignments. But if the (co)variances of the signal Gaussians are approximately equal, this means that most reassignments will be to/from neighboring clusters, or to/from the outlier cluster.

Not the answer you're looking for? Browse other questions tagged normal-distribution outliers mixture or ask your own question.