What does "performing PCA on a single time series" mean/do?

Yes, I already looked here but that's too high profile for my humble mind (and it's not exactly what I'm looking for).

Imagine we have a timecourse with time on the x-axis and some value on the y-axis (e.g. a signal). Now I can sample this timecourse to obtain a vector in a multidimensional vector space.

My question: What does it mean if I perform a PCA on this data? What is the PCA of a single vector (such as the timeseries) and how can I interpret the resulting eigenvectors?

PCA on a single time series can be done, of course. The result will be one principal component, which will be equal to the original series. Hence, technically it'll work, but it'll be pointless: you'll get your input series in the output.

Here's a MATLAB example. I got the PCA of a random series, then plotted the only principal component against the original series to show that it's the same thing. I also show you the differences between to series (adjusted for mean) is zero. 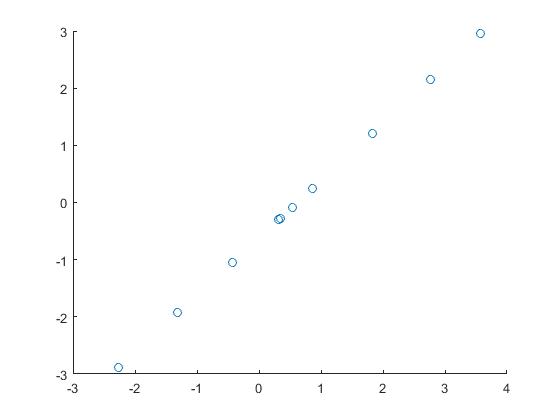 Maybe, “performing PCA on a single time series” means application of singular spectrum analysis (SSA), which is sometimes called PCA of time series. In SSA, multivariate data are constructed from lagged (moving) subseries of the initial time series. Then PCA (usually, SVD, which is PCA without centering/standardizing) is applied to the obtained multivariate data.

Not the answer you're looking for? Browse other questions tagged time-series pca or ask your own question.

20
How to interpret PCA on time-series data?

14
What do the arrows in a PCA biplot mean?
20
How to interpret PCA on time-series data?
52
How does centering make a difference in PCA (for SVD and eigen decomposition)?
2
What does the PCA().transform() method do?