Ask Question
Asked 5 years, 4 months ago
Active 5 years, 1 month ago
Viewed 411 times
2
$\begingroup$
This question already has answers here:
What can cause PCA to worsen results of a classifier? (5 answers)
Closed 5 years ago.

My random forest classification using all features has a very high out of sample accuracy (99%), but my reduced model using PCA has a very low out of sample accuracy (20%). Given that there are only 5 classifications, this is the accuracy we would expect if we randomly classified. So - something went wrong. I imagine I just made an error in my code, but I can't seem to figure it out. Is there anything obvious in my code below that I messed up?

FYI: I'm using the human activity recognition weight lifting dataset found here: http://groupware.les.inf.puc-rio.br/har. The dataset contains various measurements of human movement and has a "classification" for the type of exercise done. I am trying to build a random forest model that predicts the exercise class.

First read in the raw data and get rid of certain columns. This includes the first 7 columns which have irrelevant ID info, and columns that contains missing data. Additionally I get rid of the "classe" variable which is what I want to predict. I then normalize the data and split it into training and test sets.

I first use a random forest model and fit it on my training data, predict it on my test data, and calculate the out of sample accuracy, which is 99%.

Then I want to try to reduce the data to two principal components and use those two components to build a random forest model and compare the accuracy. First I create the model with 2 components and use it to fit and transform both the training and test datasets.

Then I use the random forest to build a prediction using the newly transformed x training data. And just like above, I use it on my test data to calculate the out of sample error rate.

I don't think this is a duplicate because as shown in the comments PCA is not causing my results to worsen because of any statistical reason, but there is instead an error in how it is being applied. Even when setting the number of PCAs equal to the number of features, it only predicted 25% on my test data, which is not realistic given a regular random forest predicted 99%. Even using just 2 PCAs explains 34% of the variance.

I think that PCA is being executed correctly but there must be an issue in how the results of the PCA are being applied to the test dataset in RF (last 2 blocks of code above).

I'm not sure if this will help diagnosis the issue, but I plotted the 2 PCAs that were run on the training set and colored them by which of the 5 groups they belong to. 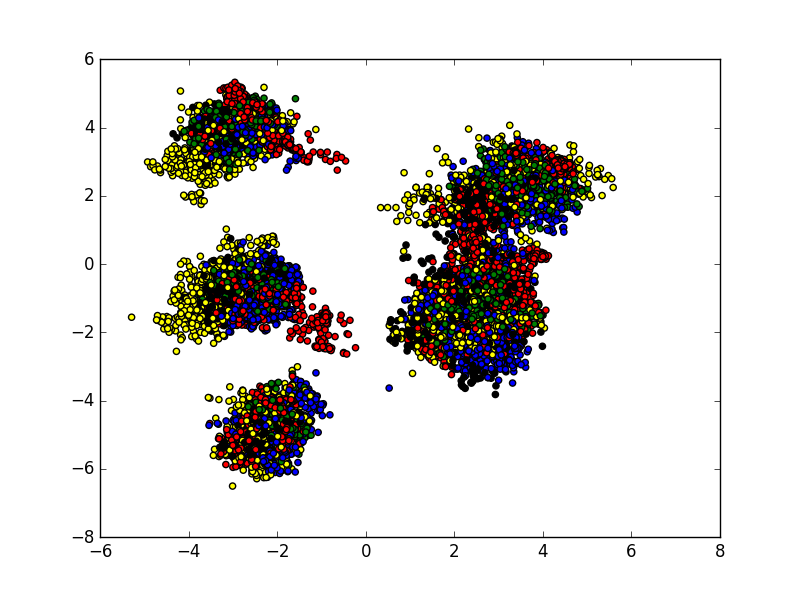 5 groups are very clearly being defined by these two PCAs but the colors don't match as I would expect. Any thoughts on where this went awry?

EDIT 2 I've decided to try and simplify the problem to see why my PCA does not appear to be giving me the results I expect to see. I run the same set of code on the sample Iris dataset that comes with sklearn as well as on the human activity recognition dataset. The results seem make sense when applied to the Iris dataset, but not when applied the human activity dataset. This indicates to me that perhaps the issue is not with my code, but some misunderstanding of the data.

I use the following code to reduce the Iris data to two principal components and then plot them colored by target group. As you can see the PCA seems to have done a good job identifying the 3 different groups. 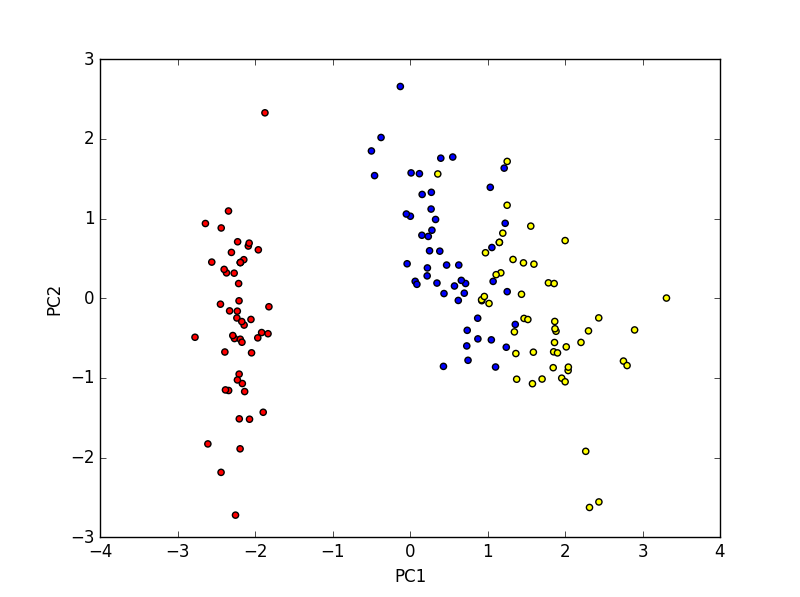 I then run the same code on the human activity recognition dataset. Note that I'm running the this on a slightly different version than I did initially, which is why the scatter plot looks a little different than the one above (also the principal components are plotted in the reverse order).

Nonetheless, as you can see, the PCA does a pretty good job dividing the dataset into 5 target groups (of which there are), but the colors that identify the groups do not indicate that the data is being partitioned correctly. Is this possible? 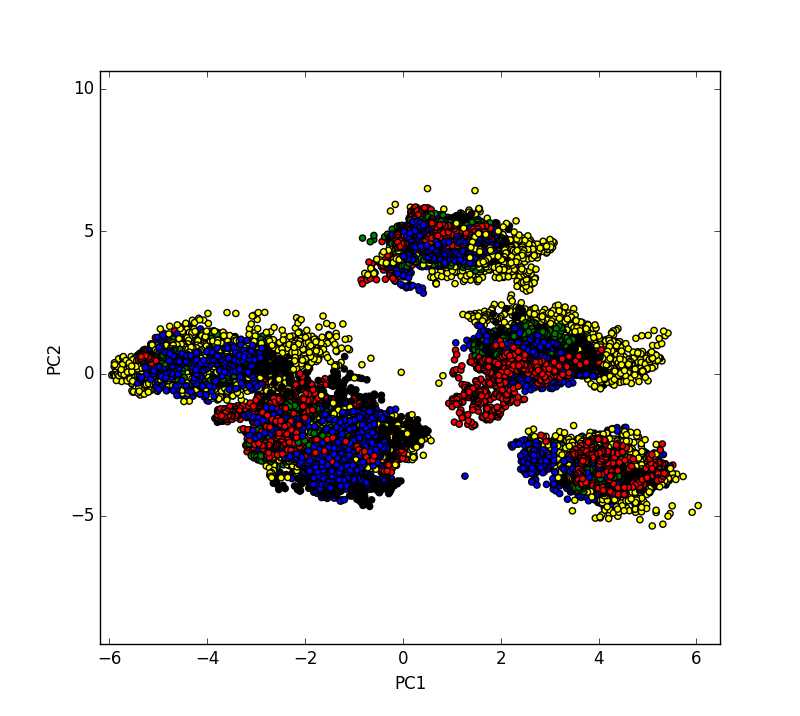 30
What can cause PCA to worsen results of a classifier?
29
How can top principal components retain the predictive power on a dependent variable (or even lead to better predictions)?
47
PCA and the train/test split