What is a good weight choice for the priori knowledge constant for a Bayesian Estimator?

For example, let's say we have set of restaurants. Those restaurants can be liked or disliked. If we treat "likes" as 1 and "dislikes" as 0 (and clicking on like or dislike as a vote), then we can treat the likability of restaurants as a Bernoulli trial.

For example, let's say for all of the restaurants in the country the average "likes"/votes is 0.7 or 70%.

Now a new restaurant opens up. It is a burger joint and 1 person clicks "like". Should that restaurant get a rating of 100% and immediately jump to the top of the best foodies list? Definitely not. There is only 1 vote.

A way to handle this is with a Weighted arithmetic mean:

Doing the math, we get:

So the new burger joint gets a rating of 76% likability.

But what should the value of m be? Is 4 a good choice? 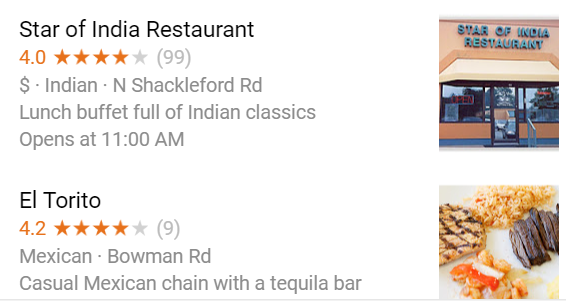 Is the El Torito place really better than the Star of India??

If one treats each star rating as up to five likes, then the above applies.

Looking at the Wikipedia article Practical example of Bayes estimators, it gives this example from IMDB and looking back in 2012, the constant of m was chosen to be 3000. Why 3000?

Given the above formula what is a good weight value for m?

The Naive Bayes spam filtering: Dealing with rare words article suggests a value of 3 is a good value if it is a random variable with beta distribution.

The Agresti-Coull Interval hints at a choice of the prior knowledge of z^2 for 3.8416 or essentially 4 given the rule of thumb "add 2 successes and 2 failures".

Is this really a Bayesian estimators question? Looking at this Bayes' Estimators, the formulas look a lot more complex...

Update: This paper adds insight to the choice of weight: TO THE BASICS: BAYESIAN INFERENCE ON A BINOMIAL PROPORTION It relates to a level of certainty.

I'm providing second answer since it is either: problem formulation that is unclear, or the answer provided by OP is wrong, since it does not address the problem. In my answer I'll try to refer to both of the cases.

First, let's try to define the problem. You have rankings of restaurants based on votes, where each vote is either "like" coded as $1$, or "dislike" coded as $0$. This means that we are dealing with Bernoulli distributed random variable. If you count the number of "likes", you have binomial distribution with $k_i$ likes per $n_i$ votes, for $i$-th restaurant. You are interested in the probability of restaurant being "good", $\theta_i$. The simple estimate of $\theta_i$ is $k_i/n_i$ (likes/votes), but as you already noticed, this does not account for the fact then restaurants differ in the number of votes they got, so some rankings are more reliable than others.

This problem may be formulated in terms of beta-binomial model, where we use conjugate beta prior for binomial likelihood function. In such case we define our model as follows

so we assume beta prior for $\theta_i$ parametrized by $\alpha$ and $\beta$. This is a Bayesian model, so you can recall that Bayesian model is defined in terms of likelihood and prior, that both taken together tell you about posterior probability of your parameter given the data and priors

So choosing a prior means making a subjective decision that can possibly affect your model (this is why Bayesian approach was criticized by some). Of course, you can make such choice of prior that brings as little as possible information into the model and let's "the data talk", i.e. weekly informative prior (there is no such a thing as "uninformative" prior). In case of beta-binomial model, you can choose for that beta distribution with parameters $\alpha = \beta = 1$, that leads to uniform prior. This means that you assume that $\theta_i$ can be any value between $0$ and $1$ with equal probability. Such assumption does not seem to bring much subjectivity into the model, but notice that what follows is that you assume a priori that $\theta_i$ has mean

Under beta prior the posterior mean is

You may be however interested in using informative prior, i.e. bringing some out-of-data information into your model. One such choice would be to center your beta distribution on global mean, with $\alpha$ and $\beta$ chosen in proportionally to how much you want to insist on your prior mean (how strongly would your prior shrink posterior towards it), as in the link that you posted. The more informative you make your model, the more influence it would have on your results. Unfortunately, since the final result depends on both your data and the prior, there is no single valid choice for the parameters, since they will always be problem-specific. On the plot below you can see different such choices. 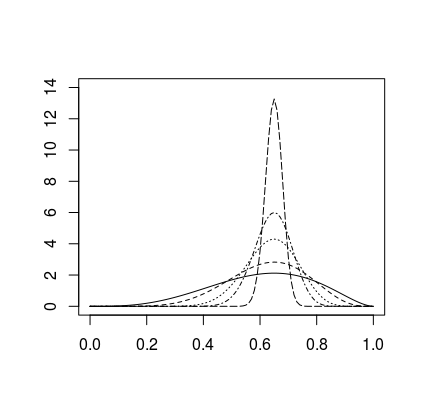 You may think of setting prior mean to $K/N$ (global mean) and sample size to $N-K$ (the sample values calculated as in the link you posted), but with choosing such prior you would need more data then is in the whole database to make your posterior estimate close to the arithmetic mean and this does not sound reasonable.

In both cases (weakly informative and informative priors), you would end up with totally valid Bayesian estimates (in fact, "handbook" examples), but the choice of $\alpha$ and $\beta$ is subjective and even if you decide for a weekly informative prior, so you still bring some a priori information in your model.

While this approach "works", there are few problems connected to your needs as described in the question:

So while there is no reason why choosing beta-binomial model would be a bad choice, it does not solve the the problem of deciding about the parameter.

Briefly commenting on other choices you considered:

The IMDB ratings example is a simple one, so you are right that in many cases they get more complicated.

Actually, the answer to your question is already given in the Wikipedia entry:

Note that $W$ is just the weighted arithmetic mean of $R$ and $C$ with weight vector $(v, m)$. As the number of ratings surpasses $m$, the confidence of the average rating surpasses the confidence of the prior knowledge, and the weighted bayesian rating ($W$) approaches a straight average ($R$). The closer $v$ (the number of ratings for the film) is to zero, the closer $W$ gets to $C$, where $W$ is the weighted rating and $C$ is the average rating of all films. So, in simpler terms, films with very few ratings/votes will have a rating weighted towards the average across all films, while films with many ratings/votes will have a rating weighted towards its average rating.

So in the formula

$m$ is prior information or belief. Saying it in plain English: by default the movies are rated closer to overall average of votes for all of the movies $C$, but as they grab more votes, they get closer and closer to average of their votes $R$. By specifying $m$ you decide about the threshold. There is no "good", or "bad" choices since it is a subjective choice based on how heavy you want the overall average $C$ to weight on your estimate. You simply state that one real vote counts as $1/m$ pseudo-votes based on overall average. It is called prior because it is based on a priori, out-of-data information -- it may be based on your beliefs, some previous experiments that suggest so, expert opinions, etc. It is one of the core aspects of Bayesian approach that you include such out-of-data information in your model. There is simply no objective criterion saying something like "4 ratings are not trustworthy, but 5 are", stating something like this would be ridiculous, so you are forced to make some arbitrary decision on it.

This estimator is designed to have threshold that can be flexibly adapted to your needs. For example, if your site has on average 1000 ratings per item, you do not want to threat items with 5, 10, or even 100 ratings as equally reliable as the majority.

Of course, you can always try to find optimal $m$ that maximizes some optimality criterion, e.g. correlation of ratings with movie theater's ticket sales, but then it would be hard to call it prior since it'd be just some unknown parameter to maximize. Then it also wouldn't be a Bayesian estimator. If the subjective aspect of this method does not appeal to you, you can always use arithmetic mean of the ratings, i.e. $m=0$. This does not use any arbitrary threshold.

Not the answer you're looking for? Browse other questions tagged bayesian estimation weighted-mean point-estimation or ask your own question.

529
What is the intuition behind beta distribution?
186
What intuitive explanation is there for the central limit theorem?
88
What is an "uninformative prior"? Can we ever have one with truly no information?
47
What references should be cited to support using 30 as a large enough sample size?
38
Do Bayesian priors become irrelevant with large sample size?
31
Wikipedia entry on likelihood seems ambiguous
9
How is prior knowledge possible under a purely Bayesian framework?
9
Beta as distribution of proportions (or as continuous Binomial)
2
bayesian classification unknown domain
0
Bayes weighted average understanding with an example and 2 additional questions
See more linked questions