I run two lmer tests, one with and one without the interaction term between fixed effects. The problem is that the former gives an output result that makes no sense to the actual data (i.e. negative slope instead of positive), whereas the latter shows the expected output. Why does this happen and even though the interaction is significant (and also makes sense) does it mean that I should not include it in the model due to wrong output? Would it be better to run a model with only the fixed factors and another with the interaction term alone?

Below is the models and their outputs. Thank you!

The meanings of the fixed effects change when you add an interaction, and often it makes no sense to interpret the main effects in the presence of an interaction

However, with the addition of the interaction treatment:time, treatment3 is now the mean difference in amp.sqrt between the treatment1 group and the treatment3 group with the other variables held constant, but in particular with time held equal to it's reference level.

In order to ascertain whether it makes any sense at all to interpret the main effects in the presence of the interaction it is important to understand the data. As mentioned above, the main effect for treatment3 now means the difference between the treatment3 and treatment1 group, when time is at it's reference level(-14.929). The interactions then give the additive differences for each combination of levels of the factors.

So we can arrive at these interpretations of your output:

If this still seems "odd" to you, then a simple plot may make help to make more sense of it: 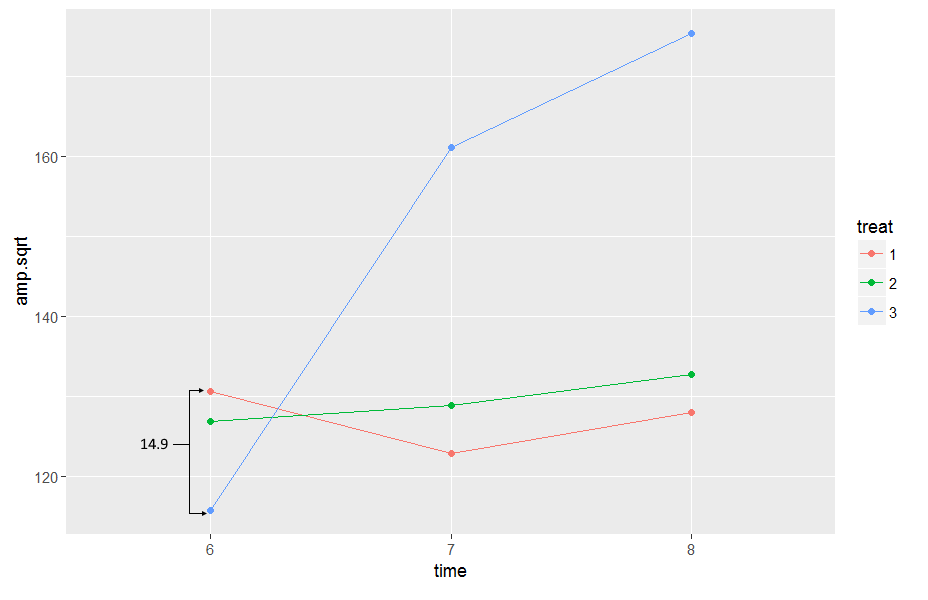 So to pull the discussion back to your question "Why is there an odd output result when adding an interaction term", I would say that there doesn't appear to be anything odd. The main effects just have a different interpretation, which is not particularly useful: So looking again at the treatment3 -14.929 estimate, this means that the response is 14.9 units lower in the treatment3 group, than the treatment1 group at time=6, as indicated on the plot. Moreover, if we look at the output for the model without the interaction, there are positive estimates for the time and treatment variables. This is consistent with the above plot because we see from the plot that on average there is an increasing trend in the response with increasing time (consistent with the positive estimates in the no-interaction model for time). Also, on average the lines on the plot fortreatment1 and treatment2 are similar to each other (consistent with the fixed effect of treatment2 in the no-interaction model being small), while on average the line for treatment3 is much higher than that for the other treatments (consistent with the large fixed effect for treatment3 in the no-interaction model).

Not the answer you're looking for? Browse other questions tagged r interaction or ask your own question.

2
How should I report the results from a mixed model with vs without an interaction term?
2
Relevance of Mixed Model Estimates vs. Observed Means

2
R: interaction in model output
2
F-test differences Stata and R
3
Is an LMER appropriate with only one x per participant?