Why use regularisation in polynomial regression instead of lowering the degree?

I recently made a little in browser app that you can use to play with these ideas: Scatterplot Smoothers (*).

Here's some data I made up, with a low degree polynomial fit 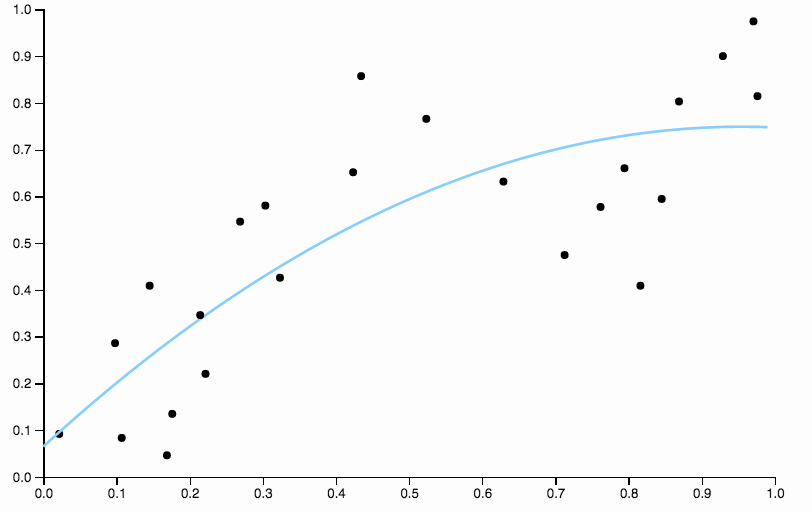 To rid ourselves of bias, we can increase the degree of the curve to three, but the problem remains, the cubic curve is still too rigid 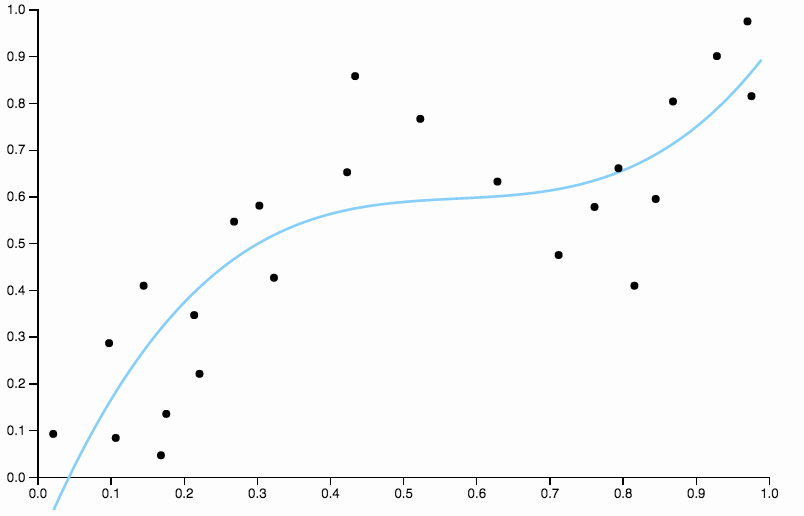 So we continue to increase the degree, but now we incur the opposite problem 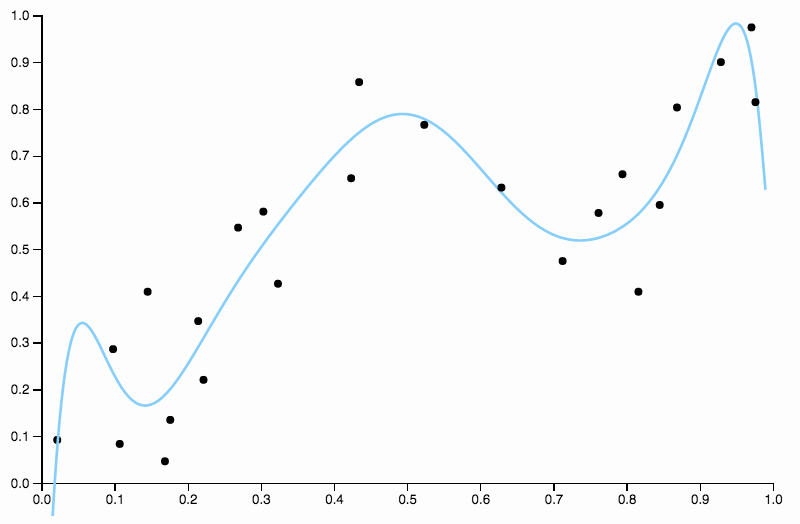 This curve tracks the data too closely, and has a tendency to fly off in directions not so well borne out by general patterns in the data. This is where regularization comes in. With the same degree curve (ten) and some well chosen regularization 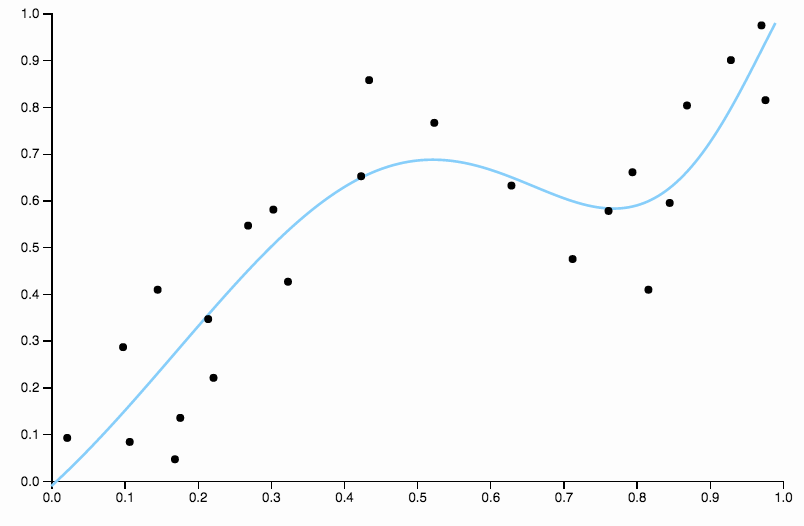 We get a really nice fit!

It's worth a little focus on one aspect of well chosen above. When you are fitting polynomials to data you have a discrete set of choices for degree. If a degree three curve is underfit and a degree four curve is overfit, you have nowhere to go in the middle. Regularization solves this problem, as it gives you a continuous range of complexity parameters to play with.

how do you claim "We get a really nice fit!". For me they all look the same, namely, inconclusive. Which rational are you using to decide what is a nice and a bad fit?

The assumption I'm making here is that a well fit model should have no discernable pattern in the residuals. Now, I'm not plotting the residuals, so you have to do a little bit of work when looking at the pictures, but you should be able to use your imagination.

In the first picture, with the quadratic curve fit to the data, I can see the following pattern in the residuals

I'd refer to these behaviours as local bias, there are regions where the curve is not well approximating the conditional mean of the data.

Compare this to the last fit, with the cubic spline. I can't pick out any regions by eye where the fit does not look like it's running precisely through the center of mass of the data points. This is generally (though imprecisely) what I mean by a good fit.

Final Note: Take all this as illustration. In practice, I do not recommend using polynomial basis expansions for any degree higher than $2$. Thier problems are well discussed elsewhere, but, for example:

I instead, in a situation like you describe, reccomend using natural cubic splines along with regularization, which give the best compromise between flexibility and stability. You can see for yourself by fitting some splines in the app. 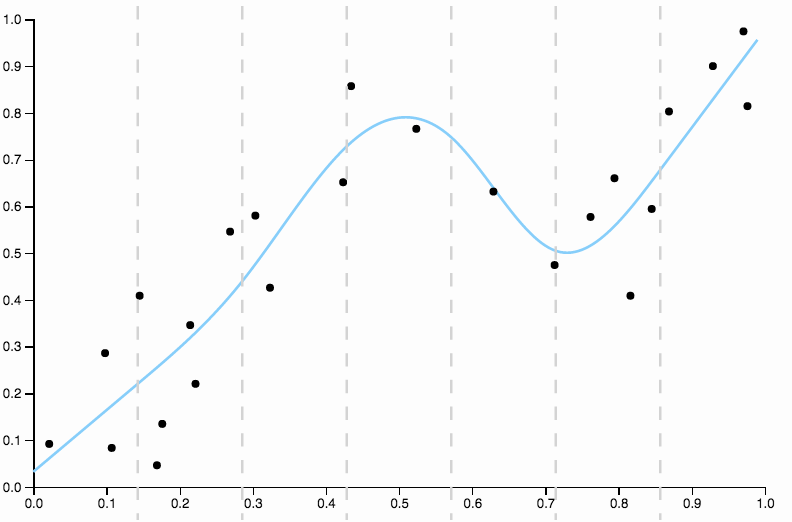 (*) I believe this only works in chrome and firefox due to my use of some modern javascript features (and overall lazyness to fix it in safari and ie). The source code is here, if you are interested.

No, it isn't the same. Compare, for example, a second-order polynomial without regularization to a fourth-order polynomial with it. The latter can posit big coefficients for the third and fourth powers so long as this seems to increase predictive accuracy, according to whatever procedure is used to choose the penalty size for the regularization procedure (probably cross-validation). This shows that one of the benefits of regularization is that it allows you to automatically adjust model complexity to strike a balance between overfitting and underfitting.

For polynomials even small changes in coefficients can make a difference for the higher exponents.

$L_2$ regularization ( least squares ) usually encourages many small coefficients but none exactly 0 and therefore the higher order monomials are able to make a difference.

All the answers are great and I have similar simulations with Matt to give you another example to show why complex model with regularization is usually better than simple model.

I made a analogy to have intuitive explanation.

If two persons are solving the same problem, usually the graduate students would work better solution, because the experience and insights about the knowledge. 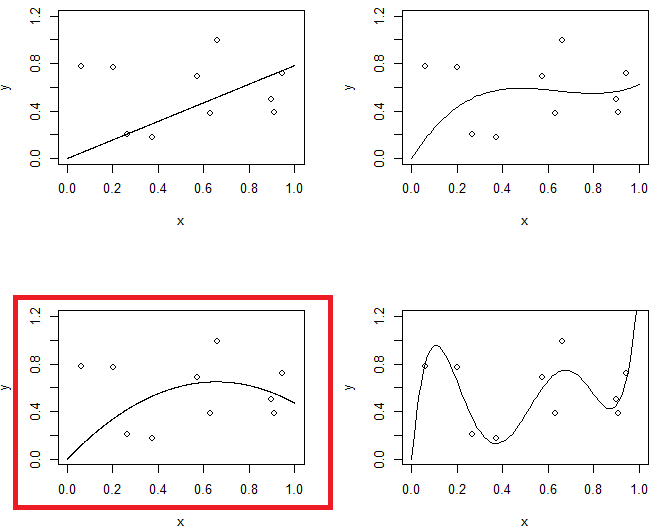 On the other hand, in the second experiment, we will use 5th order model with different level of regularization. Compare last one with the second order model. (two models are highlighted) you will find the last one is similar (roughly have the same model complexity) to parabola, but slightly more flexible to the data well. 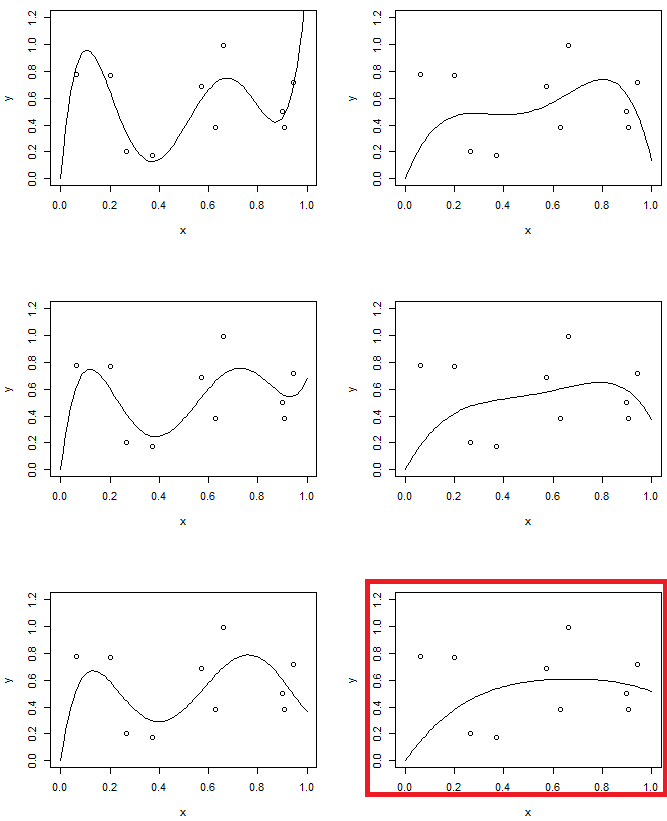 Model Complexity (model flexibility) is about representing the structures hidden in the data. To take an example of polynomial curve fitting, a higher-order polynomial (say, parabola/quadratic) provides more flexibility to represent the hidden structures compared to a lower-order one (say, line/linear) if there is indeed a hidden parabolic structure (that we found using EDA).

So, where does Regularization come in?

The observations/outcomes of a random experiment are noisy (we assume gaussian noise as a good approximation). When we use a higher-order polynomial, the higher the polynomial, the more the training points that lie exactly on the fitted curve. But, this results in poor generalization and the test set results are disappointing.

When we examine the coefficients of the higher order polynomials, they carry very high values. What has happened is that even though the model is flexible, it has tuned itself to the gaussian noise, so much so that the fitted curve oscillates rapidly near the ends of intervals between data points. So, during testing, a slight off-x results in a big off-y.

The choice between higher order polynomial and regularization is not that of excluding one for the other, but that of striking a balance between how higher the polynomial can be without losing too much on generalization. 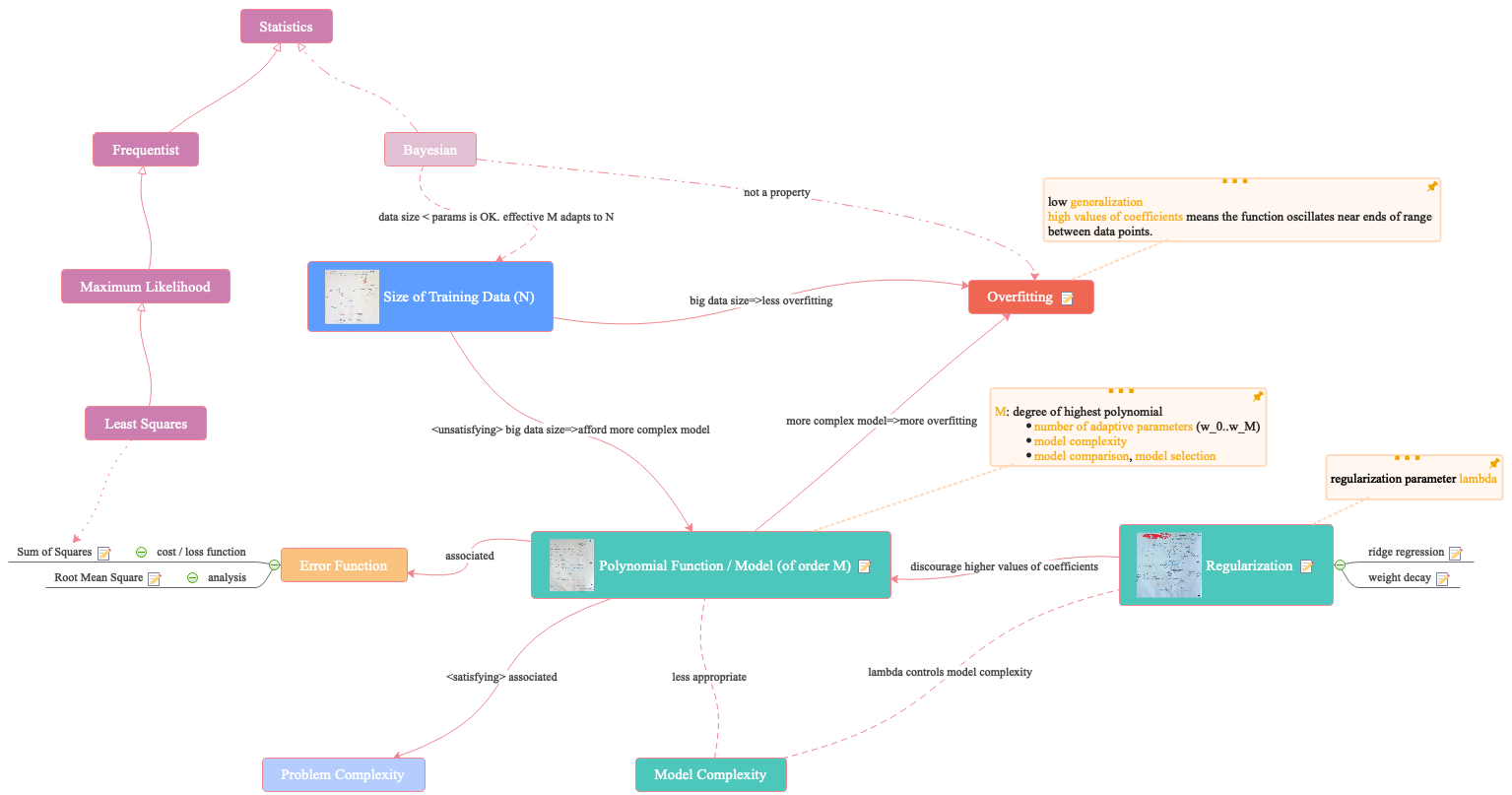 Not the answer you're looking for? Browse other questions tagged regression machine-learning optimization regularization polynomial or ask your own question.

4
Why does the accuracy not change, when applying different alpha values in L2 regularisation
1
Correct way to use polynomial regression in Python
3
Why do hypothesis functions with high degree or large number of features have high variance(tend to overfit)?
10
In linear regression why does regularisation penalise the parameter values as well?
2
What is the Cost Function for Neural Network with Dropout Regularisation?
1
Why in general is early stopping a good regularisation technique?
30
How can we explain the "bad reputation" of higher-order polynomials?