My data are very skew and I can't see any detail in a histogram. How do I see the shape?

I have a vector with income values of all companies that I found (n=1821). The income should look like a lognormal distribution, but if I use the hist function in R (RStudio) the result is this: 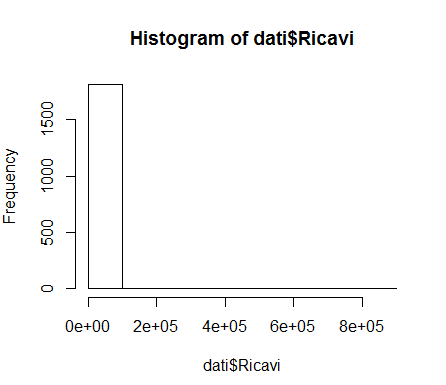 As you can see there are many values appear to be near 0, that's because lots of income values are 0 and many are quite small, and then there are a few incomes (about 10) with very high values.

What should I do to more clearly show the shape with a histogram?

Should I delete all 0 values from the vector?

I don't know how to proceed.

With or without exact zeros a histogram of a very skew distribution can look like this. It has nothing to do with the spread, nor with the existence of zeros, but with how far above the bulk of the data the largest observation is.

You're dealing with two different problems at once here --

$\:$ b. The default number of bins in R is a good deal too low for seeing the shape well in general and much too low when the distribution is skew or has heavy tails.

The second problem is easy to deal with -- use far more bins.

Obtaining a good display with very skewed data is not a single step process. It may take several attempts and some decision-making about how to best represent the information

If the data were actually lognormal with a large $\sigma$ parameter (and so very skew), it can look just like your plot. Here I generated some data (in "x", with n=1800) which has a particular lognormal distribution: 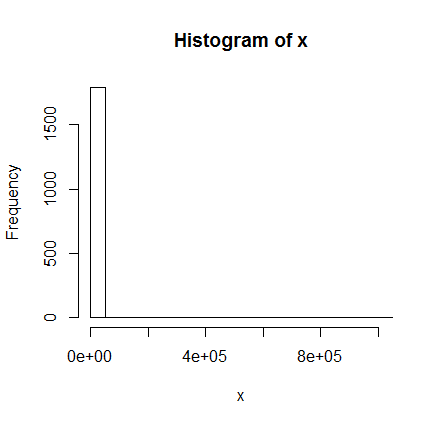 I made that plot have about twice as many bins that you got from the default, but it still didn't show any detail. How skewed is this? Well, the sample mean is about 8000 times as big as the median. Those large values dominate more than just the plot. (I made a second data set that's somewhat less skew, to show the potential value of some of the options I suggest)

The most obvious thing to do would be to plot on a log scale: 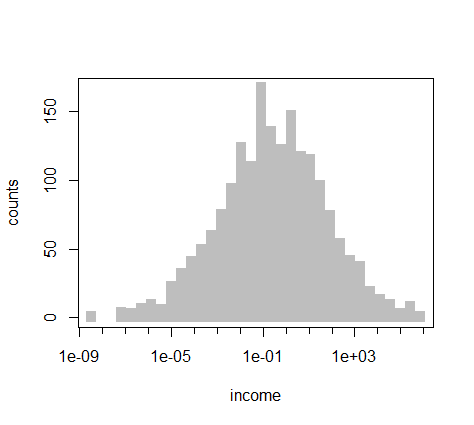 Note that the axis labels are in original values not log-currency, just as you'd get with plot(...,log="x") (in fact that's what I used to make this plot, after extracting the results of hist by putting it into a variable); I also added some detail on the x-axis but this isn't really necessary.

If you have exact zeros this approach of plotting on a log-scale is obviously not suitable for them as-is, since you can't take log of exact 0's (which are impossible in a lognormal; clearly you don't a lognormal).

How you might deal with them depends on what you're trying to do with the variable and how many there are.
(What's the actual proportion of exact zeros? You didn't say)

Anyway, here's the simplest step in the process of trying to find a suitable display:

Since someone is bound to ask, here's how I did the log-scale plot (absent additional fiddling with axis ticks):

(You need lwd wide enough that the bars just touch. You need lend to make the cars have square ends. You can make a version of "hist" to do this but it takes more work.)

Not the answer you're looking for? Browse other questions tagged distributions data-visualization lognormal-distribution histogram or ask your own question.

4
How to smooth histograms with bins 1, 2, 4, … wide?
6
How to perform a non-equi-spaced histogram in R?
6
Lognormal distribution from world bank quintiles PPP data
1
Comparing sets of noisy discontinuous curves / histograms
1
Lognormal parameters knowing GDP per-capita, Gini coefficient and quintile shares
4
How to Determine the Underlying Theoretical Distribution for a Sample Data Set
4
Are there theoretical reasons for choosing between similar distributions?
2
Formatting histograms in R