T-test vs. Permutation test on (not surely) normal data

This question follows my previous one. I will now provide my data in order to help you help me :)

As previously said, I have N=42 from a controlled experiment. People made a questionnaire assessing their mood and then played a videogame. They obtained a score from the game.

According to the questionnaire score, they may either be considered as "negative", "neutral" or "positive", respectively represented by the colors red, grey and green.

The following is the plot of the untouched data. 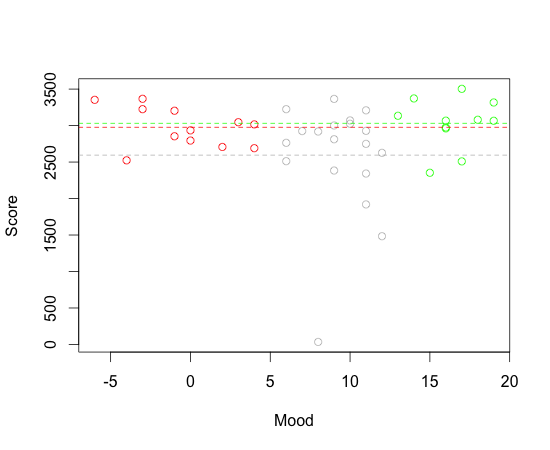 As I learned from the previous question, if the data is approximately Normal, I can use the T-test. Because histogram does not show interesting facts, I bootstrapped the score mean. 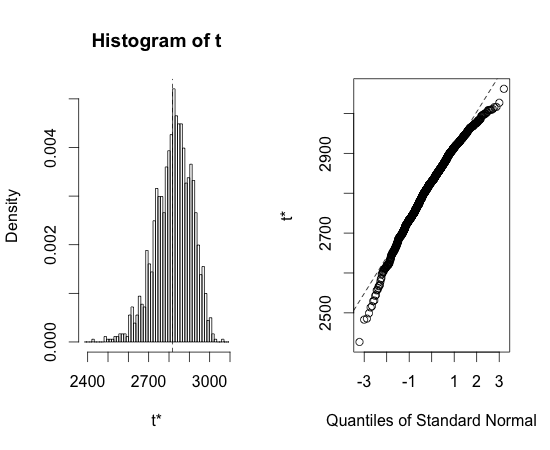 How much am I safe to perform the tests using the T-test? Shall I use a permutation test instead? Other thoughts?

Extra question: there is one subject that I consider as an outlier. He/she obtained a score < 5. What should I do with it? From what I learned, me shall never remove the outliers. But, since N is 42, it particularly affects the mean of its class (i.e., neutral)

Thank you again for your help.

Context: experiment that will be part of my MSc thesis and maybe a scientific paper.

Update: the dotted colored lines are the mean of scores the three groups

First, with respect to the outlier, I personally would remove it (with the permission of my advisor, of course) - a score of roughly 0 indicates that they couldn't figure out how to play the game, or they just plain hated it, or some other non mood-related factor which completely dominated everything else for that observation.

Second, since you're comparing three means rather than two, or so it seems from your description, you're really looking at an F-test rather than a t-test. A nonparametric alternative to the F test (which assumes Normality as does the t-test), is the Kruskal-Wallis test. It's quite efficient even at the Normal distribution. You might prefer the Jonckheere-Terpstra test, though, which tests against ordered alternatives and therefore would be more powerful given your actual alternative hypothesis.

However, it must be said that the t-test is quite robust with even a smallish sample size, except that outlier of yours would cause problems, no doubt about that.

19
What are essential rules for designing and producing plots?
1
How to compare two non-randomly selected groups within a sample?

0
Help with a one-sample permutation z-test
1
How to compare two non-randomly selected groups within a sample?
4
t-test or not, independent or not
0
Results of 2-sample t-test does not seem intuitive; wrong procedure?
2
Permutation test for model comparison?
0
T-test - Difference between p-Values of `stats.ttest_1samp`, `stats.ttest_rel` and `stats.ttest_ind`