What is “Descriptive Discriminant Analysis”?

I have found some references to "Descriptive Discriminant Analysis" or DDA. In particular, this paper recommends it as a follow-up to a significant MANOVA result. Briefly, it is described as "a statistical procedure which creates a set of perfectly uncorrelated linear equations that together model the differences among groups in the MANOVA".

However, I have found surprisingly little mention of DDA elsewhere, which made me wonder if it has a more common name, or if it has been superceded by other methods, or if it is in fact the same as Linear Discriminant Analysis (LDA). I have tried following up references within the above source, but other articles do not seem to make a distinction, and simply refer to discriminant analysis, or LDA. Here it is mentioned briefly in contrast to "predictive" discriminant analysis. I can see that there is a difference in motivation between simply wanting to describe differences among groups and wanting to predict group membership, but it is not clear to me why these different aims cannot both be met by an LDA.

DDA is implemented separately to Linear Discriminant Analysis (LDA) in the R package DiscriMiner. There the main reference is in French, which made me wonder if this is simply an issue of mis-translating the name of another test.

Does "Descriptive Discriminant Analysis" exist in its own right, and if so, how does it differ from Linear DA? 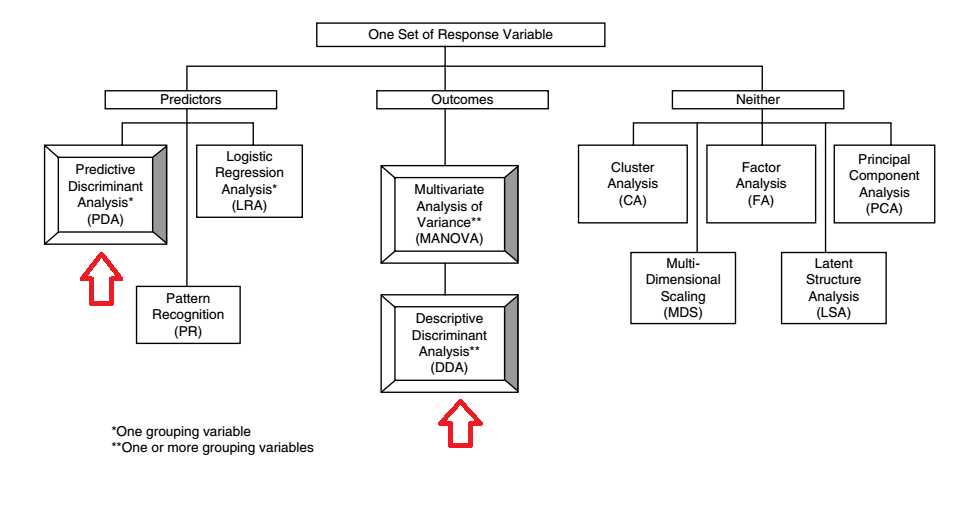 Not the answer you're looking for? Browse other questions tagged terminology discriminant-analysis or ask your own question.