How did scientists figure out the shape of the normal distribution probability density function?

This is probably an amateur question, but I am interested in how did the scientists come up with the shape of the normal distribution probability density function? Basically what bugs me is that for someone it would perhaps be more intuitive that the probability function of normally distributed data has a shape of an isosceles triangle rather than a bell curve, and how would you prove to such a person that the probability density function of all normally distributed data has a bell shape? By experiment? Or by some mathematical derivation?

After all what do we actually consider normally distributed data? Data that follows the probability pattern of a normal distribution, or something else?

"The Evolution of the Normal Distribution" by SAUL STAHL is the best source of information to answer pretty much all the questions in your post. I'll recite a few points for your convenience only, because you'll find the detailed discussion inside the paper.

This is probably an amateur question

No, it's an interesting question to anyone who uses statistics, because this is not covered in detail anywhere in standard courses.

Basically what bugs me is that for someone it would perhaps be more intuitive that the probability function of normally distributed data has a shape of an isosceles triangle rather than a bell curve, and how would you prove to such a person that the probability density function of all normally distributed data has a bell shape?

Look at this picture from the paper. It shows the error curves that Simpson came up with before Gaussian (Normal) was discovered to analyze experimental data. So, your intuition is spot on.

Yes, that's why they were called "error curves". The experiment was astronomical measurements. Astronomers struggled with measurement errors for centuries.

Or by some mathematical derivation?

Again, YES! Long story short: the analysis of errors in astronomical data led Gauss to his (aka Normal) distribution. These are the assumptions he used:

By the way, Laplace used a few different approaches, and also came up with his distribution too while working with astronomical data: 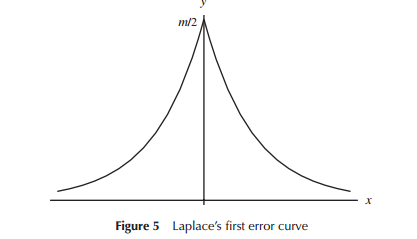 As to why normal distribution shows in experiment as measurement errors, here's a typical "hand-wavy" explanation physicist are used to give (a quote from Gerhard Bohm, Günter Zech, Introduction to Statistics and Data Analysis for Physicists p.85):

Many experimental signals follow to a very good approximation a normal distribution. This is due to the fact that they consist of the sum of many contributions and a consequence of the central limit theorem.

This is not the case; the distribution was known about before it was called the normal distribution.

The actual population distributions that data are drawn from are likely never actually normal, though it's sometimes quite a reasonable approximation.

This is typically true of almost all the distributions we apply to things in the real world -- they're models, not facts about the world. [As an example, if we make certain assumptions (those for a Poisson process), we can derive the Poisson distribution -- a widely used distribution. But are those assumptions ever exactly satisfied? Generally the best we can say (in the right situations) is that they're very nearly true.]

what do we actually consider normally distributed data? Data that follows the probability pattern of a normal distribution, or something else?

I don't see why this is necessarily more intuitive. It's certainly simpler.

Basically my question is why does the normal distribution probability density function has a bell shape and not any other?

The functional form of the thing that is called the normal density function gives it that shape. Consider the standard normal (for simplicity; every other normal has the same shape, differing only in scale and location):

this defines the value of the density at every value of $x$, so it completely describes the shape of the density. That mathematical object is the thing we attach the label "normal distribution" to. There's nothing special about the name; it's just a label we attach to the distribution. It's had many names (and is still called different things by different people).

While some people have regarded the normal distribution as somehow "usual" it's really only in particular sets of situations that you even tend to see it as an approximation.

The discovery of the distribution is usually credited to de Moivre (as an approximation to the binomial). He in effect derived the functional form when trying to approximate binomial coefficients (/binomial probabilities) to approximate otherwise tedious calculations but - while he does effectively derive the form of the normal distribution - he doesn't seem to have thought about his approximation as a probability distribution, though some authors do suggest that he did. A certain amount of interpretation is required so there's scope for differences in that interpretation.

Gauss and Laplace did work on it in the early 1800s; Gauss wrote about it in 1809 (in connection with it being the distribution for which the mean is the MLE of the center) and Laplace in 1810, as an approximation to the distribution of sums of symmetric random variables. A decade later Laplace gives an early form of central limit theorem, for discrete and for continuous variables.

Early names for the distribution include the law of error, the law of frequency of errors, and it was also named after both Laplace and Gauss, sometimes jointly.

The term "normal" was used to describe the distribution independently by three different authors in the 1870s (Peirce, Lexis and Galton), the first in 1873 and the other two in 1877. This is more than sixty years after the work by Gauss and Laplace and more than twice that since de Moivre's approximation. Galton's use of it was probably most influential but he used the term "normal" in relation to it only once in that 1877 work (mostly calling it "the law of deviation").

However, in the 1880s Galton used the adjective "normal" in relation to the distribution numerous times (e.g. as the "normal curve" in 1889), and he in turn had a lot of influence on later statisticians in the UK (especially Karl Pearson). He didn't say why he used the term "normal" in this way, but presumably meant it in the sense of "typical" or "usual".

The first explicit use of the phrase "normal distribution" appears to be by Karl Pearson; he certainly uses it in 1894, though he claims to have used it long before (a claim I would view with some caution).

Miller, Jeff
"Earliest Known Uses of Some of the Words of Mathematics:"
Normal distribution (Entry by John Aldrich)
http://jeff560.tripod.com/n.html

The question is why would we expect this particular distribution to be common in nature, and why is it so often used as an approximation even when the real data does not exactly follow that distribution? (Real data is often found to have a "fat tail", i.e. values far from the mean are much more common than the normal distribution would predict).

To put it another way, what is special about the normal distribution?

To express this in ordinary language, if you are given only the mean (central point) and variance (width) of a distribution, and you assume nothing else whatsoever about it, you will be forced to draw a normal distribution. Anything else requires additional information (in the sense of Shannon information theory), for example skewness, to determine it.

The principle of maximum entropy was introduced by E.T. Jaynes as a way of determining reasonable priors in Bayesian inference, and I think he was the first to draw attention to this property.

See this for further discussion: http://www.inf.fu-berlin.de/inst/ag-ki/rojas_home/documents/tutorials/Gaussian-distribution.pdf

To put this into more tangible terms, consider a single random variable, such as flipping a fair coin (2 equally possible outcomes). The odds of getting a particular outcome is 1/2 for heads and 1/2 for tails.

The more coins you use, and the more times you flip the coins, the closer the graph will come to looking like a Gaussian bell curve. That's what the Central Limit Theorem asserts.

I recommend you take a class in Mathematical Statistics if you want to see how mathematicians determined that the Normal Distribution is actually the mathematically correct function for the bell curve.

There are some excellent answers on this thread. I can't help feeling the OP wasn't asking the same question as everyone wants to answer. I get that, though, because this is close to being one of the most exciting questions to answer - I actually found it because I was hoping someone had the question "How do we know the normal PDF is a PDF?" and I searched for it. But I think the answer to the question may be to demonstrate the origin of the normal distribution.

But I am again tempted to get very deep into the proof that this happens, and I don't know that is what the OP wanted. If interested, it is explained here. Just know that we can "easily" prove that the limit of the binomial distribution as $n\to\infty$ and $p\to0$ such that $np=1$ is a normal distribution.

If I dump 100 coins on the ground right now and count how many heads I get, I might count 0 heads, or I might count 100 heads, but I'm way more likely to count a number somewhere in between. Do you see why this histogram should be bell shaped?

Here is the exposition by Jaynes

Not the answer you're looking for? Browse other questions tagged normal-distribution history or ask your own question.