How to sample value from Symmetric Geometric Distribution

How can I sample a value from a symmetric geometric distribution, as defined in this link.

As such, my question is actually twofold:

for integer $\theta$. This seems to be the only way to get the correct variance, and it is the same as the given formula up to a scalar. As Glen_b said, a draw from this distirbution can be obtained by drawing from a geometric distirbution and multiplying the result by a uniform random choice of $+1$ or $-1$. You can work this out by hand and/or verify it by simulation.

I also agree that the intention is probably that the proposed value $\theta_{new}$ is meant to be $\theta + x$ where $x$ is a random draw from $f$. This is the only way I can see for the text in your link to make sense.

Unfortunately, we cannot know for sure because we don't have access to the source!

Discrete Laplace distribution is a very similar to the one you describe (check Inusah and Kozubowski, 2006, and Kotz, Kozubowski and Podgorski, 2012).

Sampling from it is straightforward: you draw $U$ and $V$ from geometric distribution parametrized by $q = 1-p$, and then take $U-V$. 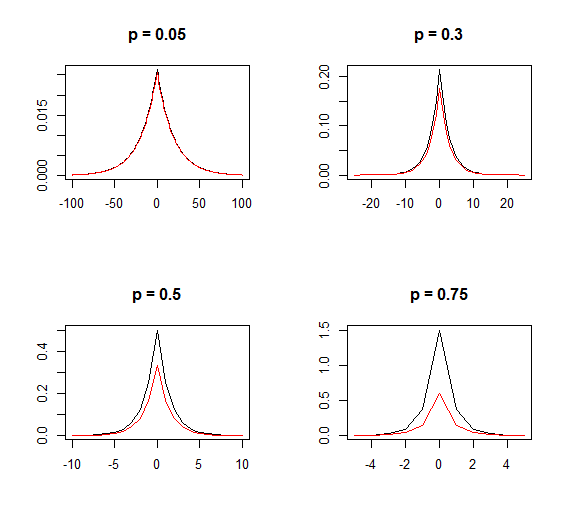 The linked document is unclear; it doesn't even indicate the random variable (which I will call $X$). I assume it means $p_g$ & $\theta$ are parameters. It doesn't define the values taken by $X$ - which I believe should appear in the exponent as $|x-\theta|$ not as $|\theta|$ - nor the values taken by $\theta$ (which I presume to be integer) and it refers to the distribution as discrete but calls it a density.

I believe a correct implementation of a "symmetric geometric" is as follows:

(note the change in the denominator also)

This distribution has the property that as you move out from the center, the ratio of probability to the next probability further into the tail remains constant (in geometric ratio). This is what makes it "geometric". 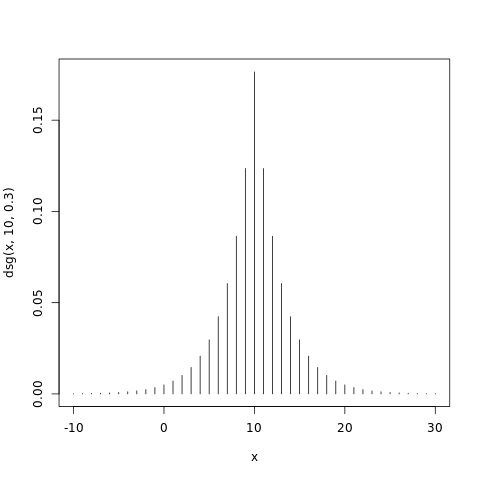 As you see it's symmetric, geometric and centered at $\theta$.

If the distribution has (sub)exponential tails, that should work fine as a proposal.

What they attempted to define (but failed to) is slightly different:

This is not in geometric ratio, because the central spike is twice the height it should be to be in the same ratio to the values either side as those values are to the ones further out again.

While I don't think it merits the names symmetric geometric, this distribution can be generated by generating a geometric (the version indexed from 0), attaching a random sign and shifting by $\theta$ (i.e. add $\theta$).

(The one I defined in the beginning is slightly more complicated to generate, but one way to do it is as above but if you generate a $-0$ you throw it out and generate again.)

A different one suitable for heavier tails would be a discrete equivalent of a table-mountain distribution, such as

(specifically with $s=2$ for the usual table mountain proposal).

This is effectively a symmetric version of a zeta(s) distribution with a "flat" bit at $\theta$ (in that it has the same probability as the values either side of it). You could replace the value in the numerator at $\theta$ (i.e. $1$) with an arbitrary positive value (if you also fix the denominator), or expand the "flat" part (ditto) or use a different $s$ if needed.

Not the answer you're looking for? Browse other questions tagged distributions sas random-generation geometric-distribution or ask your own question.