How does linear discriminant analysis reduce the dimensions?

There are words from "The Elements of Statistical Learning" on page 91:

The K centroids in p-dimensional input space span at most K-1 dimensional subspace, and if p is much larger than K, this will be a considerable drop in dimension.

There is no explain in the book and I didn't find the answer from related papers. 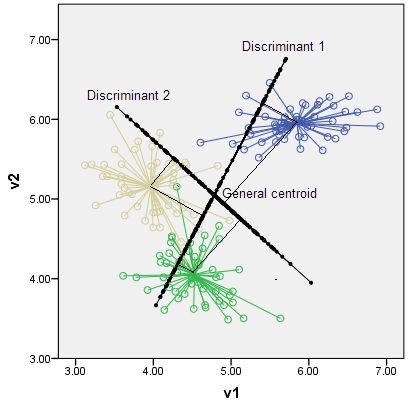 Algebra of LDA at the extraction phase is here.

While "The Elements of Statistical Learning" is a brilliant book, it requires a relatively high level of knowledge to get the most from it. There are many other resources on the web to help you to understand the topics in the book.

Two points in any dimension can be joined by a line, and a line is one dimensional. This is an example of a K-1 = 2-1 = 1 dimensional subspace.

Now, in this simple example, the set of data points will be scattered in two-dimensional space. The points will be represented by (x,y), so for example you could have data points such as (1,2), (2,1), (9,10), (13,13). Now, using linear discriminant analysis to create two groups A and B will result in the data points being classified as belonging to group A or to group B such that certain properties are satisfied. Linear discriminant analysis attempts to maximize the variance between the groups compared to the variance within the groups.

The Centroids are simply 2 points and they span a 1-dimensional line which joins them together. 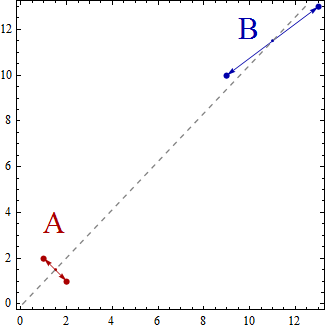 If you had three groups (and say three dimensional data points) then you would get three centroids, simply three points, and three points in 3D space define a two dimensional plane. Again the rule K-1 = 3-1 = 2 dimensions.

I suggest you search the web for resources that will help explain and expand on the simple introduction I have given; for example http://www.music.mcgill.ca/~ich/classes/mumt611_07/classifiers/lda_theory.pdf

Not the answer you're looking for? Browse other questions tagged machine-learning discriminant-analysis or ask your own question.

0
Interpreting LDA graph in R
33
Three versions of discriminant analysis: differences and how to use them
27
How LDA, a classification technique, also serves as dimensionality reduction technique like PCA
16
Questions on PCA: when are PCs independent? why is PCA sensitive to scaling? why are PCs constrained to be orthogonal?
15
Algebra of LDA. Fisher discrimination power of a variable and Linear Discriminant Analysis
19
How is MANOVA related to LDA?
15
Meaning of "reconstruction error" in PCA and LDA
8
Dimensionality reduction technique to maximize separation of known clusters?
10
Sources' seeming disagreement on linear, quadratic and Fisher's discriminant analysis
9
Plotting a discriminant as line on scatterplot
See more linked questions