Consider an experiment where a square and diamond appear on a screen, one before the other, and participants are required to judge which came first. Manipulating the time interval between the two shapes and averaging responses to obtain the probability that participants respond "Square came first" typically yields s-shaped curves like: 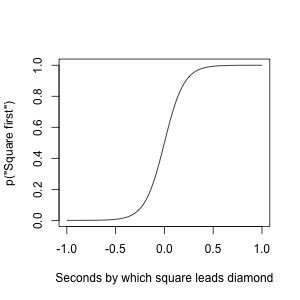 Now, I know that averaging responses to proportions within each of multiple participants is a bad idea, so presumably I'd want to analyze data from such experiments using a generalized mixed effects model with a link function that recognizes the binomial nature of the raw response data. However, I find the logit and probit links dissatisfying because they have a slope+intercept parameterization that confounds properties of the curve that have independent psychometric interest. Specifically, while the slope is indeed a parameter of interest (as it indexes perceptual sensitivity), the intercept is not. More interesting than the intercept is the shift of the curve, usually indexed by the point on the x-axis at which the curve hits p("square first")=.5.

To elaborate, consider an extension of the above related experiment where there are three groups of participants:

Presumably, the control group and distraction group should differ in terms of their slope, evaluated via:

Furthermore, presumably the biased group will differ from the other groups on the shift of the function. If I am willing to assume that the groups don't differ in terms of slope, then the shift can be assessed in a manner similar to above by evaluating a group effect on the intercept:

However, this approach to evaluating effects on shift breaks down if you cannot assume that slopes are not also affected by your predictor variable. Sure you can evaluate the assumption of no-effect-on-slopes as described above, but this not only leaves you in the lurch when you do find an effect on slopes, it is susceptible to the same criticisms of other approaches to assumption tests. Finally, even with the assumption of equal slopes, presumably this is an assumption that the slopes are equal on average; variability in the slopes will cause analysis-of-intercepts-as-a-proxy-for-shift to have lower power relative to a direct analysis of shifts (because the variance of the intercepts will represent the combined variance of the slopes and shifts).

P.S. I am aware that, given a set of maximum likelihood estimates for the slope and intercept parameter values, it is simply a matter of arithmetic to compute the ML estimate for the shift value. However, this does not pertain as it cannot be applied to the inferential procedures described above.

Your problem is not really the link function, but rather the parametrization of the linear predictor. Instead of having $\alpha + \beta x$, you would like to have $\beta (x - \delta)$. Here $\delta$ would be the "shift" parameter that you are interested in. While the two are mathematically equivalent ($\alpha = -\beta \delta$), they are not statistically equivalent. In fact, the second parametrization is not linear in its parameters, so it cannot be fitted with a linear model (generalized or not).

This also suggests the solution: you have to use a generalized non-linear mixed model. In R, the nlmer function of the lme4 package can be used. It is a bit more work to set up then the linear model, but should be doable.

For simple designs one solution might be to centre based on the psu of one condition. You could do an initial model of one condition, get the pss, recentre all of the data on that, and now your intercept will reflect changes in pss.

You'll still be stuck with a magnitude issue when there are interactions... but some issue somewhere is unavoidable.

Not the answer you're looking for? Browse other questions tagged mixed-model binomial-distribution psychometrics or ask your own question.

11
Is it appropriate to treat n-point Likert scale data as n trials from a binomial process?
1
Mixed-effect for Dichotomy/binomial variables?
3
How to deal with collinearity in lme with categorical IV with > 2 levels
7
In a mixed effects model, how do you determine when the slope and intercept should be independent?
3
Negative binomial vs binomial distribution for proportion data
4
Daily repeated measures with normalization
1
How to extract the slopes of single subjects in mixed model with two groups over time (longitudinal data, including interaction)
1
Mixed effects model with cross random effects and nested random effects