We are trying to fit a GLM that estimates the number of insurance claims made in a year using 6 independent variables.

The count variables are based on time frames (exposure) so to make it a fair comparison, we divide the count by exposure and call it frequency which gives an estimate of the counts you would expect in year.

The residuals vs. fits plot for frequency looks like: 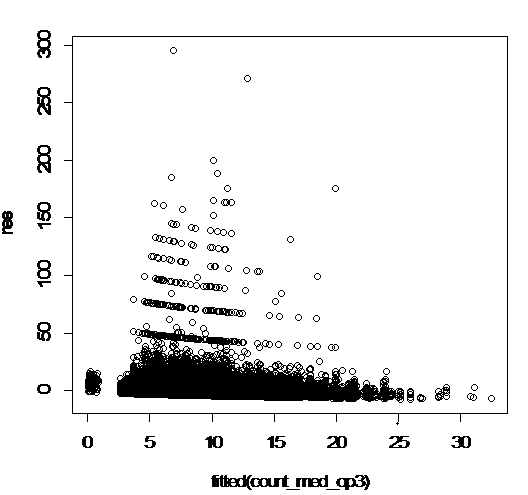 The problem is that a GLM modeling frequency with a poisson family is returning warnings as it is modeling a count variable and not getting integer values (as count/exposure often returns float values). Rounding the frequency response variable is not an option as it leads to other conceptual problems.

Should I ignore the warnings and use the fitted model?

You should not divide the counts by the exposure, but include the logarithm of exposure as an offset in the model, and then fit a poisson regression with log link function. See Goodness of fit and which model to choose linear regression or Poisson and When to use an offset in a Poisson regression? for details.

Not the answer you're looking for? Browse other questions tagged distributions poisson-regression residuals or ask your own question.

81
When to use an offset in a Poisson regression?
22
Goodness of fit and which model to choose linear regression or Poisson