Why there are two different logistic loss formulation / notations?

I have seen two types of logistic loss formulations. We can easily show they are identical, the only difference is the definition of the label $y$.

Am I right? Any other insights?

The nice thing about mathematical modeling is that it's flexible. These are indeed equivalent loss functions, but they derive from very different underlying models of the data.

for $p\in[0, 1]$. Using 0 and 1 as the indicator values lets us reduce the piecewise function on the far right to a concise expression.

This formulation is also a special case of the generalized linear model, which is formulated as $Y \sim D(\theta),\ g(Y) = \beta^T x$ for an invertible, differentiable function $g$ and a distribution $D$ in the exponential family.

This is the Lagrangian form of a constrained optimization problem. It is also an example of a regularized optimization problem with objective function $$ \ell(y, \beta) + \lambda \|\beta\|^2 $$ For some loss function $\ell$ and a scalar hyperparameter $\lambda$ that controls the amount of regularization (also called "shrinkage") applied to $\beta$. Hinge loss is just one of several drop-in possibilities for $\ell$, which also include the second $L(y, \beta^Tx)$ in your question.

I think @ssdecontrol had a very good answer. I just want to add some comments for the formula 2 for my own question.

The reason people like this formulation is that it is very concise, and it removes the "probability interpretation details".

The tricky notation is the $\hat y$, note, $y$ is a binary variable, but $\hat y$ here is a real number. Comparing to formulation 1, we need two additional steps to make it to discrete label, step 1. sigmod function step 2. apply 0.5 threshold. 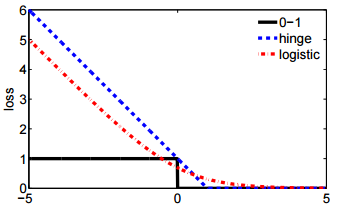 Here we plot three loss functions, x axis is $y \cdot \hat y$ and y axis is the loss value. Note, in all above formulas $\hat y$ is a real number, and this number can come from linear form $\beta^Tx$ or other forms. Such notation hides probability details.

Not the answer you're looking for? Browse other questions tagged logistic generalized-linear-model notation loss-functions or ask your own question.

12
How do you use the EM algorithm to calculate MLEs for a latent variable formulation of a zero inflated Poisson model?
3
Different CDF Notations
10
What is scikit-learn's LogisticRegression minimizing?
5
Alternative Confidence interval for Odds Ratio $\hat{p}\over{1-\hat{p}}$ from Logistic Regression?
19
Matrix notation for logistic regression
2
log odds to probability transformation confidence interval and interpretation
0
Negative Log-Likelihood Loss with Gibbs distribution for beta approaching infinity
3
Challenge an ICML Paper: For a given set of probability predictions and a log loss value, is the set of true labels giving such a loss unique?